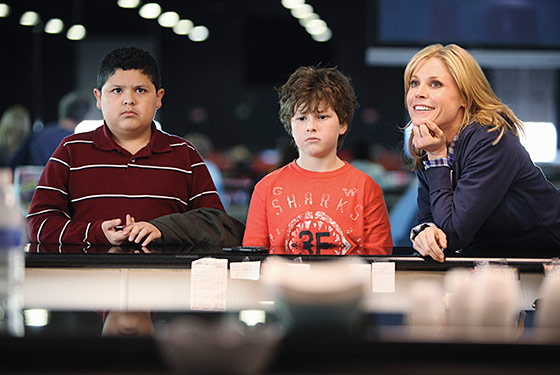 Wednesday night’s episode of Modern Family proved, I think, that the show can still have incredibly funny episodes when the family does not all come together. This week, the fam was separated into four different groups, and all four storylines were very funny.

This week, Claire decided that she and Phil would switch roles since she was tired of being the bad guy. Can you blame her? I know that Phil is the fun parent, but mouthing things behind Claire’s back as she reprimands the kids is pretty low.

So instead of making sure Haley and Alex cleaned their bathroom, Claire took Manny and Luke go-karting. I thought Julie Bowen played Claire’s manic, crazed idea of fun brilliantly. She kicked their butts in go-karting, convinced them to eat as much junk food as possible before driving as fast as possible, and the “fun” day ended with Luke puking all over the car. Her desperation terrified the kids, but it just made me laugh. She wanted so badly to out-fun Phil, but she’s just not that good at it.

Phil, however, struggled even more with his new role. After Haley and Alex lied and said they’d cleaned the bathroom just so they could leave for the mall, he kind of lost it. In fact, he really lost it – they’d poked the bear. He threw himself on the windshield of the car to prevent them from leaving, and then didn’t feed them all day. He was on such a power trip, and it was so unlike him, it was absolutely hilarious.

I’ll just say it right now – I would have gone to the Lady Gaga concert too. It’s Lady Gaga! And concert tickets are expensive! And it’s Lady Gaga! But of course, the point was, Cam would have stayed home if the roles are reversed. It’s always awkward, whether it’s in a relationship or just a friendship, if you are the less sensitive and caring person. I know because I am this person. Sure, that person would give you the shirt of their back, or skip out on a concert to blow your nose, or see the movie they don’t want to see just because you have no one else to go with. But we can’t all be that selfless, and Mitch and I? We definitely aren’t.

I’m happy that Mitch actually did end up seeing the concert, because that was the most realistic. And it’s not like it would be a dealbreaker for Cam. In fact, it’s actually better for Cam that Mitch lied and went to the show – now Cam can guilt trip him about it for the rest of their lives, and isn’t that better?

Meanwhile, Jay had to give out a dose of tough love when Gloria brought a stray home. A stray man, that is – the dog had a home. Apparently Gloria is always trying to help people out, which Jay hates. Again, I can see which character I am in this situation. The guy had a terrible business idea – a rewards system for dogs, where the dog gets a treat whether it’s good or bad – and Jay told it to him straight.

What I liked was that Jay wasn’t even that harsh. He told the guy nice things, too – that he was charismatic and winsome and just needed a better idea. But Gloria found the whole thing heartbreaking. In the end, it worked out though – the guy decided to go back to school. And, predictably, we learned that Jay can be a softie too. He’d originally refused to adopt the guy’s dog, but ended up giving to to Manny. It was a schmaltzy end to the storyline, but worth it just to see Manny’s face when Jay brought the dog back. And I loved Gloria’s reaction to Jay being all affectionate with the dog.

What did you think of “Good Cop Bad Dog”? Phil and Claire’s storyline was obviously the main event, but I thought the subplots held their own as well. And is Lily getting cute, or what? Now, check out these highlights: