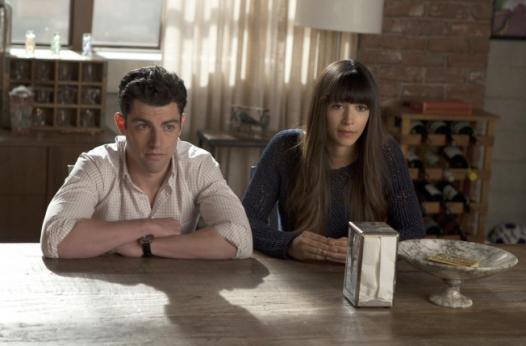 When your roommates sleep with your friends, it can only lead to trouble. That’s what we learned on New Girl last night, as Jess finally found out about Schmidt and CeCe’s not friends, benefits only status.

I predict there will be two schools of thought when it comes to Jess’s reaction to finding out about Schmidt and CeCe, so let’s address them both.

1. Jess is a brat, and was totally in the wrong

This school of thought would say that Jess acted like a total brat, and shouldn’t have had any problem with the idea of her roommate and her best friend sleeping together. Everyone’s an adult! They’re just having fun! It’s none of Jess’s business! Etc, etc.

2. CeCe and Schmidt are playing with fire, and Jess was right to be upset

This school of thought would say “But, Jess has to live with Schmidt all the time. When things go bad between him and CeCe, Jess will be the one dealing with an awkward living situation.” Also, CeCe hid the truth from Jess, who is supposed to be her best friend, for a really long time. No wonder Jess was upset!

I don’t care how you slice it, life can get awkward when two of your friends are hooking up. Especially if you’re living with one of them. And of course Jess was hurt that CeCe hadn’t told her! So I’m on Team Jess here – I would have been upset too.

As we know, Winston discovered CeCe and Schmidt naked in the back of Schmidt’s car at the Mexican border. And he couldn’t keep that to himself for long, so he told Nick – and Nick is terrible at keeping secrets. We saw this throughout the episode, as Nick hilariously tried to navigate the rough waters of hooking up with hot young co-eds and never calling them again. So as soon as Jess thought something was amiss, she got it out of Nick.

Jess, naturally, was upset. Especially because she realized Schmidt was the reason CeCe kept bailing on training for their 10k charity run. Now, I would never agree to a 10k charity run. BUT IF I DID (I would never) I wouldn’t bail on the training sessions because of some secret hanky-panky! That’s called being a bad friend.

Nick’s reaction to hearing the news was probably the funniest because of his physical tics, but Jess’s was pretty great, too. Unfortunately, the explosion of such a truth bomb meant a few more were going to be dropped.

Deciding there will be no more secrets is a slippery slope. One minute you’re shouting things about what one roommate said about another roommate behind his back, and the next minute you’re finding out that all three of your roommates have thought about you when they’re “self-completing”.

As for Jess and CeCe, the spat spiraled into an even bigger fight – CeCe told Jess that, actually no, she doesn’t confide everything to Jess the way Jess does to her. Because Jess is too judgey about mistakes CeCe makes with guys! Gasp! Truth bomb!

Pretty soon, everyone in the apartment was fighting – including two of Nick’s conquests, who both wanted a circle scarf that had been left behind. It took a massive, hilarious fit of rage from Winston to put a stop to all the shouting.

At the charity run, Jess and CeCe were both determined to beat each other. Unfortunately, Jess is a terrible runner and had no hope of winning. But when she saw Schmidt in his “See CeCe Run” T-shirt, which he said CeCe had found funny, she had an epiphany – CeCe likes Schmidt! CeCe admitted that Jess was right and the pals made up, crossing the finish line together with an embarrassing finish time of over three hours.

While I think CeCe’s feelings for Schmidt were a good place for the show to go, I kind of wish this spat between Jess and CeCe had lasted longer. It was revealing some interesting things about their friendship. Obviously CeCe had been hiding things from Jess long before Schmidt came along, so blaming her secret-keeping on her feelings for him felt like a cop out.

Overall I thought “Secrets” had some hilarious moments, but wasn’t my favorite episode New Girl has done lately. What did you guys think?

And perhaps best of all, Winston trying to wrap his mind around why CeCe would sleep with Schmidt:

“Are you trying to get back at your parents?”
“Is it a pity thing?”
“Is he sick?”
“Are you working for the government?”
“Are you tired of being turned on?”
“Do you have a mole fetish?”
“Is it huge? I’m sorry, let me rephrase that: Is it huge?”