Well the day started just like this: Alarm went off 1.5 hrs. too late. Cut to this frantic cricket running around my apartment, chirping expletives, until…I pause with the realization that: “Wait, Nova 7 comes out today!” And then it was allll gooood. Well, in a matter of speaking- I was still uber-late for work.
However, once 5pm rolled around, I was ready to head down to Bishop’s Cellar for the release of Benjamin Bridge’s highly anticipated launch of Nova 7, their sparkling wine made in the method classique.
Ah the anticipation- I look, I smell, I taste. I was warned ahead of time that this was one of those ‘Dangerously Drinkable’ wines; one that you can gulp down easily. And it certainly lived up to its name.
Slightly more tropical than last year’s vintage, this year’s batch is brimming with the sweet, yet subtle flavour of lychee and grapefruit. With a light, delicate effervescence, it’s a sparkling wine that doesn’t assault your palate with bubbles, but gives it a suggestive tickle instead. With a touch of honeyed sweetness, I could think of only one way to sum it up: Benjamin Bridge’s Nova 7 is Nova Scotia’s nectar.
Buy up kids! I have a feeling that the past will repeat itself, and that this year’s batch won’t be around for long… 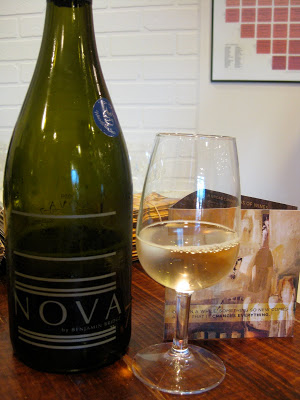