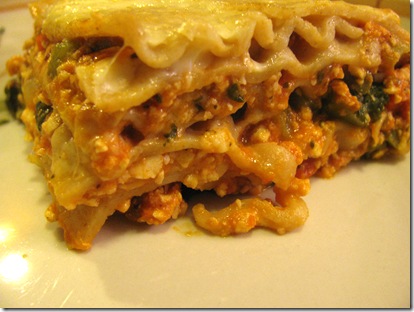 I never buy tofu, but for some reason decided to try a block of the Liberte Firm Tofu that I spotted at Planet Organic.  It was nearing the end of it’s fridge life and I needed to decide how I was going to put it to use.  I thought about the “go to” stir fry, but decided I also hadn’t had lasagna in a while, so why not make a vegetarian lasagna using the tofu!

Everyone knows how to make lasagna, but I’ll share with you the way I made this one since I was having fun snapping pics as I went along and since it was a “make it up as you go” experiment!

To get started, I got my whole wheat lasagna noodles bubbling away with some added Sea Salt.  I never understand why people don’t always use whole wheat noodles.  I actually prefer them and you definitely do not lose any flavour with this substitution, if anything you gain it as well as the addition of plenty of extra healthy fibre that won’t disappear into your digestive system the instant that it hits it.  Deal? Okay sold. 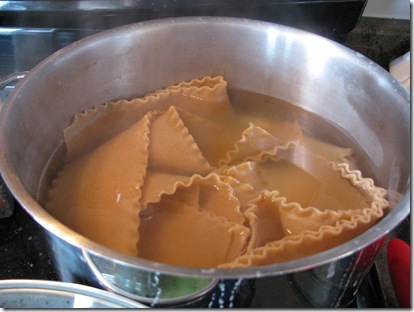 I decided I was going to load up this recipe with tons of veggies and lots of big chunks of fresh white button mushrooms which I LOVE in lasagna and spaghetti. In the pan went some EVOO and FOUR sliced (not minced) cloves of garlic (which I sliced up in a snap with the garlic slicer that I got from The Pampered Chef (and totally forgot to take a photo) and infused the EVOO with the garlic.  Sliced garlic has a longer life in the pan than minced and doesn’t burn as quickly, so in this case works better to infuse the garlic flavour into the oil  Too bad I didn’t snap a pic to show off the beautiful browning garlic  The pictures don’t smell as good as real life anyway.  Eventually I’m sure there will be “scratch n’ sniff” food blog photos, but for now we’re outta luck ;-)  In my opinion, you can never have too much garlic in lasagna or spaghetti.  After only a short time when the garlic started to brown, I added a chopped:

Here’s where you let your taste preference guide you because you can add whatever seasonings you prefer to add in lasagna.  I seasoned with salt, pepper, dried basil, dried oregano, garlic powder and since there was no fresh basil available (my favourite herb ever) nor did I have any frozen cubes in the freezer, I added a big squirt of the Basil Herb Blend from the tube. 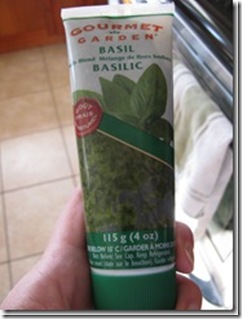 After I let the veggies cook, I added whatever was left of my fresh spinach to the mix and let it wilt down.  I usually add thawed frozen spinach to my ricotta or cottage cheese layer that I sometimes include, but have found this to be one of the main contributing factors to making the lasagna fairly runny in the end no matter how much I squeeze out the moisture, so adding fresh spinach to the sauce was my attempt this time around. 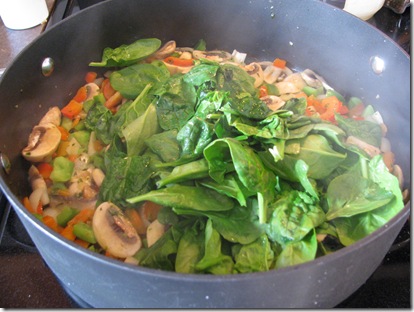 Now I’m not “used” to working with tofu so I wasn’t sure how I was going to include it into the recipe.  Was I going to slice it thin and include it as a layer or crumble it up in the sauce?  One of the things that sometimes happens when I make lasagna is that it the sauce sometimes remains a bit runny and when you cut out a piece, sauce from the rest of it starts to pour into the empty parts of the pan.  Has this ever happened to you?  I wasn’t sure, but I figured that tofu may have a decent “absorbency” quality that may help with that, so I decided that I’d fire up the ol’ KitchenAid Food Processor (any excuse to put my “Harley” to use of course) and pulse it into fine pieces to be added into the sauce.  Out of caution, I cut the block into 5 or 6 pieces and patted with a paper towel first. 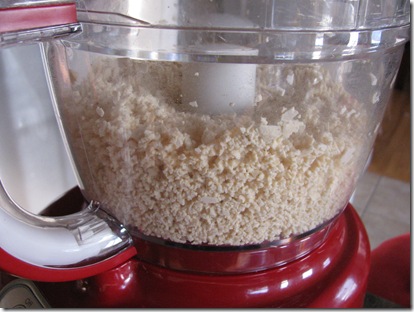 I had no idea if it was too much or too little, but I added the whole block to the mix: 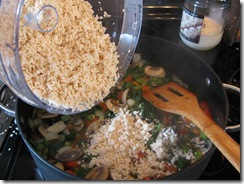 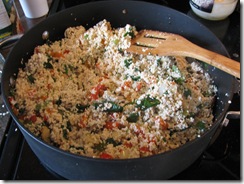 Next up was adding the tomato sauce.  Choosing a good flavour of tomato sauce is always so key in making a good lasagna.  This time around I chose a can of Basil & Romano flavour: 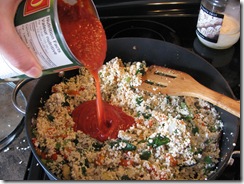 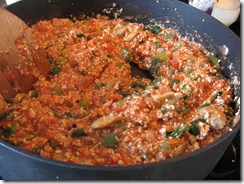 It created a really thick sauce which I decided was probably a good thing and meant it wouldn’t leave a runny lasagna!  I also noticed that it also resembled like it already had “cottage cheese” so decided I was going to go ahead without the cottage cheese layer entirely and see how it turned out.

Of course you have to add freshly grated Parmesan Reggiano!  I add some to the sauce as well as a few sprinkles in the layers too: 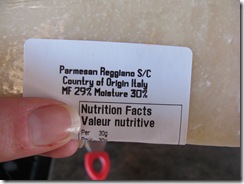 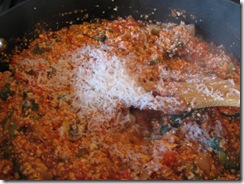 I gave it a few taste tests, tinkered with some more of the seasonings above and it was ready to assemble for the oven. And just for the helluvit to ensure that the sauce would hold it’s own, I added one scrambled egg to the sauce mixture before assembling. 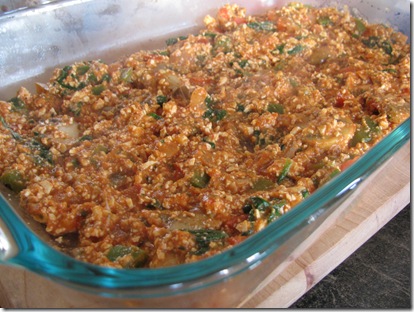 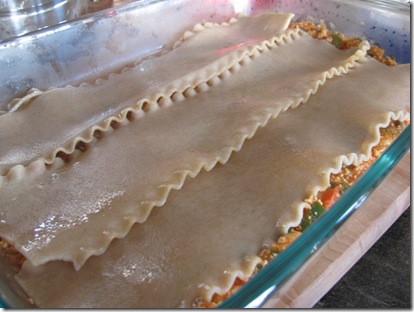 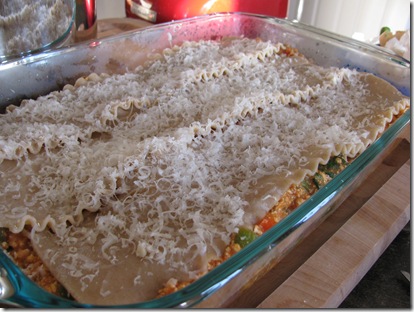 Repeat all the way to the top: 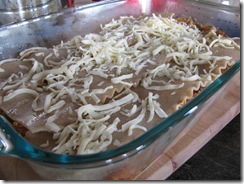 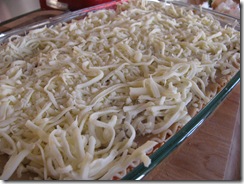 Baked in the oven at 350 until bubbly and golden!  I let it rest for about 10-15 minutes after coming out of the oven and I gotta tell ya, there was nothing runny about this lasagna at ALL.  No sauce creeped into the pan or all over your plate and it tasted absolutely devine!  In fact, it was AS good if not BETTER than many meat lasagnas (including turkey) that I’ve ever made! You could fool any unsuspecting person that it was cottage cheese instead of tofu and you would never know the difference because it had the exact same texture! So all in all this is a very healthified version of lasagna and you are in complete control of how much cheese you wish to add! 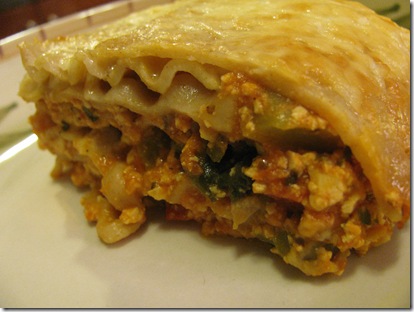 Secret: I ate this every day for at least 4 days until I was forced to freeze up the rest of the leftovers 🙂

Try it and ENJOY!