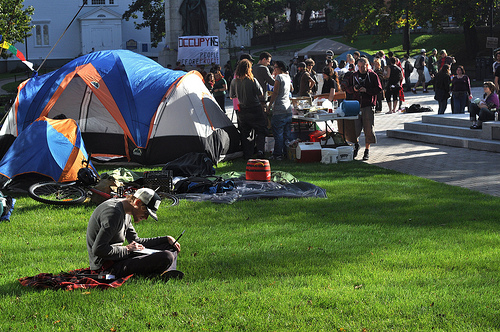 After receiving what is effectively an eviction notice from City Hall yesterday, Occupy Nova Scotia members are considering their next course of action. Mayor Peter Kelly has told the group to return Grand Parade to the public by Nov 6 in order to accommodate upcoming Remembrance Day services, and suggests the group relocate to the Commons. In an article in today's Metro spokespeople for the Occupy movement say they would like a meeting with Mayor Kelly and city officials to see if a compromise can be agreed upon.

According to the article, about 70 Occupy members have been camped out in the square for nearly two weeks, and given it's symbolic nature — right in front of City Hall, protesters feel that it is the best location to express the ideals and message of the Occupy movement. Mayor Kelly has not said what will happen if they decide not to move, but that he is no rush having given them "lots of time".

We want to hear from you Haligonia: Should the protesters, who have been peaceful thus far, be made to move to the Commons? How much longer do you think the movement will remain camped out? Do you think the Occupy cause has had the intended impact its members have hoped for here in Halifax? Why hasn't Mayor Kelly reached out to participants to hear their concerns?