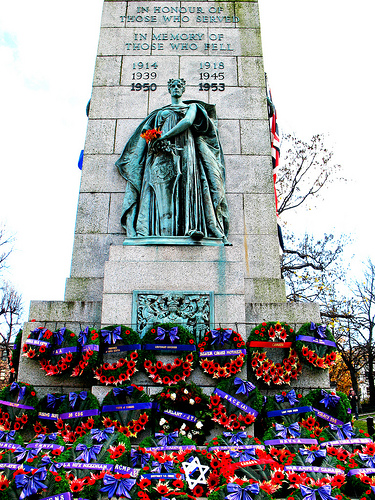 On Remembrance Day, Canadian war heroes are remembered and lauded across this country.  But it’s a selective memory. Many of these heroes are from visible minorities and remain, to this day, largely invisible. For the youth of our nation, of whom fewer and fewer attend Remembrance Day ceremonies every year, the stories and bravery of these unsung veterans are at risk of being lost. Of being forgotten.

Starting at 7pm on Saturday, November 5 at the VIA Rail Station, 1161 Hollis St. in  Halifax, ‘Remember Me’ will bring together choirs and performers of all ages to recognize the unsung and under-sung heroes of the First and Second World Wars. Along with the veterans who are traditionally celebrated at these occasions ‘Remember Me’ features Acadian singer Suzie LeBlanc, young spoken word artists and slam poets from the Aboriginal, Acadian and African Nova Scotian communities, a live performance of a new “Remember Me” video set to be released on November 11 on You Tube, the Wekatesk Singers from Membertou First Nation, the UFC Gospel Choir, the Confederation Centre Youth Choir from Charlottetown, the Studio Singers, Les Voix D’Acadie and storytellers Todd Labrador, Lynn McCarron and many more. The evening will conclude with the launch of a song “Remember Me”, especially written by Dawn Harwood-Jones to honour our Veterans. This free event is open to the public and we encourage members of the community to come out with their families to enjoy the tribute.

Highlights of the evening’s events include The Sons of Membertou, drummers from Membertou First Nation and a Grand Entry by Canadian Forces, RCMP and members of the Halifax Regional Police and will include the carrying of the Canadian Forces Eagle Staff.

By telling the stories of our veterans (including Aboriginal, Acadian and African-Canadians) through music, song and spoken word, the objective of ‘Remember Me’ is to stress the importance of the contributions made by these and all veterans so that a younger generation may have greater understanding of their sacrifices when fighting for privileges some enjoy today, though many of these unsung heroes were not afforded the same privileges themselves.

Radio Canada(French) plus local television EastLink Television will be recording the event for re-broadcast on November 11, VE Day, Battle of the Atlantic Day, and other days of significance in Canada’s history.  The night of the performance, the show will be live-streamed so that viewers can watch it anywhere in the world.

The ‘Remember Me’ event is funded by the Office of Aboriginal Affairs, the Office of Acadian Affairs, The Royal Canadian Legion, the NS Dept. of Communities, Culture and Heritage, The Municipality of the District of Chester, the D250 Youth Engagement Legacy Trust and Citizenship and Immigration Canada.

'Remember Me: A Tribute To Our Unsung Heroes' Broadcast Event To Be Held In Halifax
https://haligonia.ca/remember-me-a-tribute-to-our-unsung-heroes-broadcast-event-to-be-held-in-halifax-47247/