After a late night of packing and getting things tidied up around the house, I managed to get 3 hours sleep when I found myself wide awake at 3 a.m.!  I couldn’t fall back to sleep for the life of me, so I decided to get up and get ready for our day of travel, rather than risk falling back to sleep 20 mins before having to be up and then feel worse!

I was worried about how checking in, security and customs was going to go because we realized that my ticket was booked in my maiden name under my old profile and my new passport and all of my other identification is in my married name.  Luckily I noticed it in advance and called and was told to bring my marriage certificate.  I was still suspect that all would go smoothly with TSA and arrived 3 hours before departure just in case there was any re-issuance of tickets and advance time before departure policies flying internationally.  But all went smoothly and we were actually there waiting for the people to show up at the ticket counter at Delta.

But all was well, got through a zero line up at the new international security section (where the lineup for the other security was LONG!), didn’t get flagged for the random x-ray “peek-a-boo machine where they can see you in your birthday suit and we were on our way to grab some much needed breakfast at the restaurant on the other side of security.  Turned out that “The Spirit of the Maritimes” "restaurant" was nothing of the sort.  It had the general standard breakfast items available on the menu which you assume can’t be really bad because they are “standard”, but when the only option to have your eggs are “scrambled” it kind of tells ya right from the get go.  I got a Western sandwich which is pretty much egg, ham, peppers, onions & mushrooms between some toast with some hash browns and OMG it was the worst breakfast ever made ever!  I’m all for microwaved eggs because I do it all the time, but I’m pretty sure not only was it was all microwaved together but I don’t think it was actually “real” egg, just some sort of “egg mix.”  Ewwww.  I ended up eating a few bites of the egg and then spreading some PB&J on the toast that came with the sandwich, had some water and OJ and relied on my trail mix and cashews for the first leg.  On the flight I had a club soda with crab-apple cocktail & some airline cookies to our first leg to Detroit.  We only had an hour from plane touching the ground in Detroit to our next gate to Orlando.  We landed on time, but taxied on the run way for about 25 mins (airports are bit bigger than in Halifax that’s for sure!) and our gate was a bit of a hike (god bless moving walkways!).  Despite being pressed for time, the fast walk to the gate was just what I needed after sitting for so long.  My back was getting sore and it was only a small plane so it was pretty cramped!  We got to our gate and the place was packed.  We only had about 10 minutes and realized it would be about 4 hours before we got to eat anything of substance and it was lunch time and, well, the need for food with the little peanut on board is a whole other ball game, so I knew I had to eat.  The only option was to grab the quickest thing right beside our gate which was pizza.  Not the healthiest option, but it was ooey gooey good and did the job.

We were lucky to be in “Zone 1” and got to be the first group to board the plane. I’ve never been on a plane that loaded by zones before, just by row.  It was a huge plane and once we got on it was easy to see why there were “zones”!  The plane was full, but somehow we lucked out and the third passenger sitting with us didn’t show, so I happily took advantage of not only the MUCH comfier seats, but the extra seat beside me.  We were both pretty tired and managed to sneak a short nap on the plane – if you can call them naps. I don’t think you actually “sleep” on the plane, just rest.  I snacked on my pre-packed Kashi crackers and a squeeze pack of Justin’s almond butter (compliments of Janna), snagged a few of hubby’s pretzels, another airline cookie was ended up being perfect dipped in my tea.

We landed in Orlando and after stepping out of the gate runway into the airport I was immediately taken back by the humidity (much like it was in Cuba) and surprised by the AMOUNT OF PEOPLE that were camped out at all the gates waiting for their flights.  I’ve never seen so many people at an airport.  Most of my “big” airport experience were stop overs, some of which were red-eyes, so there’s not a lot of people around during that time even when the airports were huge.  Even the Toronto airport didn’t seem to be as crowded as this one when I travelled last June during a peek time of day.  We made our way to the baggage claim taking the sardine style tram from our gate to the baggage claim. 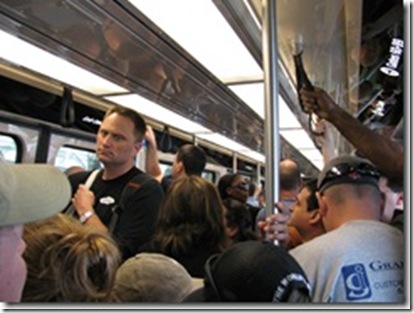 I gotta say, even though there were thousands of people coming and going, it was really really efficient.  We got our bags after waiting for a while with four huge flights of people waiting for their bags at the same place and then off we were to get our car! There was this one time when dude didn’t want to let me scootch in front of him when he was hogging the space in front of the belt when I thought I saw our bags.  I, being the “apologetic Canadian,” of course tells him I’m sorry and explained by I had to step in front of him (even though it was obvious) and he was all surprised that I took the time to explain and I saw his face turn nice for a sec when he was otherwise frustrated and anxiously waiting for his bags.  That is not to say that there were a lot of rude people around, because there weren’t.  Most people were courteous, but it just shows how a little human interaction and a common courtesy exchange with a stranger can go a long way 🙂

Then it was time to get our wheels!

Here’s where you really start to get some perspective from smaller cities like Halifax.  In Halifax, there are about 3 car rental counters at our airport to rent cars from.  In Orlando, there was an entire section about five times the length of our airline ticket counters for car rentals. We found ours (of course near the end of the long line!) and as I told you guys before, we got a steal of a deal when we booked our flights that we snagged a convertible for an amazing deal for the entire 10 day stay.  In fact, the lady who was helping hubby had to ask him how in the heck he got that deal because she wasn’t even able to sell us an economy car for ten days at that price!  One thing I have learned with hubby is that almost nothing makes him more happy than getting a good deal. I think that lady made his vacation by telling him that! lol  So we head off to pick up our car and realize there’s no specific car “assigned” to us on our rental papers and we got to go and take our pick of a long row of beautiful brand new convertibles!  Woot!  All the keys were in the cars and the trunks were open.  There was one red one left, so of COURSE we had to take the red one!  We drive up to the exit check point and they just scan the car on its bar code like we’re at the grocery store picking up a jug of milk and we’re on our way!  Of course, as you can imagine, the top was already down before we even left the parking lot and ya knows they get their kicks out of goofy tourists like us!   We didn’t care though!

It was a cloudy but humid and hot afternoon, so the top down was a great thing even with a few sun shower sprinkles here and there.  I quickly realized I really should have packed my head band after all.  Looks like a head band is going on my shopping list! We fire up the GPS and were on our way to our condo! We were only about 20 mins away from the airport so it was great. I cannot tell you how valuable it is to have a GPS while driving in a strange location on vacation.  We always go on and on about how they just completely remove all the stress involved with driving on crazy highways not knowing what exits and what turns to take.  I am not a map reader and especially on the fly while driving in the car so if anyone is not sure if they “need” one or not, I’m telling you they are worth every.single.penny.

The condo was perfect, so clean and classy and we take a stroll around the grounds of the gated community that we’re in.  It actually reminds me a lot of the resorts we’ve stayed at in Cuba only without the crowds.  It felt pretty much vacant with no one in the pool or hot tub or playing tennis or volleyball or in the lobby or gym.  It was nearing around 5 by then, but I was surprised there wasn’t anyone around.  Not the worst thing in the world when you’re there to relax and not party it up.  Looking forward to jumping in the pool! Only complaint so far is that our wireless internet is not working!! Still waiting on the condo owners to fix it.  pfffftttttttt

We then left in search for some food!  A quick GPS check showed an Outback Steakhouse and we figured a good meal after a day of travel was a good idea, so off we went.  I was honestly toooo tired to take any pictures, but enjoyed their quesadillas, pumpernickel bread, a pink lemonade and the Victoria’s Filet with garlic mashed potatoes and fresh veggies.  I also tasted the best sweet potato ever that hubby had on his side – it was awesome.

Even though we were exhausted, we hit up Whole Foods to stock up on some groceries for the week: 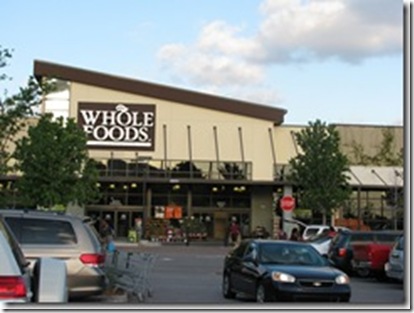 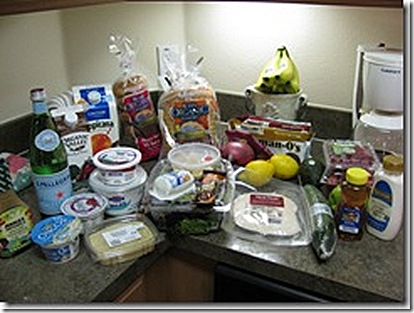 After that I was as good as done and could NOT keep my eyes open at ALL, next thing I know I mumbling something about going to bed after falling asleep on the couch and I crash into the huge king sized bed for the night….bliss!

Right now our wireless connection isn’t working and we’re still waiting to hear back from the property owners as to why, so I can’t actually post my blog or check my email!  I have my Blackberry turned off to avoid monsterous data and roaming charges using another network, so hopefully that will get worked out soon!