Thursday night’s episode of Parks and Recreation had everything you could ask for and more. There was some slightly psycho Leslie Knope. There was Ron Swanson. There was meat. There were more than a couple references to how fat Pawnee citizens are. And there was an awesome shot of April holding scissors and looking incredibly dangerous. All in all, it was fantastic.

Parker Posey guest-starred as Lindsay Carlisle-Shea, Leslie’s once upon a time BFF (when she was 35 lbs. heavier and had a bigger nose) and now arch nemesis. Yes, she worked for the Parks Department over at Pawnee’s taller, skinnier, richer, prettier neighboring town of Eagleton. And man, was she a bitch. She used to work at the Pawnee Parks Department with Leslie, but she left for a gig in Eagleton after Leslie turned down the job offer. They have better parks, better town hall meetings (Valet service, crepe stations and gift bags with iPod touches? Sign me up!), better citizens and even better jails. Their jails would make Pawnee spas look like jails. But you know what they didn’t have? Heart. Because that’s what people say when something sucks. 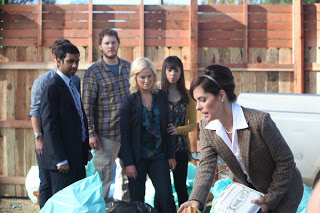 One of the best things about Leslie is her insane love for Pawnee, so it was fun to watch her get all riled up and sucked into this rivalry. It all started when Eagleton erected a fence to keep Pawnee trash (and by trash, I mean citizens) out of their nice half of a park. Leslie, naturally, was appalled. And like that wasn’t reason enough to hate Lindsay, she then sealed the deal by feeding a J.J.’s waffle to her dog. That’s an unforgivable waste. The feud culminated in Leslie pushing Lindsay into a pile of trash and literally belly-flopping on top of her, but that wasn’t even the best moment. No, the best part was Andy getting caught up in the moment and knocking Tom into the pile with one swipe from a bag of trash. I could watch that moment on replay all day long. Bam!

In the end, Leslie won the battle by starting up a whiffle ball team that attracted all the kids from Eagleton over to Pawnee. Take that, mean lady from You’ve Got Mail! Really, though, Leslie didn’t do it just to “win”. She did it because she’s awesome, and it helped close the gap between herself and Lindsay. I’m hoping we get to see Parker Posey again, because she was fantastic.

Meanwhile, Ron freaked out when he learned that Leslie had finally figured out when his birthday – a very private and closely guarded piece of information – was. He braced himself all week for a giant party that he’d hate, but he should have known better. Leslie didn’t plan a big to-do, she just set him up with an obscene amount of meat, scotch, and his favorite movie. It was like Ron Swanson heaven. There was even a bib from Mulligan’s, his beloved steak restaurant that closed. Watching Ron suffer throughout the whole episode was so, so funny.

There were so many fantastic, hilarious moments from the episode, there’s no way I caught them all in one viewing. But here are a few: