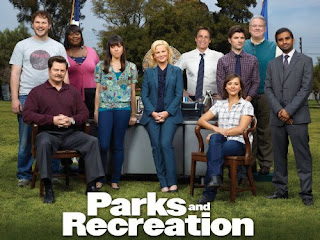 I don’t know if you can tell, but I am LITERALLY so happy that Ben and Leslie finally kissed on Parks and Recreation. And the best part? The episode was really, really good.

In the second half of a double feature on Thursday night, Ben and Leslie traveled together to Indianapolis in “Road Trip”. It was the perfect slow burn – in the previous episode we saw both characters privately address their feelings for one another, so the fact that they had to go on a road trip together was perfect.

Leslie, not wanting to risk her job, was desperate to make sure that nothing would happen between then. She wore an ugly track suit in the car, came up with horribly dull conversation topics, and had Ann help her burn the worst road trip CD of all time. But still, sparks were flying.

The episode struck just the right chord of sweet and funny. My heart pretty much melted when Ben confessed his feelings for Leslie by way of describing Pawnee while they pitched to host a Little League tournament.

The way things all worked out couldn’t have been funnier – Ben invited Leslie to have dinner with him and Leslie, desperate to prevent any romance, invited a random photographer along. No dice. So they went to a nice restaurant, had a few glasses of wine, Ben told Leslie how he felt, and then…Leslie excused herself to call Ann. The fact that Leslie would write herself a speech for Ann to read to convince herself not to go for it with Ben was so perfect. Of course, Leslie decided to go for it anyway. She’d had two and a half glasses of red wine and, oh yeah, they’re perfect for each other.

I laughed out loud so much when Leslie returned to the table to see Chris there. He’d driven to Indianapolis to celebrate with them! And they could stay in his condo! Yippee….

As though things couldn’t get worse, Chris revealed that night that he goes to the bathroom approximately 12 times a night. So there was no opportunity for a secret get-together.

I wasn’t disappointed for long, though. Back in Pawnee, Ben just kissed Leslie when she came by to drop off receipts. And what a kiss! Swoon. I can’t wait to see what happens next.

Obviously the whole road trip with Ben and Leslie was the best part of the episode, but I got a kick out of the subplots too. Tom’s Newlyweds game rip-off, “Know Your Boo” was hilarious, if only because I had no idea Donna and Jerry knew so much about each other. The best part was that it highlighted how little Andy and April know about each other. April hurt Andy’s feelings when she didn’t name Mouse Rat as her favourite band, and ended up going to Ann for advice on how to smooth things over.

Meanwhile, Ron was interviewed by a little girl on a field trip who had to write a report on why government matters. Ron demonstrated taxes to her by eating most of her lunch, had turned her into a Libertarian by the end of the conversation, and gave her a parting gift of a landmine. When the little girl submitted an essay that simply said “It doesn’t”, her mom was not impressed. The last scene, where Ron basically told the girl to play along until she was 18 and could become a Libertarian, was hilarious – especially when he asked her to autograph the essay for him.

The episode was so, so well done – but at this point, that’s really not a surprise. Parks and Recreation has been on such a roll this season, it is easily one of the best shows on television right now, comedy or drama. Now, check out my favourite quotes, and tell me what you thought of the episode!

Parks and Recreation: Love is in the Air
https://haligonia.ca/parks-and-recreation-love-is-in-the-air-37793/