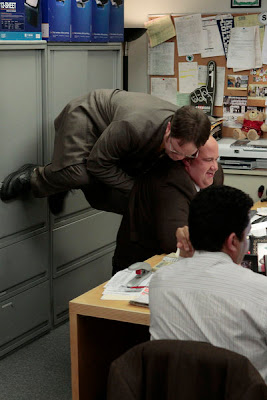 If I were just to base things on last night’s episode of The Office, I’d say things are going to be just fine without Steve Carell – and for that matter, without any fancy guest stars either. Now, that said, I do think it’s a fun idea to have lots of comedic actors make cameos as job candidates. I think that will be funny. But last night’s episode was hilarious, and that was all thanks to the regular cast.

Dwight was made acting manager of the office until they could find a replacement for Deangelo for one reason – Jim turned it down. Poor Jim. He didn’t want to take the job because things were going smoothly without a boss, plus I believe we already learned that, based on Sabre’s commission system, he can make more dough as a salesman.

Dwight, of course, immediately did a bunch of crazy things. Too many things to even mention, but I’ll name a few: Placing a portrait of himself in the office, installing an ancient time card system, leading the pledge of allegiance every morning, staggered lunch breaks (Jim’s was at 10:30 a.m.) and blocking every fun website ever, including Web MD.

Of course, everyone was miserable and plotted ways to sabotage Dwight during his upcoming visit with Jo. But then there was an incident – Dwight decided it would be cool to wear a holster WITH A GUN IN IT around the office, and he accidentally shot it. Right next to Andy.

The best part of this was Dwight’s intense desperation to hide the incident from Jo. You might have expected him to act like it was no big deal, but you could tell he knew he’d blown his chance. So people blackmailed him. Pam made him get rid of all his weapons. Kevin made him give him a really gross back massage. Jim made him promise to use the phrase “shagadelic, baby” at least three times in conversation with Jo, and do jazz hands every time Jim coughed. That one was my favourite.

Eventually, Dwight just ‘fessed up to Jo so he could get out of the blackmail, and she took his job away. Obviously.  Personally, I’m glad Dwight’s reign of terror only lasted one episode – they made a lot of good jokes, but I don’t know how long it would have been funny for. It would be hard for Jim to mess with Dwight if Dwight was actually the boss.

So now Jim, Toby and Gabe have been named the search committee and will have to find a new boss. And in the meantime? The employee with the most seniority has taken over: Creed. That should be fun.

The episode was filled with lots of extra, fun jokes. Andy played the overdramatic victim very well, after Dwight shot the gun right by him. He burst an ear drum, and after he kept referring to himself as a “Gunshot victim,” Darrell started mouthing things to him so he’d think he’d gone deaf. Andy was also involved in an awkward encounter with Gabe, who begged him to stay away from Erin. I’m about ready for Gabe to move on from this, but it was funny to see Andy stumble over whether he’d promised Gabe he’d never date Erin again: “That’s between me and my diary.”

What did you think of the episode? Can the show hold its own without Steve Carell? Now, check out my favourite quotes and moments:

The Office: It Ain’t Dwight
https://haligonia.ca/the-office-it-aint-dwight-37796/