For some reason (perhaps hell freezing over), it’s actually not bad to be a “cinephile” in HRM right now. The film festival is over, Empire Theatres still gleefully possesses a monopoly… but something is different. There are now three, count ’em, three different “movie nights” (that I’m aware of) routinely bringing to the big screen well-loved classics and new features.

The oldest and most well-known of the movie-night lot is Monday Night Movies, brought to us by AFCOOP. Y’all know AFCOOP… they put on great workshops, run the Film 5 program, give scholarships, rent equipment, and are generally great. Monday Night Movies brings feature films, documentaries, and shorts to Halifax that would otherwise never make it past Montreal. Past films they’ve screened include Inland Empire, Primer, Coffee and Cigarettes, Saddest Music in the World, City of God, Bubba Ho-Tep, and last night’s amazing film, Man on Wire. Admission is $10. A season pass is $60. Movies are shown on Mondays, obviously, at Park Lane. It’s usually a good idea to stake out a seat early… this is a popular event.

Next on the docket is the very new Empire After Dark series. This is being put on by Empire Park Lane in Halifax, and will feature classic films, as voted by a Facebook group, shown at midnight. Just before Halloween they screened a double-feature of Beetlejuice and The Shining. I skipped the first part of the evening, but really enjoyed seeing The Shining at midnight. Prizes donated by the movie theatre were given out before the movie, and admission was cheap, only $7. There wasn’t a big crowd at this event, and I didn’t go to see last week’s showing of Resevoir Dogs, so I can’t really gauge how popular it is yet. Movies have been shown, so far, on Friday nights, so it’s okay to stay up late, kids. 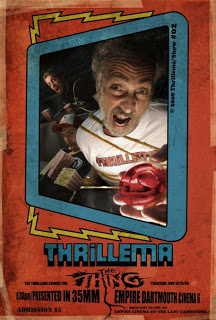 Last but not least is probably the most interesting of the bunch, in terms of delivery. Halifax Dartmouth filmmaker, Jason Eisener (of “Hobo With a Shotgun”, “Teeth Beneath”, and “Treevenge” fame), along with a group of film-lovers that includes journalists from The Coast and The Chronicle Herald, have started a movie-night called The Thrillema (thriller+cinema… I think). The Thrillema is presented at Dartmouth Empire 6, which I believe is closing next year. For $5 (!!!), you’re treated to a lot of fun. The crowd (and I do mean a crowd) that goes out to this event has, so far, been amazing. Screenings have thus far been on Thursdays.

Before the film, trivia is presented on the movie, with lots of prizes to be won. A draw follows that… I believe the sponsors have been places like Last Game Store, Strange Adventures, and Pro Skate. Before the movie, there is an amazing film reel that plays, which includes old theatre ads and retro trailers for classics such as Werewolves on Wheels, The Devil’s Rain, Star Crash, and Robocop. The two films that have been screened so far are Friday the 13th and The Thing. A Clockwork Orange will be screened on December 4th. Suggestions on the Facebook page include Braindead, The Toxic Avenger, Two Thousand Maniacs!, Eraserhead, Troll 2, and The ‘Burbs. I hope they at least make it to Troll 2. Or The Gate 2…

So there you go, plenty of choices. You’re covered for Mondays, Thursdays, and Fridays. If any chance of having a social life presents itself, you can always turn to Video Difference, Blockbuster, the interweb, or dust off your copy of The Conversations: Walter Murch and the Art of Editing Film. It’s going to be ok.