When I go on vacation, large chunks of my trips are planned around finding great food in the places I visit. For me nothing says more about a culture than the cuisine and favourite social haunts of the locals. I definitely spend time researching my trips to find the best of any one food experience I might be looking for, but no more than the average person spends trying to find a good hotel, some interesting attractions or good shopping. Not so with these authors, many of whom are food professionals. They’ve devoted time and energy to finding the best of the best in their travels, or more to the point, they’ve traveled to find the best of the best.
A Cook’s Tour: in search of the perfect meal (M)
by Anthony Bourdain.
You can be sure it will be irreverent, but it will also be delicious. Celebrity chef and host of TV’s No Reservations, Bourdain’s adventures and misadventures will take you around the world sampling the delicious and the dangerous all for the sake of the perfect meal. 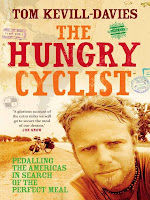 The Hungry Cyclist: pedaling the Americas in search of the perfect meal (M)
by Tom Kevill–Davies.
This guy is biking, so at least you feel like he’s working up an appetite, and please note, that title isn’t America it’s Americas. North and South, over 100 000 miles, UK cyclist Davies investigates the landscape and the cuisine, looking for—and finding—adventure and great food.
Pint-sized Ireland: in search of the perfect Guinness (M)
by Evan McHugh.

This guy’s not even eating, he’s just traveling and drinking beer. Although to be fair, it’s a hearty beer and one which reputedly contains a lot of vitamin B. The best part: this Australian food writer doesn’t even really like Guinness!
The Year of Eating Dangerously: a global adventure in search of culinary extremes (M)
by Tom Parker Bowles.

The subtitle pretty much gives the focus, the book jacket expands that and tells us that the English author who was “intrigued by the food phobias of two friends … became inspired to examine the cultural divides that make some foods verboten or “dangerous” in the culture he grew up with while being seen as lip-smacking delicacies in others.” Oh, and if it interests you, the author is that Parker Bowles: he’s Camilla’s son.
The Man Who Ate the World: in search of the perfect dinner (M)
by Jay Rayner.

Although the concept of the book sounds similar to Bourdain’s above, UK food critic Rayner’s book travels in an entirely different direction. Rayner’s quest—to investigate when haute cuisine became its own brand—is accomplished by eating at fancy restaurants in some of the world’s great culinary cities. On the surface this may sound like an overly self-indulgent book but it has a lot of thought provoking comments on globalization and excess. That, coupled with Rayner’s characteristic sarcasm and wit, make it a great read.
American Pie : my search for the perfect pizza (M)
by Peter Reinhart. 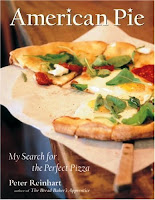 This one is more of a cookbook than the others in the post, but if you’re interested in food adventures, I’m thinking you might also be interested in cooking. Reinhart is described as a master bread maker, so it’s not surprising he’d have an interest in perfecting pizza dough. The book is divided into two parts: The Hunt and The Recipes. The Hunt is the travelogue, taking the author to cities in Italy and the US which are famous for pizza, The Recipes is, well, the recipes!

Save the Deli : in search of perfect pastrami, crusty rye and the heart of Jewish delicatessen (M)
by David Sax.

Deli lovers unite, this one is for you. From the amazon.com description “As a journalist and life-long deli obsessive, David Sax was understandably alarmed by the state of Jewish delicatessen–a cuisine that once sat at the very center of Jewish life had become endangered by assimilation, homogenization, and health food trends. He watched one beloved deli after another shut down, one institution after another shutter only to be reopened as some bland chain-restaurant laying claim to the very culture it just paved over. And so David set out on a journey across the United States and around the world in search of authentic delicatessen.”