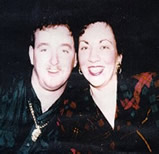 Today will mark the 20th anniversary of the murders of Gail Stone and Richard Marriott and the Special Investigation Section of the Integrated Criminal Investigation Division continues to investigate the case.

On November 20, 1998 at 9:41 p.m., police responded to a report of a double shooting at 15 Parkmoor Avenue in Halifax, the residence of Gail Marie Stone and Richard Joseph Marriot. Upon arrival, officers located Gail inside the home suffering from gunshot wounds. She was transported to hospital and succumbed to her injuries four days later.

Richard was found deceased inside the home as a result of gunshot wounds. He was last seen at approximately 9:15 p.m. the same day driving a maroon-colored 1996 Dodge Caravan on Dutch Village Road. It is believed he arrived home at approximately 9:30 p.m.

Investigators are continuing to pursue ways to advance the investigation. They believe there are people who have information about this case and they want them to assure them that it’s never too late to come forward with what they know.  Anyone with information about Gail’s and Richard’s murders is asked to contact the Halifax Regional Police/RCMP Integrated Major Crime Unit at (902) 490-5333.Anonymous tips can be sent to Crime Stoppers by calling toll-free 1-800-222-TIPS (8477), submitting a secure web tip at www.crimestoppers.ns.ca or texting a tip – Tip 202 + your message to 274637.