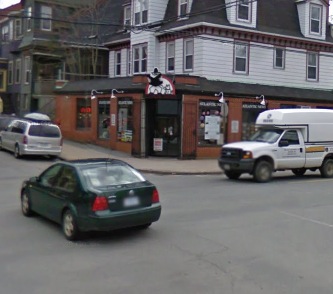 From HRPD:
Halifax Regional Police is warning citizens to be careful after an
assault early Sunday morning.


View Larger Map
The incident occurred at approximately 4 a.m. Sunday morning. The
20-year-old female victim and her friend were walking home when they
were approached by the suspect in the area of Queen and Morris Streets.
The suspect reached under the victim’s skirt and touched her. When the
victim confronted the suspect he produced a small pipe-like object and
threatened both women. The suspect was scared off when an unknown man
approached from the area of Morris Street.

The suspect is described as a white male, approximately 26-years-old,
with a round face, short scruffy hair, 170 lbs. and an athletic build.
At the time of the incident he was wearing a black stocking or toque
style hat, blue jeans and a black fall jacket.

Halifax Regional Police urges citizens to be careful when walking after
dark. Try not to travel alone and stick to well lit streets. Be aware of
your surroundings and the people around you. If you think you are being
followed, go into the nearest open business and call police.

Investigators are interested in speaking with the male pedestrian who
scared off the suspect or with anyone with information about this
incident, and ask them to contact Halifax Regional Police at 490-5016.
Information can also be provided anonymously through Crime Stoppers at
1-800-222-TIPS (8477) or online at www.crimestoppers.ns.ca.