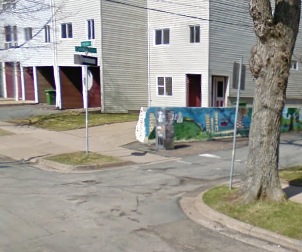 From HRPD:
Halifax Regional Police is investigating an incident involving an air pistol which occurred early this morning in Halifax.


View Larger Map
A 23-year-old man was walking in the area of Duncan Street and Chebucto Lane at 2 a.m. when a vehicle pulled up to him. A woman sitting in the front passenger seat pulled out a clear air pistol, aimed it at the victim and attempted to shoot. The gun did not fire and the victim started to walk away. The vehicle pulled alongside him and the woman again aimed at the man, hitting him in the head. The victim was not injured and attempted to flee the area but was cut off by the vehicle, forcing him to jump onto the trunk of the car. The car started to pull away and the victim jumped off the trunk at which time two men exited the vehicle and began chasing him.

He was able to get to safety and call police who are now looking for a newer model light blue Hyundai Tiberon with a spoiler on the back and that may have some damage on the trunk. The woman is described as white, 19-23 years-old, 5’5″, 110 lbs. with light brown or blonde hair. The two men are both described as black, fair complected and 19-25 years-old. One of the men is approximately 6′ tall with a medium build and a crew cut. The second man is 5’7″ with a slim build and braided hair.

Anyone with information in relation to this incident is asked to call police at 490-5016. Information can also be reported anonymously to Crime Stoppers at 1-800-222-TIPS (8477) or online at www.crimestoppers.ns.ca.