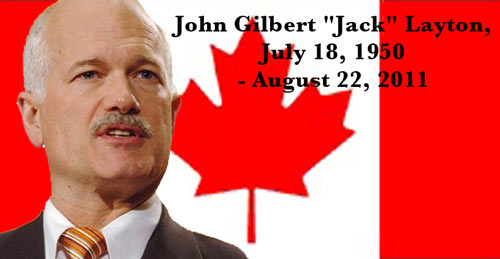 Release:
Premier Darrell Dexter, today, Aug. 22, issued the following statement after the death of Jack Layton, federal leader of the opposition.
"I want to start by sending my condolences to the family of Jack Layton. I know how deeply Jack cared for his family. I know how devastated they must be this morning.
Today is a sad day for Jack's family and friends. It is a sad day for New Democrats. And it is a sad day for Canada.
Today Canadians lost a man with the rare ability to both lead and unite our country – a man with an infectious enthusiasm and a fighting spirit that so many of us came to admire and love.
It is so difficult to have this tragic day arrive so soon after Jack's tremendous success in the federal election. It is left now to others to honour Jack by taking up the great opportunity he left this country.
Nova Scotians, like all Canadians, are grateful for all that Jack Layton accomplished by being a progressive voice on so many important issues.
We will Miss Jack.
On a personal note, I've known Jack for a long time. He was a friend, a mentor and at the heart of it all, a great Canadian.
Jack and I spoke during difficult times, we spoke during some of the great moments in our lives.
No matter the circumstances, I could always count on my good friend Jack Layton.
I will miss him."
Mr. Layton, raised in Hudson, Que., rose to prominence in Toronto municipal politics and he was elected head of the federal NDP on the first ballot in 2003. In this year's election, the NDP won a record 103 seats and formed the Official Opposition.