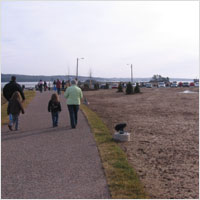 Bedford residents enjoy a stroll on the new Bedford Harbourwalk during its official opening back in November 2009.

A public meeting will take place on Wednesday, June 16 at 7 p.m. in the Basinview Drive School cafeteria.

The designs were presented by Rob LeBlanc, a planner with Ekistics. LeBlanc explained how some of the inspiration for the designs came from a public workshop that took place in April 2009.

As stated at halifax.ca/visionhrm/bedfordwaterfront, on June 16 Ekistics “will present the draft plan, followed by an opportunity for public questions and comments. The plan culminates from the ideas provided to date to a steering committee, composed of community representatives and property owners within the study area.”