[No stranger to this blog, you may recall her previous guest post Racquel does fashion. Now she looks back at her cultural heritage in this week’s special feature on East Coast roots.]

By Áine (aka “Racquel Valencia”) 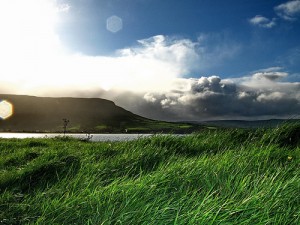 At one point, my home province of Prince Edward Island was going to be called “New Ireland” thanks to its high proportion of Irish immigrants. One has only to look at some of our town names (Belfast, O’Leary, Irishtown, Emerald, Kelly’s Cross) to feel the shamrocks and shillelaghs. Loads of the kids I went to school with had names that ended in Mc or O. First names like Brian, Erin, Kelly and Ryan were a dime a dozen. Saint Patrick’s Day was dangerous for the amount of drunk people that would stagger out of the Olde Dublin Pub or the Harp and Thistle.

And then there was my family.

My father, originally from Northern Ireland (cue the uncomfortable looks) had immigrated to Massachusetts with his family as a young man, yet somehow ended up on the mini Emerald Isle. Never one to eschew cultural pride, my siblings and I were all given almost unpronouncable Irish Gaelic names (my mother’s German-American heritage didn’t have the same weight, apparently). Easy as it was to be Irish on PEI, having a name that looked like Annie spelled wrong was not. It took a lot of years of furrowed brows, bad nicknames and “Miss O’Hare?”s to really settle into my name.

Some of my cousins haven’t fared much better; there’s a Fergus, an Aoife (pronounced “ee-fah”), an Eimear (”ee-mer”) and a Fionnoula (”finn-ula”). For them it’s easier, though; they live in the land in which these names originated, whereas I’ve been battling it out with Sarahs and Emilys for as long as I can remember.

I’ve done a bit of traveling in my 24 years, and my strange name almost always baffles people, regardless of cultural heritage. The only people who tend to get it right on the first time are from Ireland, and even then the pronunciations range from Enya to Onya to Anya (FYI my immediate family has always used the latter). Once I came to terms with my odd name, I embraced more of my freshly dug roots; I have two tattoos in Irish Gaelic, relish the divinity that is the potato (although that could be the PEIslander in me talking) and hold superstitions as dear to my heart as religion.

I’m going to hell for that last crack.

Like the Maritimes, Ireland is a land steeped in tradition, yet determined to move beyond its stereotypes. Just as every Atlantic Canadian is not drawing pogey, nor is every Irish person an alcoholic. Nor are they Catholic. Or red-haired. Or a leprechaun. The times that I have been to Ireland to visit family, I’ve been impressed at how well they marry their past and future; you might see a Thai restaurant sharing rental space with an off-liscense, for instance. And as much time as I spend hating on bands and artists that I consider “has-beens”, there really is something to be said for knowing where you’re from… and where you’re going.

Racquel Valencia is the nom de plume of a North End chick. Visit her at Smell the Glove.