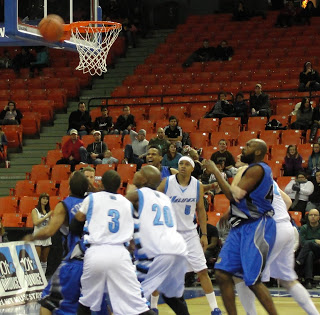 The Halifax Rainmen made a statement Sunday afternoon by giving the undefeated Rochester Razorsharks their first defeat of the season.  Halifax put together one of the team’s best performances against the defending champs and held off the pesky Razorsharks 102-99.  It was a truly physical matchup between the two teams, so much so, that both teams got a little chippy before halftime.

The first half was all Rainmen as everything was just clicking for Halifax.  The Rainmen went on a roll, going on a 10-0 run midway through the second quarter to help build a 17-point lead.  By halftime, the Rainmen were up 52-39.

In the second half, the Razorsharks, as expected, didn’t lay down and made a run with guys like Lincoln Smith and Jerice Crouch leading the way.  Rochester continued to chip away at the Rainmen lead when Randy Gill (a Halifax fan favourite…..sarcasm) made a three ball with 3:42 to play in the fourth to tie the game at 90.  But the Rainmen showed composure and closed out the game.  A big three from Ferguson, a Crookshank dunk along with some clutch free throws from Gary Ervin helped seal the win.  In the closing seconds, with the Rainmen up three, the Razorsharks had an opportunity to send the game to overtime but Jerice Crouch’s three bounced off of the rim.

Desmond Ferguson led the Rainmen with 26 points and Eric Crookshank looked good in his return after missing the last game in Puerto Rico.  Crook had 21 points and worked the glass grabbing 14 rebounds.

For the Razorsharks, Lincoln Smith led the team with 18 pts and last season’s MVP, Keith Friel finished with 12 points.  Former Rainmen, Glen Dandridge and David Bailey were in uniform for Rochester, Dandridge had 12 pts while Bailey had 6 pts and 5 boards.

Hat-tip to the Razorsharks
Lincoln Smith 18 pts (8 of 10 from the field), 5 rebounds

“Cam Stanley’s a left-handed wing that made the Dakota Wizards after showing up and playing well in an open-tryout in Washington, D.C. He probably would’ve made the Wizards, but was released because the Wizards had Romel Beck (the Mexican National Team’s leading scorer) and Renaldo Major (former D-League defensive player of the year and D-League call-up) at his position. While he was in camp, he showed athleticism, a good basketball IQ and turned out he could defend pretty well. He also did a good job of getting to the hoop, but his jump shot mechanics looked a bit shaky.

Prior to the Wizards, I don’t honestly know enough about him. He played three seasons at Wake Forest before transferring to Winthrop for his senior season.”

Be sure to check out Scott’s blog, Ridiculous Upside for all your NBA D-League news/updates.

Halifax has a favourable schedule in the month of February with three straight games against teams with losing records (Buffalo, Manchester and Maryland) before facing off against Puerto Rico on the 26th.  What’s you prediction for the next three?  3-0? 2-1? Let us know your thoughts…