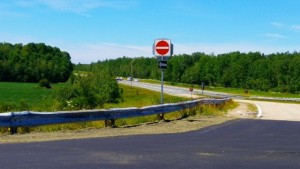 An RCMP vehicle was involved in a two-vehicle collision earlier today.

Just before 9:30 a.m., an RCMP officer performing traffic duties in a fully marked RCMP car on Highway 101 near Exit 19. He was involved in a collision with a civilian vehicle and was struck on the driver’s side of his car.

The two occupants of the civilian vehicle sustained minor injuries and were transported by EHS to hospital. The officer also required medical treatment for minor injuries.

An RCMP Traffic Analyst has been called to the scene to conduct an investigation. Highway 101 will be closed to traffic between Exits 19 and 20 for several hours. Traffic is being diverted along Highway 1.