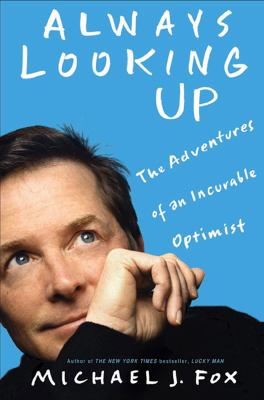 To garble Shakespeare: some people have greatness thrust upon them and some people have the courage to make great things out of terrible situations. Michael J. Fox falls into this category. Known to us as star of the television shows Family Ties and Spin City and the Back to the Future movies, Canadian Fox was diagnosed in 1991, at a young age, with Parkinsons. He kept his condition private until 1998. Since then, in addition to acting projects, Fox has been a spokesperson and advocate for Parkinson’s Research.

The many holds on his new book, Always Looking Up: The Adventures of an Incurable Optimist is evidence that he inspires us with his cheerful and optimistic approach to life.

While you are waiting for your turn to read this memoir, you might enjoy these other uplifting stories.

A Life Shaken: My Encounter With Parkinson’s Disease by Joel Havemann. Perhaps a little heavier on the medical side of this condition, Havemann, nevertheless provides an excellent patient’s perspective.

Nothing is Impossible: Reflections On a New Life by Christopher Reeve. Reeve, a quadriplegic due to an injury, inspired able-bodied people to live life fearlessly and to take risks.

Thinking In Pictures: And Other Reports From My Life With Autism by Temple Grandin. An interesting book about autism, a condition so much in the news presently, from the perspective of an autistic person who has managed to live and work successfully. Here she describes an autistic person’s thought processes, so different from the average individual.

The Curious Incident Of the Dog in the Night-time by Mark Haddon. Christopher, an autistic boy, discovers a dead dog and decides to track down its killer. Interestingly, his thought processes mirror Temple Grandin’s description of how an autistic person thinks.

My Left Foot, by Christy Brown. A classic. Brown was born in the 1930’s in Ireland with cerebral palsy. He was fortunate to be born into a family who included him in their activities and cared for his intellectual growth. His autobiography was made into a film of the same name.

Readalikes - Always Looking Up: The Adventures of an Incurable Optimist by Michael J. Fox
https://haligonia.ca/readalikes-always-looking-up-the-adventures-of-an-incurable-optimist-by-michael-j-fox-1942/