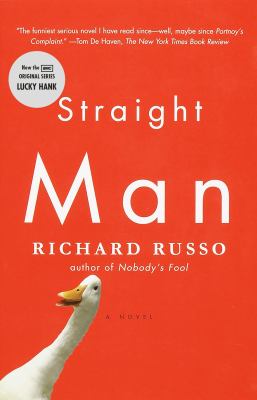 Someone recently asked me to suggest a good weekend read and I couldn’t help but think of Straight Man by Richard Russo. I read it a few years back after finding it listed in a magazine somewhere on an anti-Oprah list. (An explanation: the list compiler was tired of the heart-wrenching books that Oprah was fond of recommending at the time and wanted something that still told a good story but that wasn’t totally depressing). Straight Man really fits that bill.

The plot revolves around William Henry (Hank) Deveraux, Jr. who is a professor in the English Department at a small town university. Ever living in the shadow of his famous and academically successful father (William Henry Deveraux, Sr.) Hank is having something of a life crisis. He has been give the position as Interim Chair in the English Department at the university, but he’s making a bit of a mess of things; his daughter’s marriage problems are starting to be his problems too and on top of that, his father has just rolled back into town after an absence of decades.

A lot happens in this book. A lot of really funny stuff happens in this book. I don’t want to chronicle events here, because I don’t want you to miss the chance to laugh out loud when you stumble upon them throughout the narrative. But I don’t want you to think this book is just fluffy comedy, because there is a real human story there as well. Henry’s problems, and his solutions, are sometimes outlandish, but you can always relate to where is coming from – even if you would handle things in a totally different way.

Richard Russo has since gone on to win a Pulitzer Prize for his novel Empire Falls – which, like Straight Man, follows a few main characters in their lives in small town America. Empire Falls is more serious – although there are touches of humour, and I actually enjoyed Straight Man a whole lot more.

For more fictional send-ups of the academic milieu you might also enjoy:

Moo by Jane Smiley – about the people of Moo University, a midwest Agricultural College

Small World by David Lodge – also set in an English Department, where the academics are competing for a newly created chair position