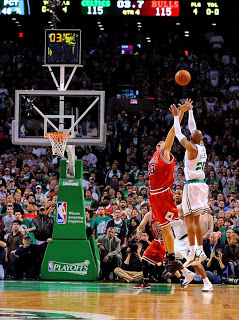 Some basketball pundits are calling it the greatest NBA playoff series in the associations 50 year history. For 7 thrilling games, the Boston Celtics and Chicago Bulls went shot for shot, stop for stop, more often than not, well past regulation time.
How often?
There were 7 overtimes, a record for any best of 7 playoff series. The 2 teams went to overtime in game 1 and game 5, and double overtime in game 4. In game 6 they went to triple overtime , a certified masterpiece that was the most highly watched first round playoff game in cable television history, and easily the greatest game played in Chicago since the days of Michael Jordan. Game 7 in Boston may be looked upon as anti climatic as the Celtics pulled away late and won by 10 points, but in its entirety, this series will be talked about by basketball enthusiasts for a long time.
Why exactly?
For starters, the teams are two of the leagues most notable franchises. The Boston Celtics are the NBA champs from last season, out muscling Kobe Bryantès Lakers for the franchises 17th title in its illustrious history . On the rafters in Boston, hang the numbers of Larry Bird, Bob Cousy, and Bill Russell.
The Chicago Bulls wear the same red, black, and white uniforms once worn by Michael Jordan and Scottie Pippen, who led the franchise to 6 NBA titles in the nineties, revolutionizing the way the game is played in the process.
It also helps that the 2 teams are from Boston and Chicago, 2 of the biggest sports markets in the United States.
But beyond all of that, it was the way these two teams battled each other night in and night out, the heroic performances by so many players, and the contrasting physical makeup of the teams, that I will look back upon fondly.
On one side, the green and white of the Boston Celtics, led by two of the toughest all stars in the NBA, willing their team of misfits and outcasts to another playoff victory. On the other end, a team of athletic and cocky soon to bes, who seemed to jump so much higher, and run so much faster than thier seasoned and crafty counterparts, but simply could not deliver a knock out blow to a proud group of champions.

Ray Allen, the tough as nails gunner, scored 51 points in game 6. More importantly, he seemingly hit about 10 three point shots that either sent the game to overtime, or won the game for the Celtics. Paul Pierce was his warrior self, Derrick Rose showed flashes of brilliance, giving us a taste of whats to come. Ill remember Ben Gordon, valiantly trying to match Allen, his fellow UCONN alum, before crashing in the second half of game 7.
Who will forget Brad Miller’s three point shot and layup at the end of regulation in game 6 to bring the Bulls back from the cusp of elimination? Who will forget Yannicks kid, Joakim Noah, all legs and arms with pony tail flailing about, stealing Paul Pierces errant pass and going in for an AND1 dunk, giving the Bulls a game 6 win, sending the series back to Boston? Who will forget Rajon Rondo and Kirk Hinrich, nearly coming to blows after the two got tangled up and mid court? The names Scalibrane, Big Baby, and Eddie House are now etched in our brains, thanks to the play of three guys, who remind us that you don’t have to look like an Nba player to be one.
It was a first round series for the ages, and I think all basketball fans wish it had never ended . But fear not, Kobe vs Lebron is lurking in the near future, and may give us one more chance to jump off our couch, yell, and clap out loud.

Remembering the Bulls and Celtics
https://haligonia.ca/remembering-the-bulls-and-celtics-1966/