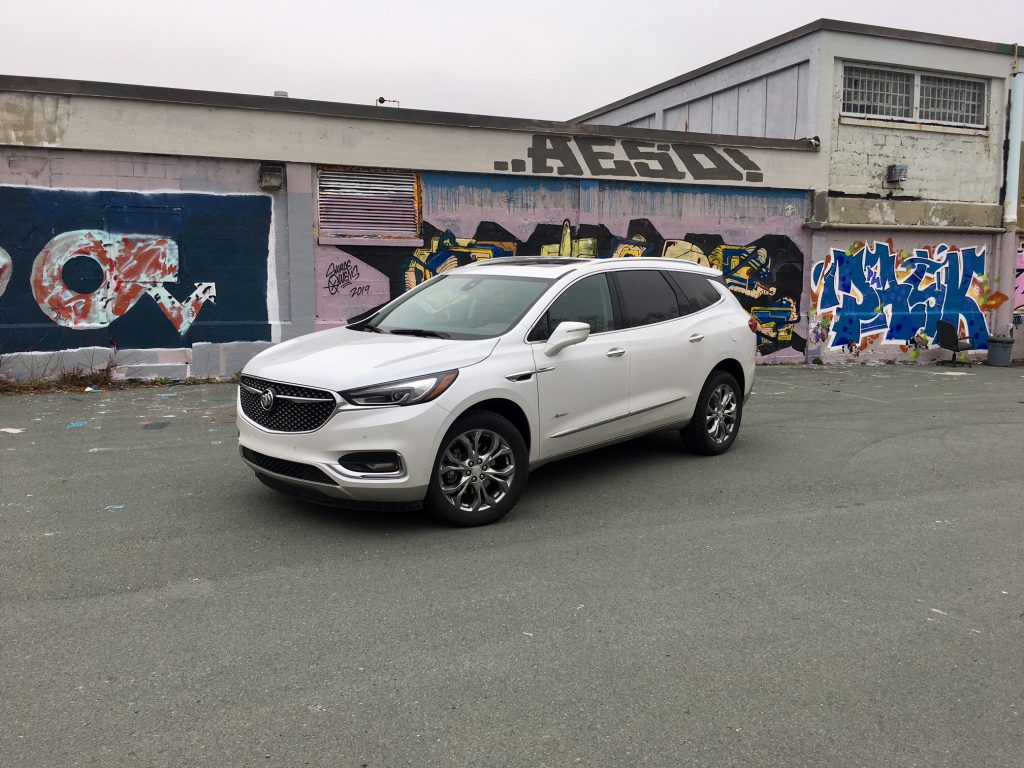 Despite the fact that I’ve been driven hundreds of vehicles and logged thousands of kilometers behind the wheel, it’s always a bit shocking when I come across a vehicle that I’ve never driven before.

Such is true with the Buick Enclave. The Enclave has been around since 2008 and was been a key player in helping the Buick nameplate stay alive when General Motors axed Pontiac, Hummer, Saab and Saturn from its portfolio. Strange that I hadn’t gotten any seat time in one.

Even stranger, in all that time, Buick really didn’t give the Enclave much attention. Sure, it got a styling refresh in 2013, but it wasn’t until last year when GM finally came around to giving the Enclave a significant overhaul and subsequently a second generation.

And even though there’s only two generations, it’s safe to say this one is the best looking by far. Gone are the bulbous lines of the past in favour of a sleeker look – one that could almost be described as handsome, especially out front. My tester was the top tier Avenir trim – something Buick is hoping will take off as a bit of a sub-brand.  Think of it as the Denali of GMC. But with Avenir comes some styling enhancements such as a black-ice finished grille with a chrome wing, LED accent lighting surrounding the front turn signals, and unique 20-inch pearl nickel finished wheels. The wheels are the only sore spot in my opinion. Not only can you get 20-inch rims in other trim levels, but the wheel style doesn’t stand out as being particularly interesting or posh. If I’m going to shell out the extra dough for the fanciest trim, it should look the part a bit better. The rear is finished with nice looking LED tail lights and splashes of chrome. There’s also Avenir badging.

The interior is much more impressive as Avenir brings with it supple and rich Chestnut leather along with contrasting colours and wood-trim accents. The design itself is classy and modern – lots of interesting swooping lines. It’s a very nice place to be and borders on Cadillac levels of luxury. Materials are high quality and most are soft-touch. Except for the turn signal stalk which feels like it might snap off after eventually.

The front and middle row bucket chairs are quite comfy with the third row being adequate and best left to smaller stature individuals or children. If family hauling is the name of your game, bite the bullet and get a minivan. However, versatility is not a problem in the Enclave with power folding ability for both rows of seating and a resulting 2,764 L of cargo room with all seats down. It is positively cavernous, as you’d expect from such a large luxury barge. However even though the seats can be power folded, it only really works if the second row seats are not set all the way back. If they are, the third row will hit them.

The Enclave Avenir is powered by a 3.6 litre V6 which is good for 310 horsepower and 266 pound foot torque mated to a 9-speed automatic transmission. Considering how much this porker weighs, that might not seem like adequate power on paper, but I can assure you it is. The Enclave is eager to get moving from a stop quite briskly. It emits a decent growl to boot. The engine and transmission seem to get along decently, though I’m sure the Enclave could do just as well with an eight-speed because getting to nine was always a challenge during my time with it.

When stopped the Enclave automatically cuts the engine to reduce idling and save you a bit of change of the pumps. This system cannot be turned off. Normally that sort of omission would irritate me, but I am a firm believer in doing everything possible to try to reduce our emissions. Plus, saving money is always good and even better, the system works fairly seamlessly. When you take your foot of the brake, you barely hear or feel the engine re-engage.

When it comes to performance, you might expect that, being a Buick and being the biggest Buick currently offered, performance may not be a forte of the Avenir. And you’d be right. Except you’d be sort of wrong. While the Enclave is no track star, it still surprises with some performance credentials here and there.  The all-wheel drive system is actually a twin-clutch set up with torque vectoring. That means the system can automatically brake a wheel to help mitigate G-forces and weight to guide the vehicle out of a corner a lot better. This is a system that engages when you turn on the all-wheel drive system. Yes, you need to hit a button to turn on the all-wheel drive system, it doesn’t happen automatically like in a lot of Haldex systems. This is advantageous for moments when you don’t need all-wheel drive (which is about 80% outside of the winter season), and helps to save you gas.

In addition to torque vectoring, the Avenir model adds on variable dampers. This allows for the ability to soften of stiffen the dampers making for a surprisingly agile ride when in sport mode. I’m going to stop short of calling the Enclave fun to drive, but it’s certainly more engaging than you might expect.

On the highway, the Enclave becomes more characteristically Buick by offering one of the quietest cabins in the segment. The engine is happy enough to whisper as it goes along and the transmission does its best to stay out of that way too. That makes the Enclave an all-star luxury cruiser perfect for long road trips. It soaks up bumps and other imperfections in the road with ease. And if you’ve driven on Nova Scotia’s highways lately, you’ll know there are certain sections where avoiding potholes is nearly impossible. But in the Enclave they can barely be felt (for the record, I still made every effort to avoid them).

The official fuel consumption numbers come in at 13.8 L/100 kms city and 9.5 highway After some mixed driving that skewed more towards city driving, I was able to return 13.5 L/100 kms. That’s not too bad considering the size of this beast.

And considering this is my very first time behind the wheel of an Enclave, my first impressions are certainly favourable. It delivers in terms of space, quietness and luxury – all things you’d expect from a Buick. But it surprises (pleasantly) with performance and relative fuel efficiency to boot. The price at the Avenir trim is a bit of a tough pill to swallow, but of all the GM vehicles that ride on this platform, this one is easily the best of the three.