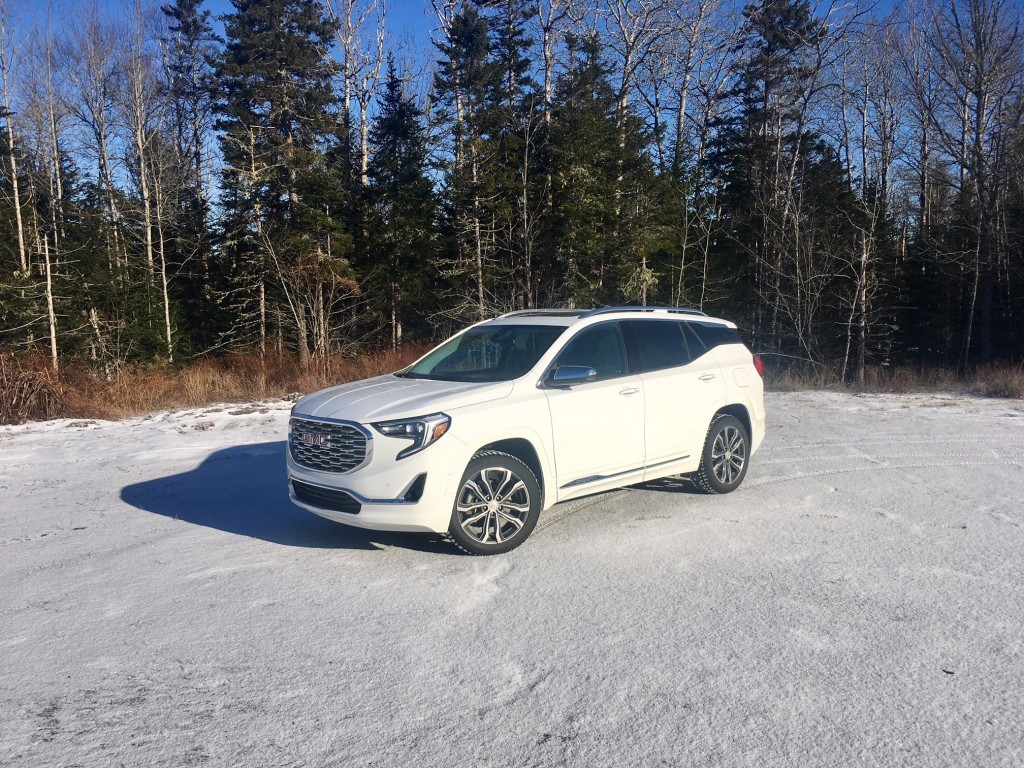 You may have heard that the domestic auto manufacturers have recently decided to put many of their chips into one basket. Crossovers and SUVs are the money maker these days and manufacturers such as Ford and GM are betting the appetite for traditional passenger cars will bite the dust quicker than the Lincoln Blackwood. As an FYI, if you’ve never even heard of the Blackwood, no one could blame you. 2002 was the first, last and only year it sold in America, AKA truck country.

So it isn’t particularly surprising that GM saw fit to invest in and rejig its SUV lineup. For the Terrain, the smallest offering wearing the GMC badge, that meant making it smaller and more car-like.

That’s right, when it comes to the Terrain, GM is getting rid of actual passenger cars in favour of an SUV that drives like a passenger car. Which is a bit like asking for your chicken vindaloo to be made extra mild. What’s even the point? 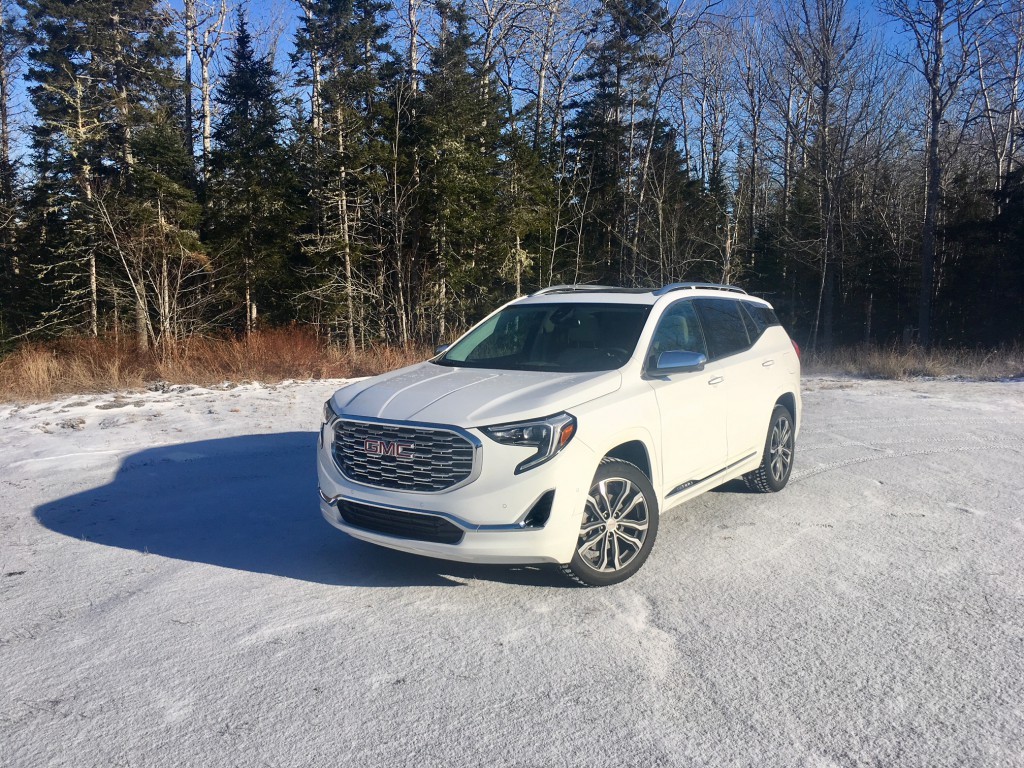 Before we dive deeper into that head scratcher, let’s address the exterior styling because that is something most can agree GM got right. The new look is sleeker and more modernized. As mentioned, it is smaller than the outgoing model and with a loss of three inches in length and nearly six inches in wheelbase, it certainly looks it compared to the old model. But to my eye, that helps streamline the look. 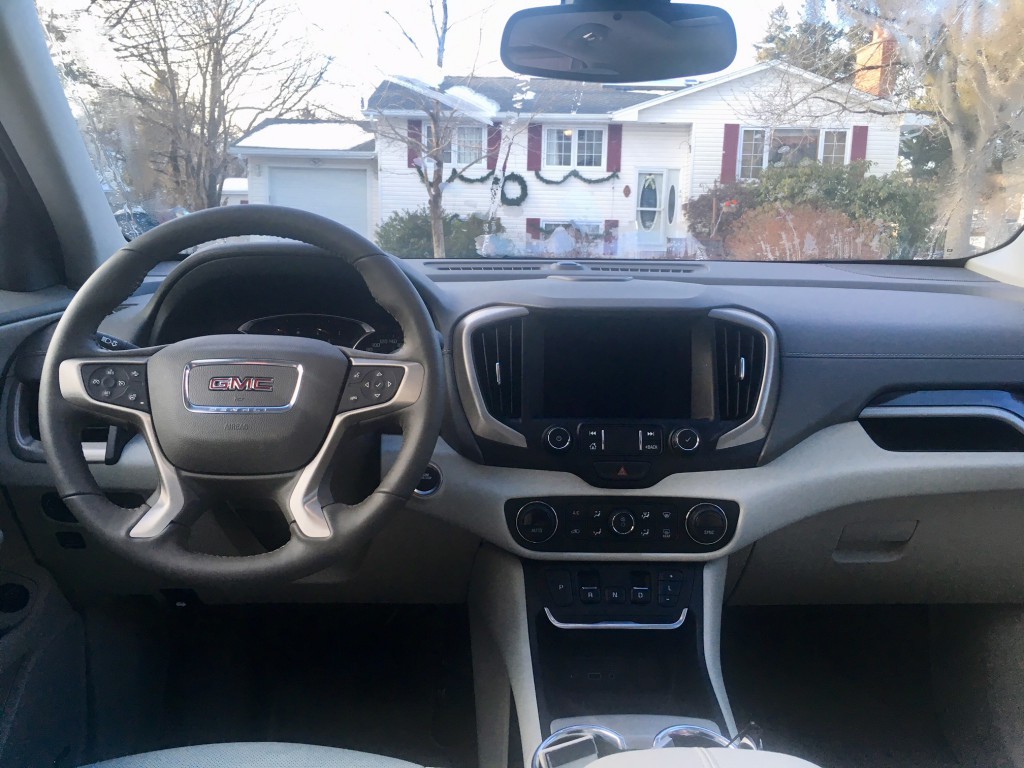 Gone are the chunky edges and squared off fenders in favour of more curves and creases. The large C-shaped LED daytime running lights wrapped around LED headlights (only available on Denali trim) help the Terrain to look a bit more premium as does the chrome mesh grille (also exclusive to Denali). It has a lower and longer hood, redesigned wheels and has LED tail lights which mimic the headlights. Unfortunately there are no LED brake lights or turn indicators. GM has a particularly bad habit of omitting LEDs where they probably should be, especially in their premium offerings.

Despite being less utilitarian looking, the new Terrain still looks like an SUV, and that was likely crucial in order to get people out of their traditional passenger cars. 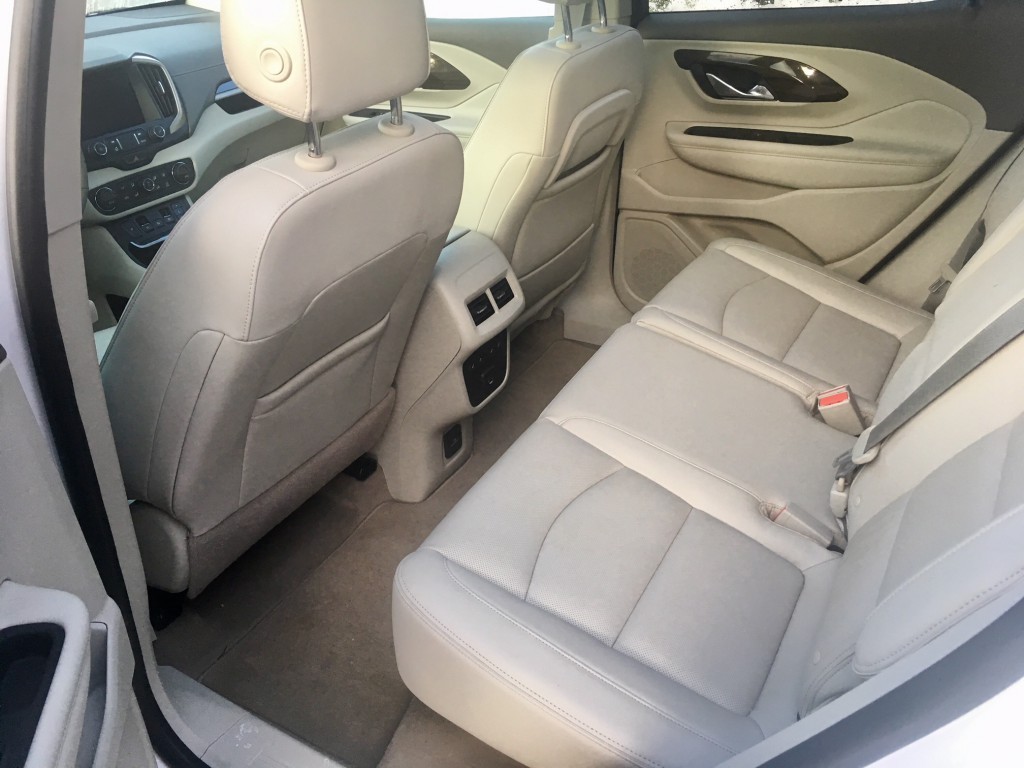 The redesigned interior is pleasant looking, especially with my tester’s light platinum taupe perforated leather seats. They help to brighten up the cabin and are generally comfortable. My only gripes are that both the driver and passenger seats could benefit from more thigh support and the light leather shows dirt and dust easily. They also seem to be the victim of stains from dark jeans, which gives them a blueish tint. 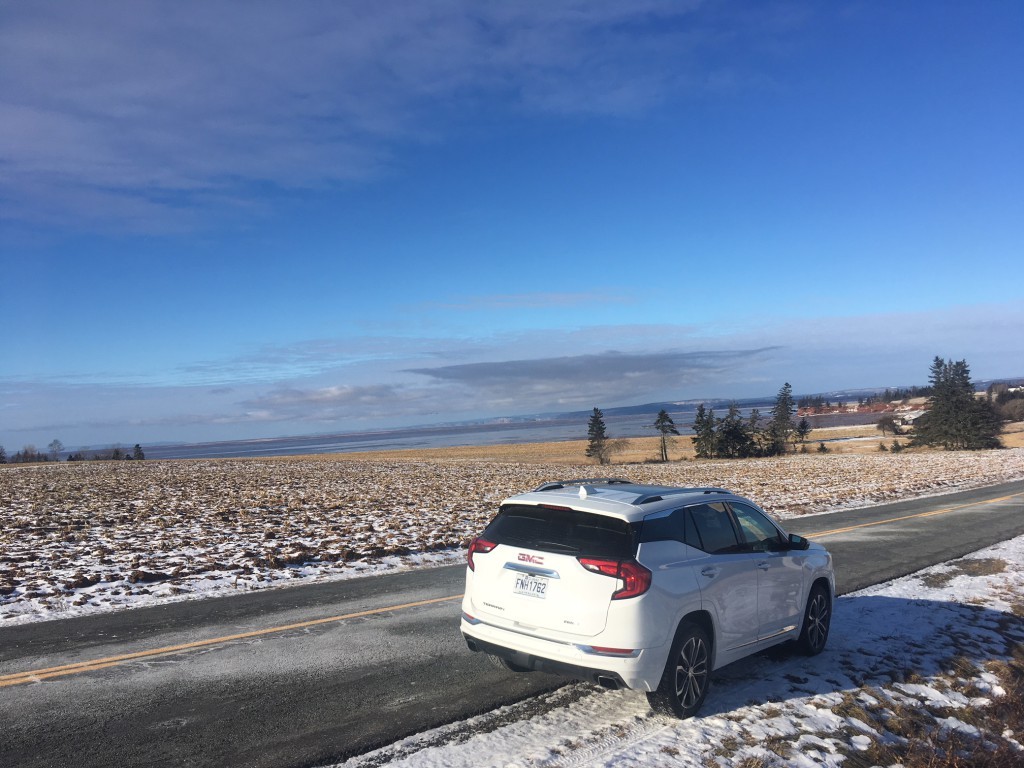 The new steering wheel feels good in your hands, though I wish GM had continued the tradition of replacing the GMC logo with the Denali logo – that made it feel a bit more special, but look closely and you’ll notice ‘Denali’ is embroiled into the surrounding trim. Lots of extra goodies such as a heated steering wheel, heated and cooled seats, wood and aluminum accents and more are standard with the Denali trim. 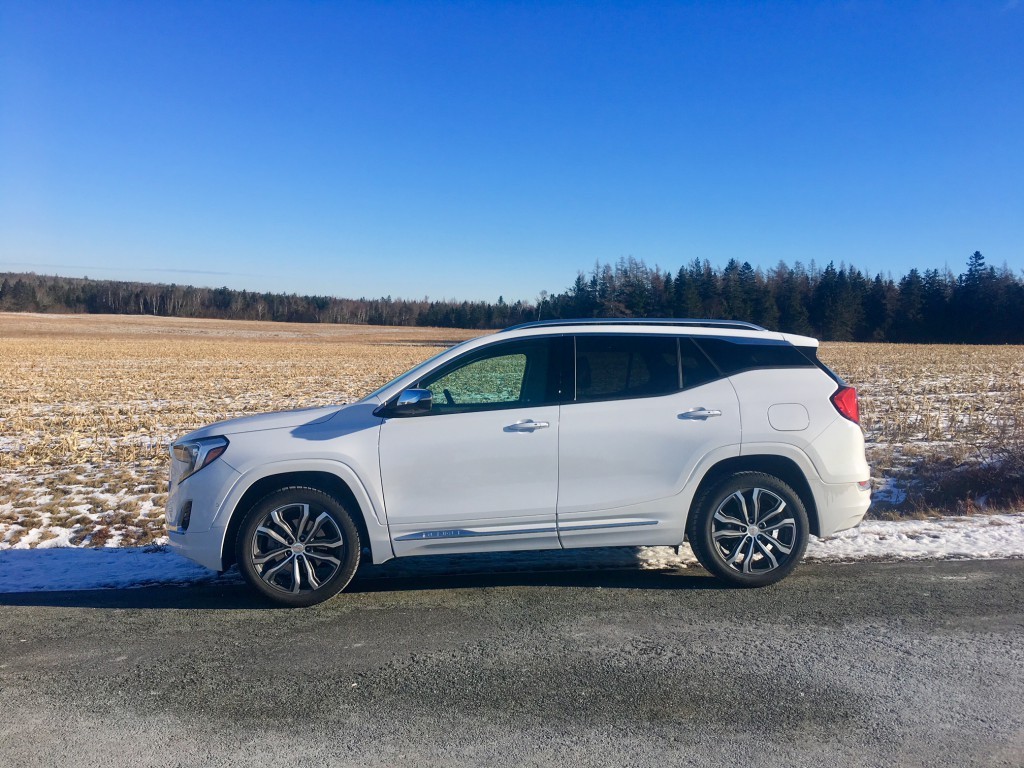 The elephant in the room is indeed the way the transmission operates. Gone is the traditional lever in favour of a series of buttons on the lower portion of the centre stack. Now, I’m not one of those baby boomers who bask in complaining about such things. Contrary to what my fellow baby boomer car-writers often whine about, I don’t find it particularly difficult to push a button to operate the transmission. I’m not an anti-push-button guy when it comes to gear selectors. I did, however, end up pushing the wrong button a few times by accident. While reversing I would go to hit the drive button to take off, but would accidentally hit the park button which brought the Terrain to an abrupt halt. Admittedly, GMC likely made a few buttons as levers in order to help alleviate that but it does require you to still look down to see which button/lever you are operating. By the end of the week I got used to the set up, but my only criticism would be their placement. They should be higher up on the console in order to see them better and some buttons are further out of reach from the driver than they should be. Also, believe it or not, you can shift gears manually with this set up, but the upshift and downshift buttons are tacked onto the low-gear button as an afterthought and they are comically small. 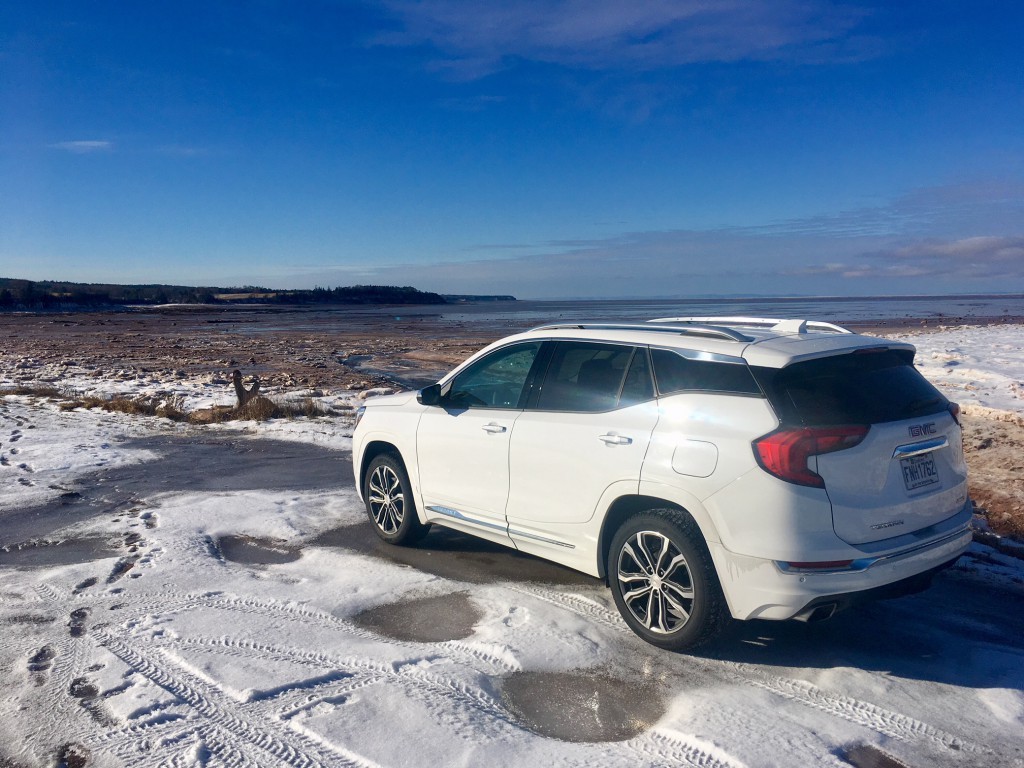 Still, as mentioned, the buttons are eventually easy to get used to and the main purpose of going this route in the first place is to free up more room. As a result, the centre console is expanded and there’s more room for the cup holders and additional storage cubbies.

The updated infotainment screen continues to be well-sorted and responsive. The new graphics make it look fresh and it is still quite intuitive to use. And yes, Apple CarPlay and Android Auto compatibility is available. 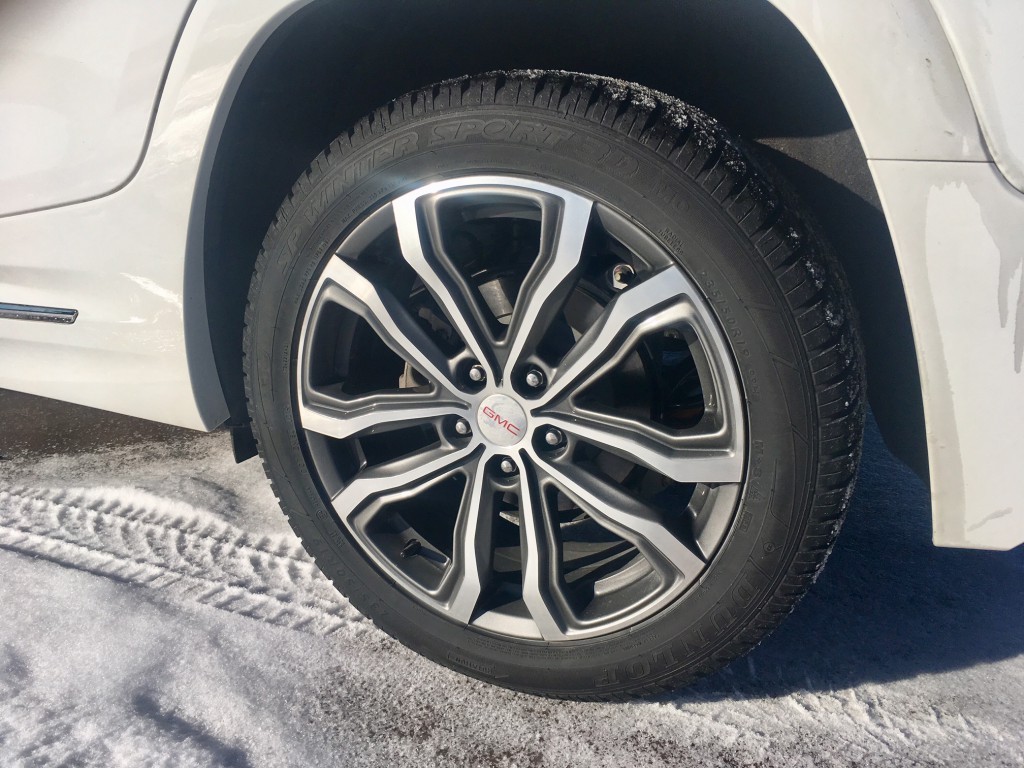 Even though wheelbase has been shortened, interior room doesn’t feel noticeably diminished. A duo of average sized adults will still fit comfortably back there, and they will be very appreciative of the rear heated seats, as was my aunt who was visiting from Toronto. Cargo room is down from the previous generation, but again, this didn’t seem to be an issue as her large suitcase and two carry-on bags fit just fine with no need to lower the rear seats. However, if we did have to fold them, GMC has now engineered them to fold completely flat.

The fact that the Terrain seems to do the job just as well as the outgoing model, while being smaller, would seem to suggest that the original Terrain was designed to be far too big to begin with. GMC may be starting to realize that bigger isn’t always better. 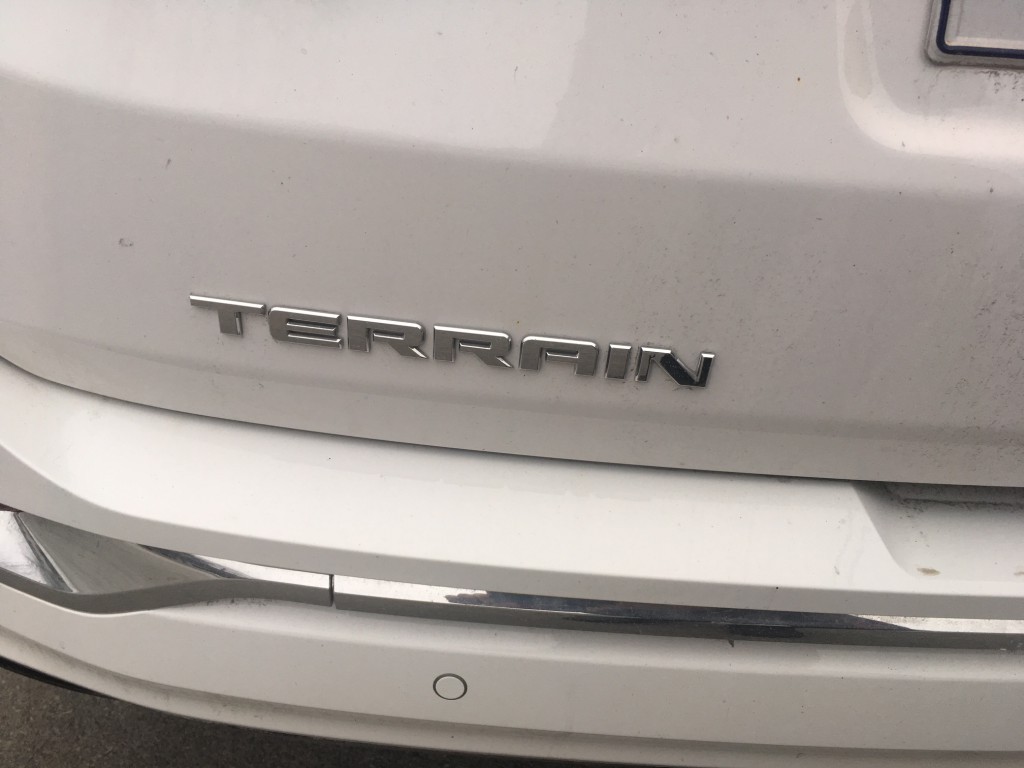 And they applied that thinking to the engine bay. Gone is the optional 3.6 litre V6 that produced 301 horsepower and 272 pound foot torque, which used to be standard in Denali trim. They have now favoured downsizing to a 2.0 litre four cylinder that is turbocharged and mated to a new nine-speed automatic. It’s good for 252 horses and 260 pound foot torque, so power is down too. But again, this new engine fitted to this new body style is just plain better. Before, the Terrain felt like a Great Dane trying to get itself up from a good night’s sleep when it took off the line. Now, it feels much more spritely, like a young Golden Retriever playing its first game of fetch for the day. Again, less is more it seems. The new Terrain is responsive off the line – perhaps a bit too much in some instances as I found myself unintentionally spinning the tires a few times off the line. That’s a good problem to have in my books. 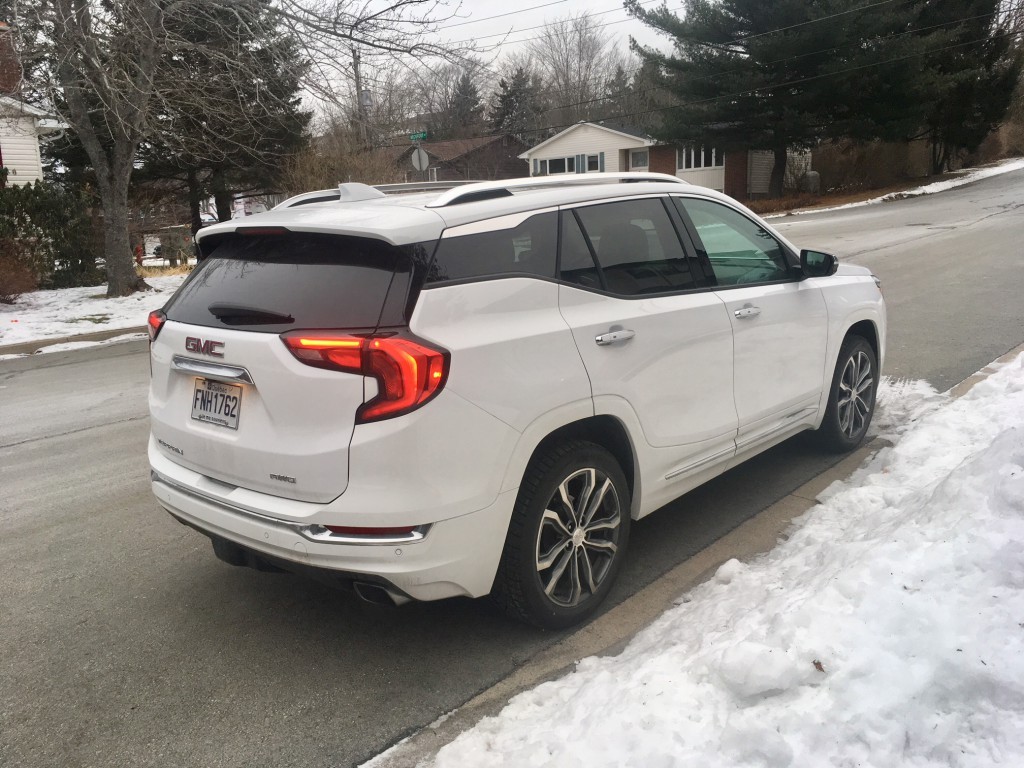 On the road, the Terrain behaves competently and balances comfort with performance decently. You won’t often feel bumps or imperfections in the roads, but you aren’t necessarily wafting over them or through corners either. Being an SUV that has been made more car-like helps both with comfort and handling. You can now throw the Terrain into a corner much more confidently. Don’t get me wrong, the Terrain isn’t prioritized to be a performance vehicle, it’s still an SUV and as such it still has numb steering with a vague on centre feel, along with a touch of body roll, but it’s much more stable than the outgoing version.

On the highway, the Terrain quiets down and glides its way through. The head-up display is easy on the eyes and keeps those same eyes largely on the road with which great. Other nice features for long-distance driving include blind-spot monitoring, lane keep assist and, new for 2019, adaptive cruise control and pedestrian detection. Kudos to GMC for adding the latter features finally, but truthfully, they should have been added long ago. 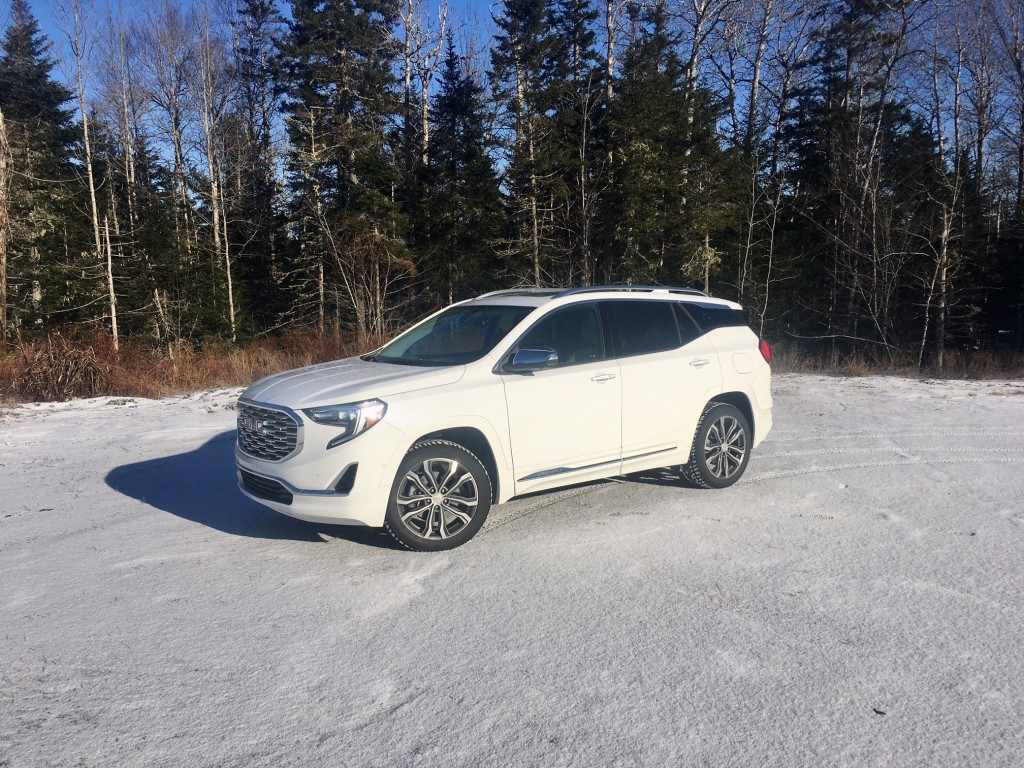 Official fuel consumption ratings come in at 11.2 L/100 kms in the city and 9.0 on the highway. After a week’s worth of mixed driving, in mixed weather conditions, I averaged 10.3. That isn’t too bad.

And the new Terrain itself isn’t too bad. In fact, it’s quite good now that it’s more car-like. And that it likely why GMC decided to make it so. Even though everyone thinks they want an SUV, most don’t consider the consequences of owning one which includes a clunky, jittery ride, lacklustre performance, lots more fuel consumption etc. People just like the idea of showing off a rugged lifestyle even though their lifestyle is far from it. In other words, they want an SUV that drives like a car. And that’s something GM likely caught onto.