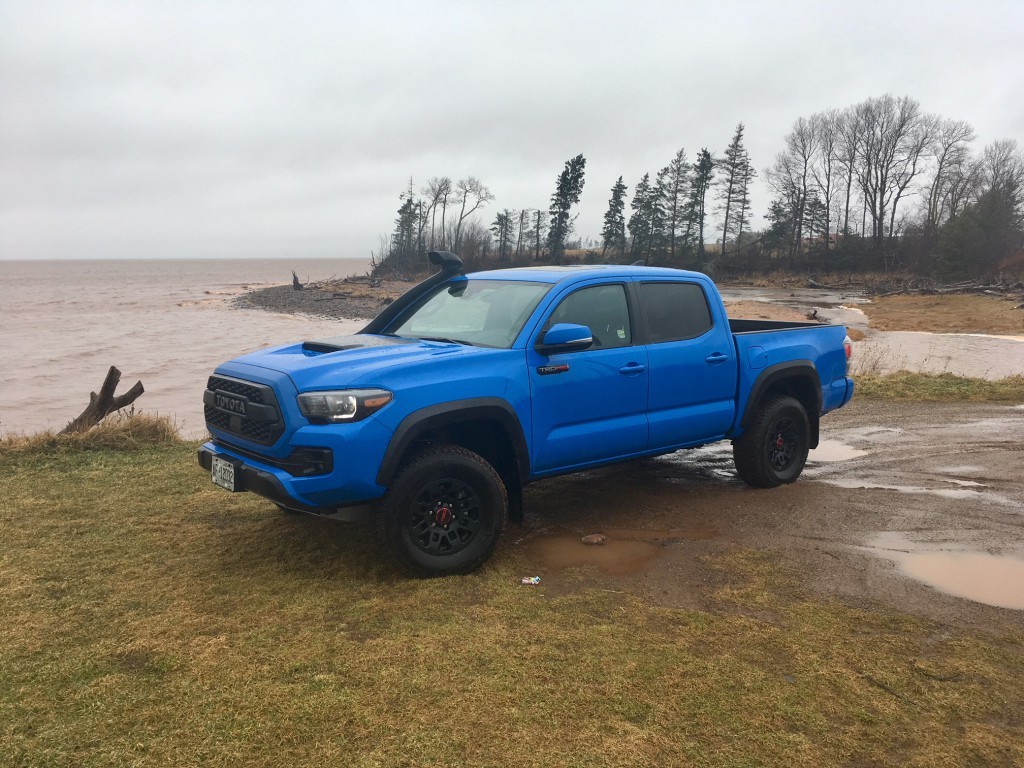 After having abandoned the segment not long ago, the big three domestic manufacturers have looked at their crystal balls and now envision mid-size pick-up trucks to be quite lucrative. That’s why General Motors invested the money needed to revamp the Canyon and Colorado, it’s why Ford is bringing back the Ranger and why even a company like Hyundai wants to get in on the action with their first ever pick-up truck.

But Toyota has held steady with its offering for a while now. Sales continue to be strong for the Tacoma, despite the fact that it is once again starting to get a tad long in the tooth.

A big reason why Toyota may feel it can solider on in an increasingly crowded marketplace with its current offering largely unchanged is both durability and resale value. Just ask a current Tacoma owner about their experience and they’ll likely talk your ear off about how indestructible Toyota trucks seem to be.

Still, with new competitors emerging, Toyota needs to remain competitive. One trick the folks at Toyota has always had up their sleeve comes from their in-house Toyota Racing Division (TRD). But in this case, they haven’t applied their talents to making the Tacoma a street racing sleeper.

The TRD Pro trims of Toyota trucks have long been a favourite of those who like to use their trucks for more than a grocery getter or Kent lumbar hauling champion. It gives much more credibility to the term, “off-roader”.

And if you’re going to have a tried, tested and true truck truly (hooray for alliteration!) compete where the pavement ends, it should probably look the part. Toyota has certainly delivered on that end. 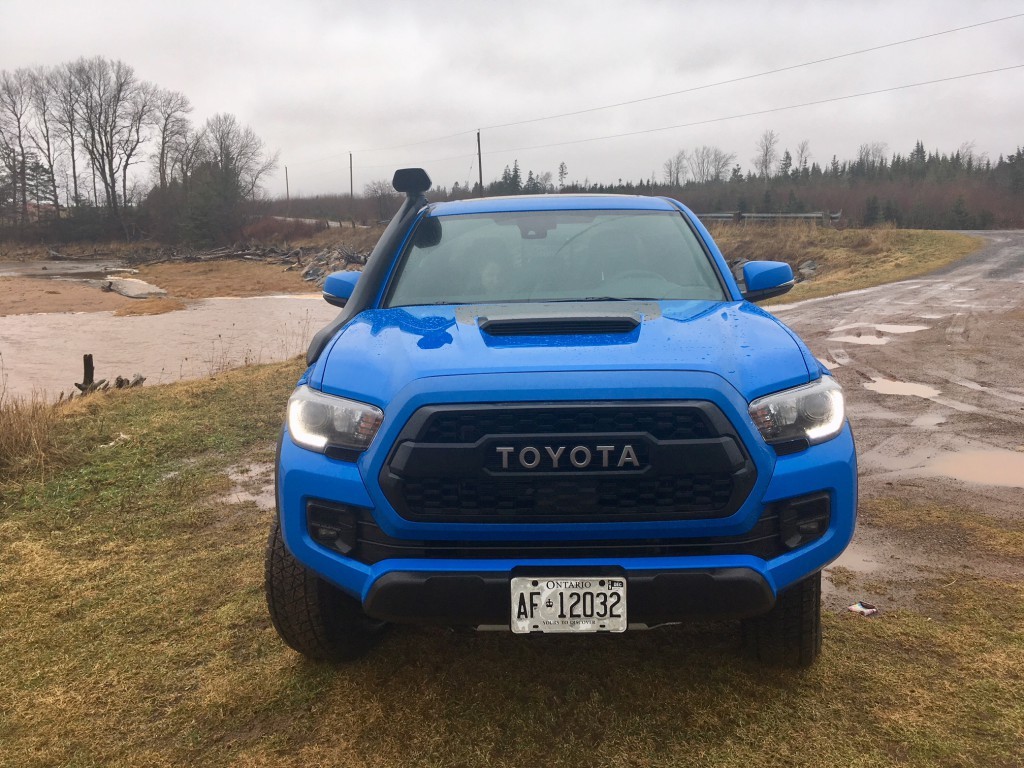 If it isn’t the new-for-2019 Voodoo Blue paint job that catches your eyes, it’s likely all the bulked up offloading bits, including the hard-to-ignore black tube that runs up the passenger side A-pillar. Your best guess is likely that it’s a snorkel for all those times you’ve been tempted to wade into a river with your truck, but it isn’t. It’s actually called a “desert air intake” and what it’s designed to do is funnel out all the dirt, dust and grime you’re sure too encounter while off-roading from the engine bay. That, and it just looks kinda cool. It isn’t an option and it even isn’t an accessory. If you opt for the TRD Pro trim with the Tacoma, it comes standard. 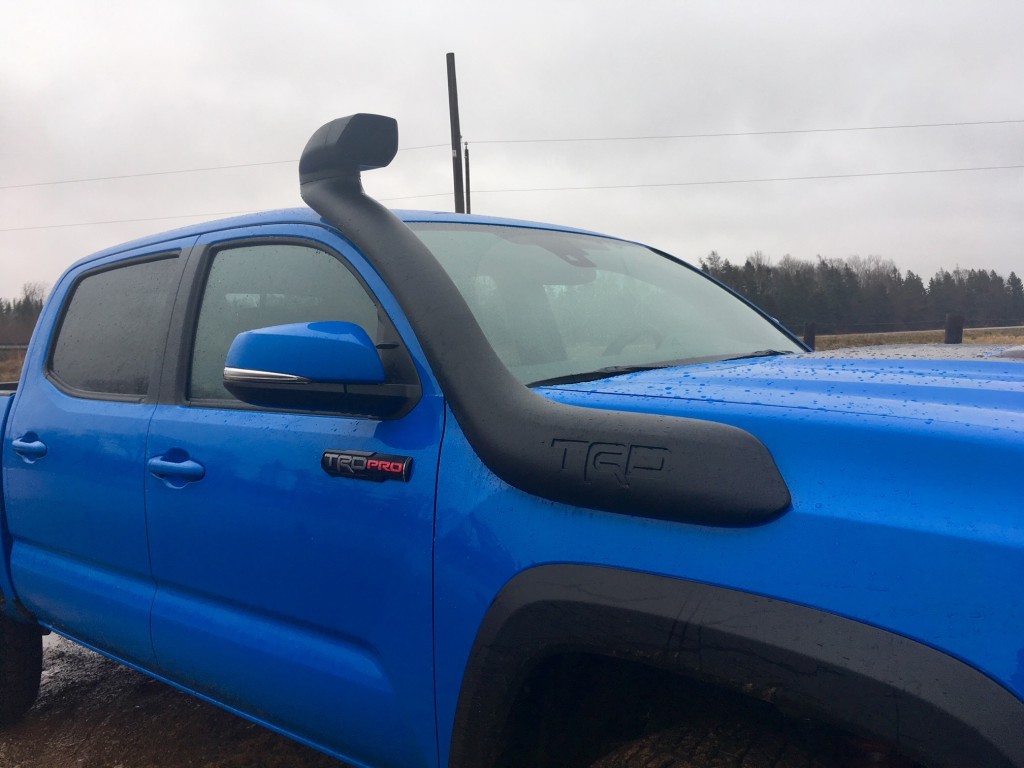 Other enhancements include beefy off-road tires wrapped around nice looking black 16-inch alloy wheels, an enhanced ride-hight, and a new TRD stamped aluminum front skid plate (there’s lots of TRD decals everywhere). Other new exterior features include black stainless steel exhaust tips and you can even have a sunroof now. Huzzah! You can even get LED fog-lamps as well, courtesy of Rigid Industries. There’s LED daytime running lights too, but if you’re looking for any actual performance lighting from the headlights, you’re still out of luck. No LED headlights are available, not even HID headlights are available. This feels like a huge oversight as those doing hardcore off-roading would likely appreciate the enhanced lighting abilities. If you’re going to go through to trouble of providing high-quality LED fogs, then naturally the first-step would be to address the actual headlights themselves, but I digress. 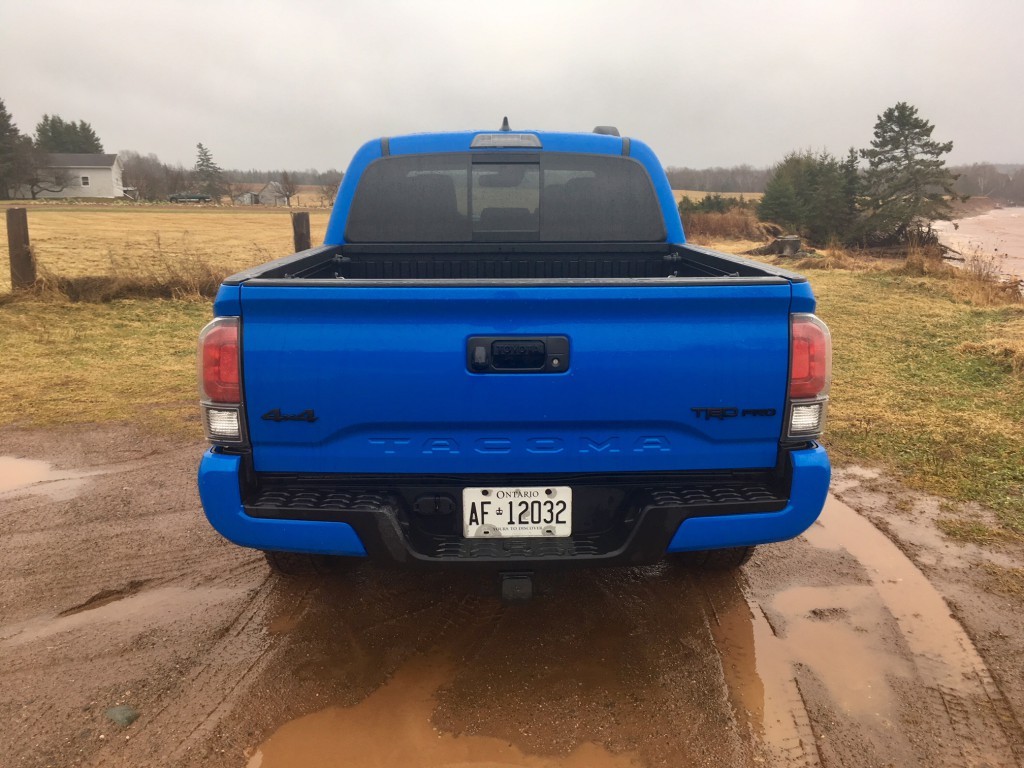 Overall, this truck looks fantastically rugged. This author is a particular fan of the colour, too, along with the heritage ‘TOYOTA’ marking on the front grille which replaces the Toyota symbol. It’s just enough to keep the Tacoma looking both fresh and credible. And having taken it to Nova Scotia’s gorgeous rural roads, where F-150s, Silverados and Rams rule the roost, it’s best showing up to local coffee shop parking lots with something that at least looks the part. Otherwise, you risk being on the receiving end of pointing and sneering. In other words, a Honda Ridgeline isn’t going to impress anyone from the countryside. 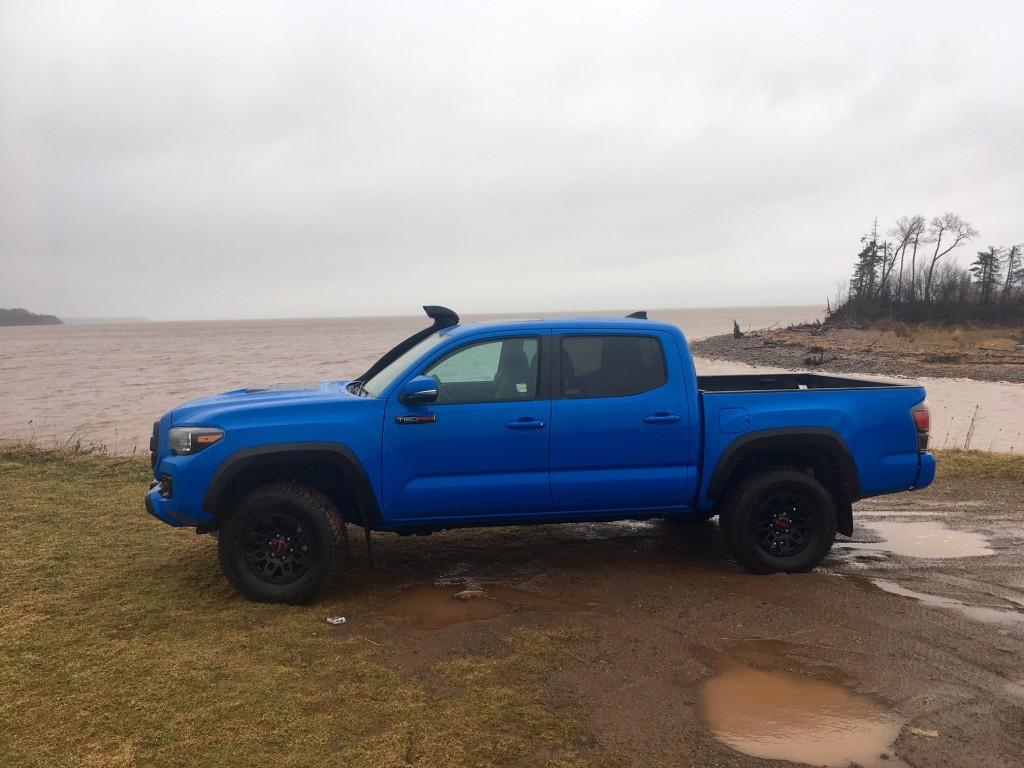 Inside, you’ll find a decently appointed – if a bit dated looking – cabin that is full of durable materials. It’s not a fancy interior, but it doesn’t have to be. Large dials and switches are great for gloved hands and the layout is clear and logical. 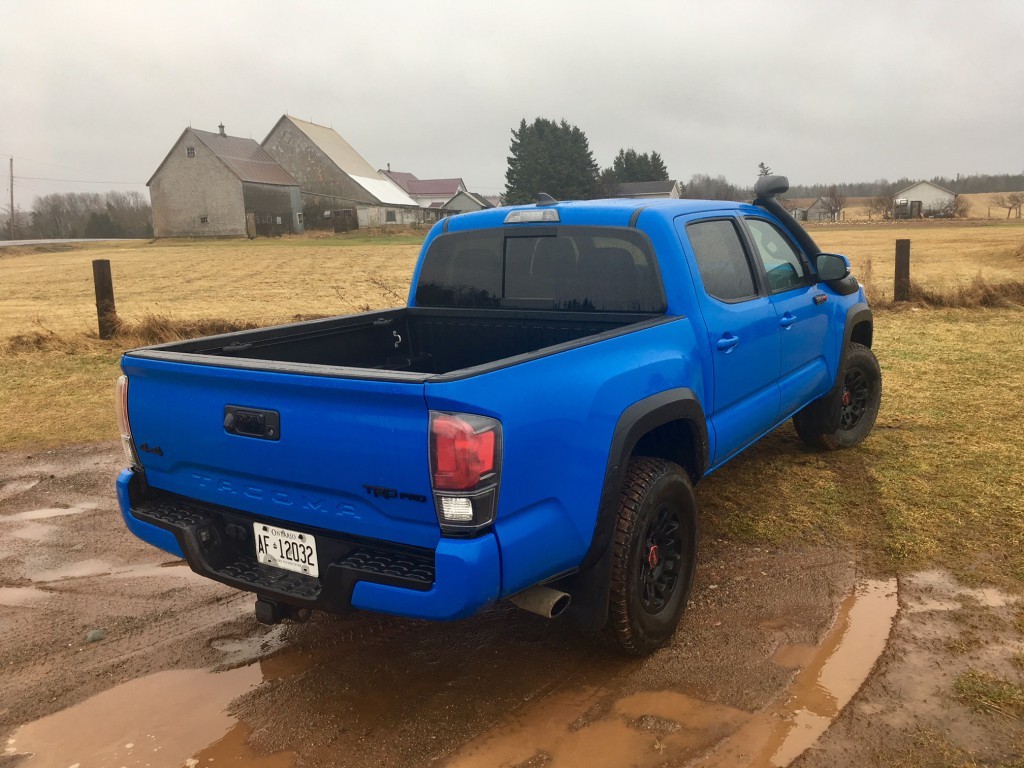 The double-cab configuration allows for a decent amount of room for rear seat passengers and the bottom seat cushions can be folded upward for more storage capacity. Up front, the seats are decently supportive but the driver may have a difficult time finding a comfortable seating position since the seat does not raise or lower at all. 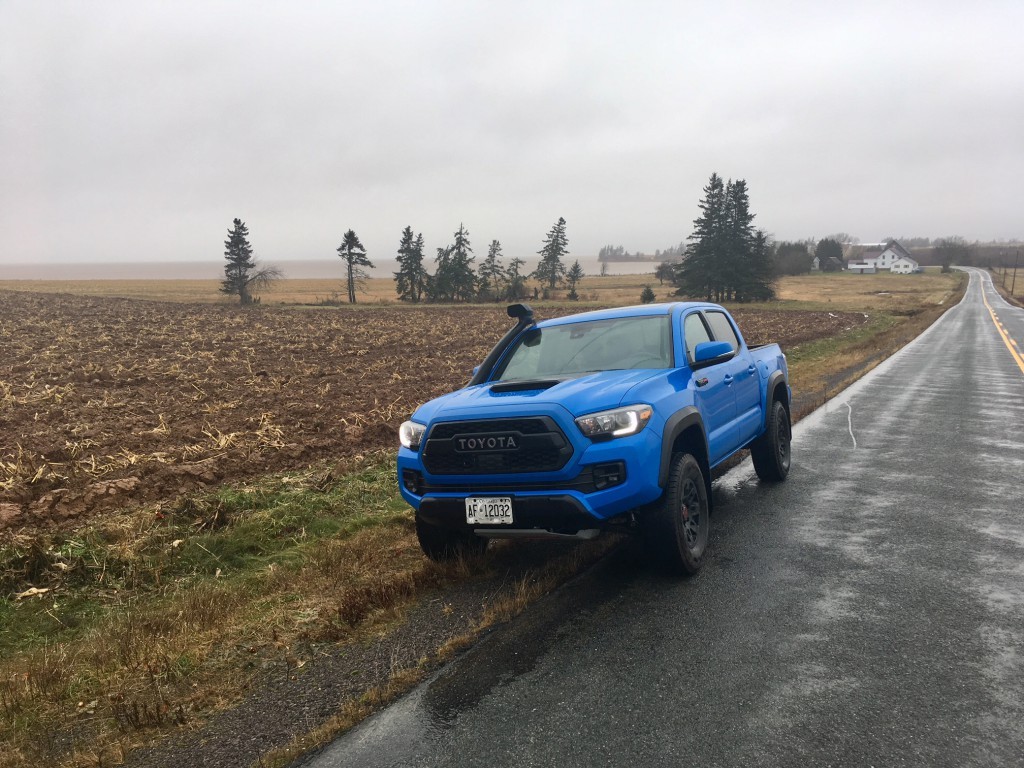 Powering the Taco is the same V6 option found in the engine bay of top tier trims for years. It’s good for 279 horsepower and 265 pound foot torque. Unfortunately, for 2019, Toyota has dropped the manual transmission option for the TRD Pro which is a huge shame. While the six-speed automatic is fine, I can’t help but wondering how much more fun this truck would be -especially while off-roading- with three-pedals. Regardless, the end result is a truck that certainly has enough power to get mostly any job done, but it doesn’t take off from the line with any sort of urgency or gusto. A loud and powerful roar is still satisfying to the audible senses and it’s good enough to tow up to 6,800 pounds. 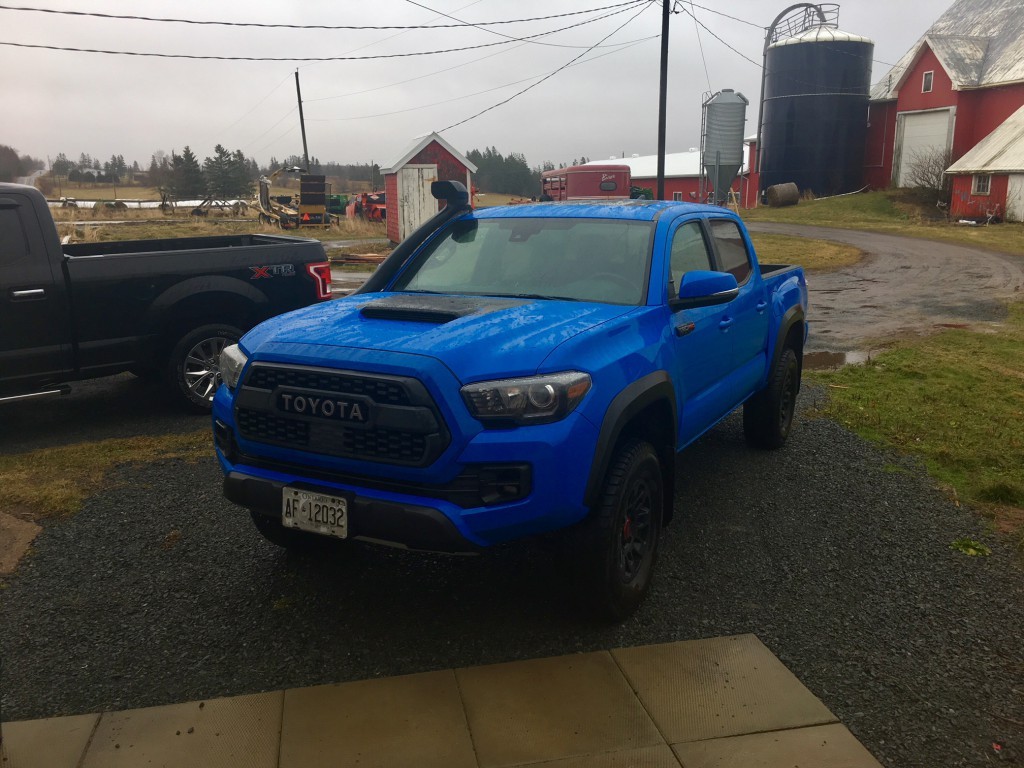 On the road (meaning on the pavement), the TRD Pro doesn’t feel as bumpy, jerky or uncivilized as you might expect from a true off-roader. It doesn’t feel as smooth as the Chevrolet Colorado ZR2, which I reviewed last year, but your passengers won’t be jolted when using the TRD Pro as your chariot to go out for dinner. 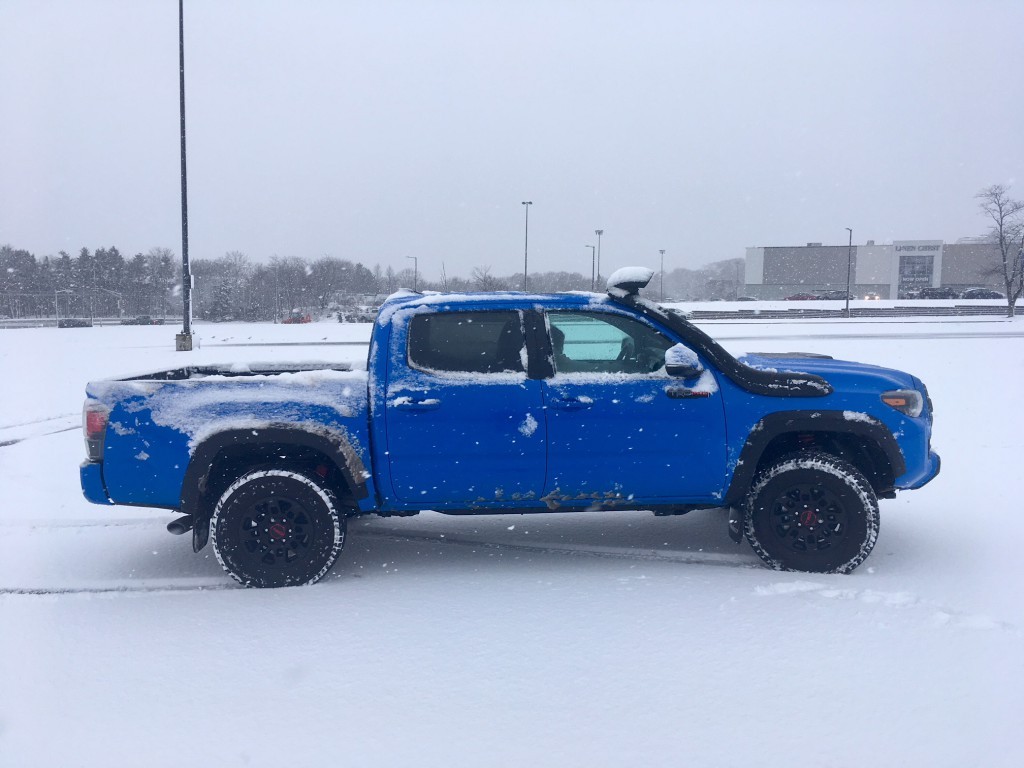 Its highway manners are a bit of a different story. That isn’t to say it’s uncomfortable on the highway, but wind noise is apparent and the transmission isn’t nearly as responsive as it perhaps could be. Without really knowing which gear to settle down into, and lots of drag coming from that desert air snorkel, you can expect to pay more at the pumps. I was averaging 14.5 L/100 kms during my drives in the city. A couple highway trips out to the country helped to bring that figure down to 13.7, but it’s still on the thirstier side. 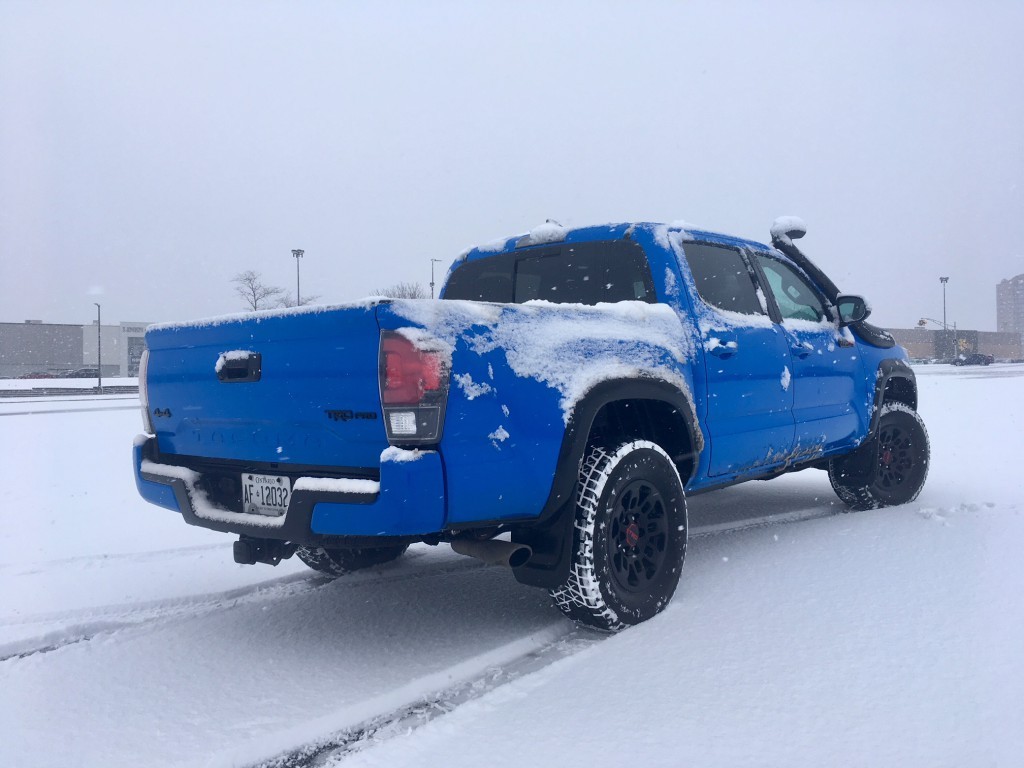 Fortunately, or unfortunately depending on how you feel about snow, we received a sizeable snow storm during my time with the Tacoma TRD Pro. Ordinarily, I’m steadfast in my hatred of snow, but this time I was excited because I knew what was in my driveway. 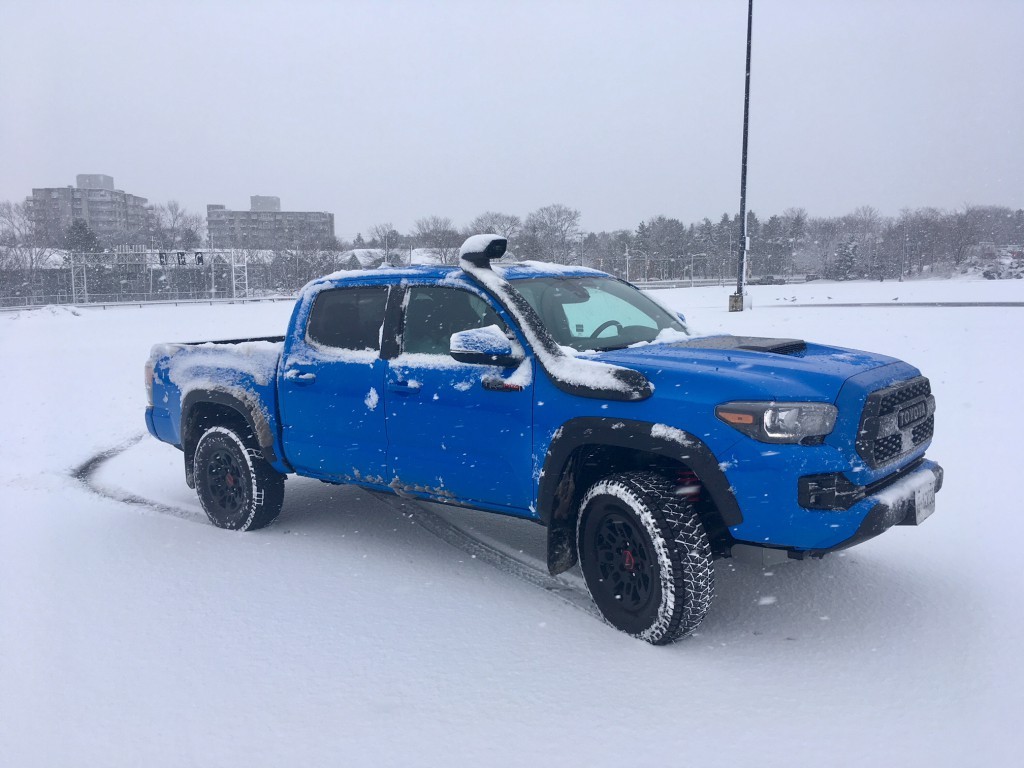 With my fiancee having an appointment to get to in the middle of the blizzard, I eagerly took the keys to drive her there. Not only did the Taco prove it is a legit fighter against anything Mother Nature can throw at it, but we passed a lot of SUVs and other pick-up trucks struggling to gain traction along the way. I tried not to look too smug as the TRD Pro blasted its way passed as if it was Jon Snow (I’m a part of the 1% of the population that has never seen Game of Thrones, so I have no idea of that analogy even makes sense). The point is, snow is no problem for this Taco. 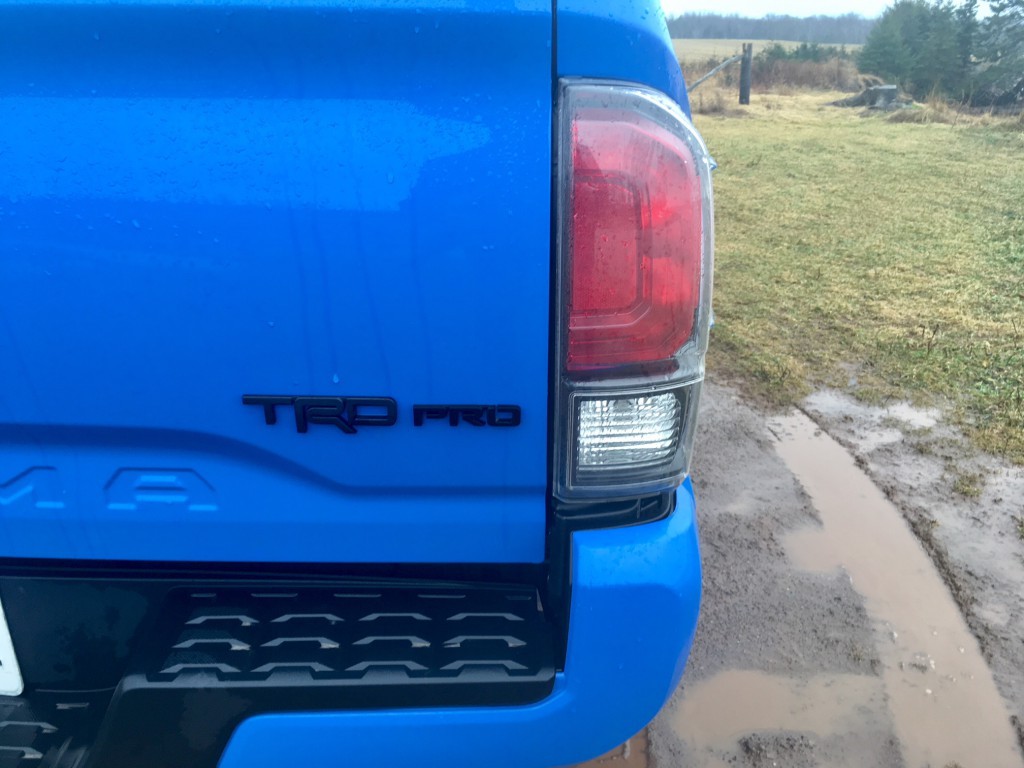 Now, as a true off-roader, it comes with all the stuff you’d need such as a crawl feature which allows the driver to solely concentrate on steering while the truck takes care of both propulsion and braking itself. There’s also 4-high and low, which is manually operated, TRD tuned front coil springs, TRD tuned rear leaf springs, and Fox shock absorbers. The latter didn’t feel as refined or advanced as the multimatic shocks found on the Chevy Colorado ZR2, but they’re certainly capable and do the trick just fine. 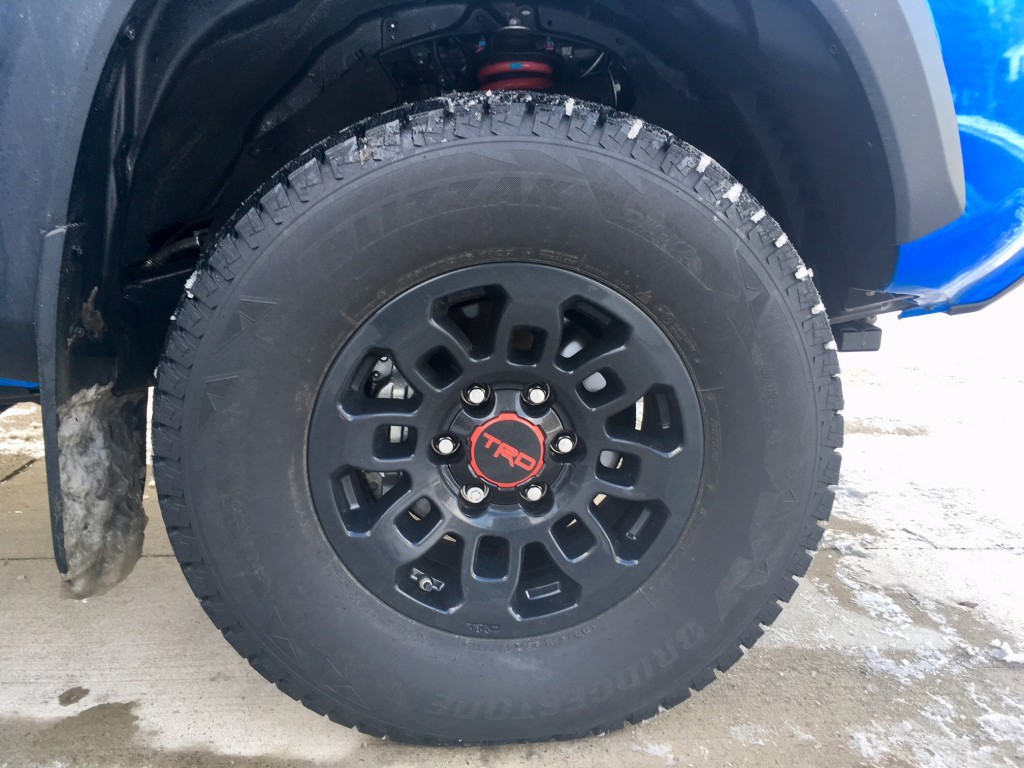 Is it as good as the ZR2? It depends. The ZR2 benefits from being newer and it feels a bit more capable. Those shocks turn it into something you could live with every day. The Tacoma, while still capable, feels like an older truck that has been enhanced. There’s a difference. 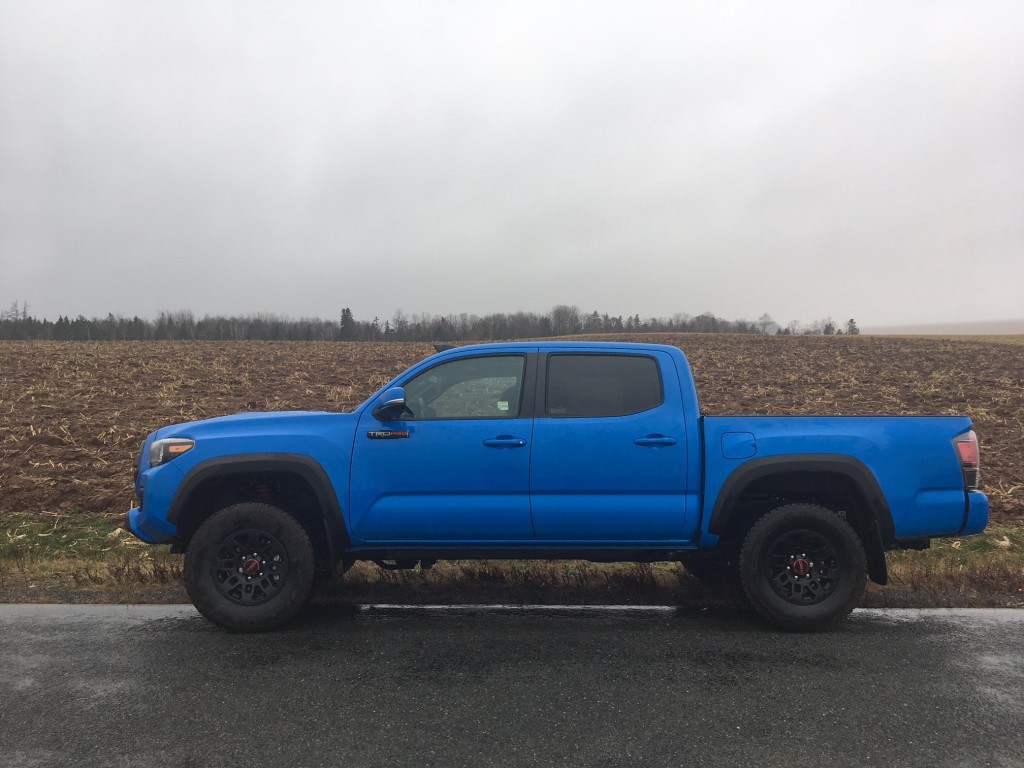 But despite being quite impressed with the ZR2, even admitting that it is the more capable truck, I think my money would still go to the TRD Pro. Looks-wise, it’s better to my eye and I personally love that ‘old-school’ truck feel that, for better or worse, seems to be a characteristic of both the Tacoma and Tundra. The added appeal of good resale and indestructibleness helps put the TRD Pro a hair ahead of the ZR2 for me. 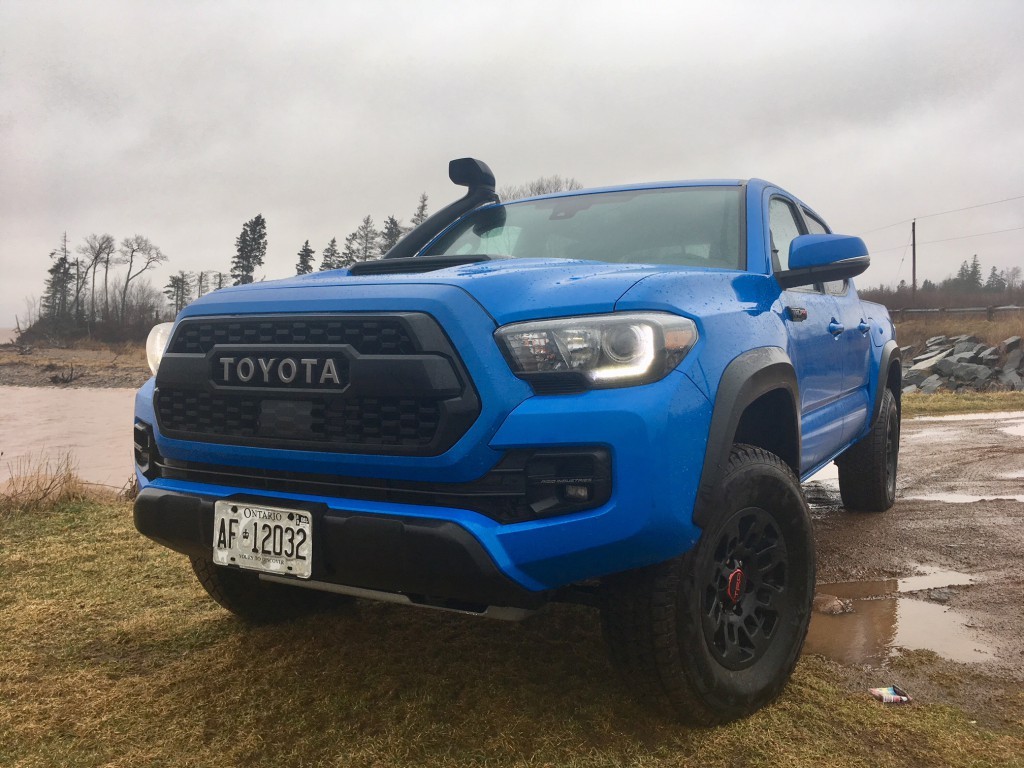 It should be noted that you can get the larger Tundra and 4Runner SUV as TRD Pro variants too, making the TRD Pro brand much more varied.

But, truthfully, you can’t go wrong with either the ZR2 or the TRD Pro. It will all boil down to personal preference.