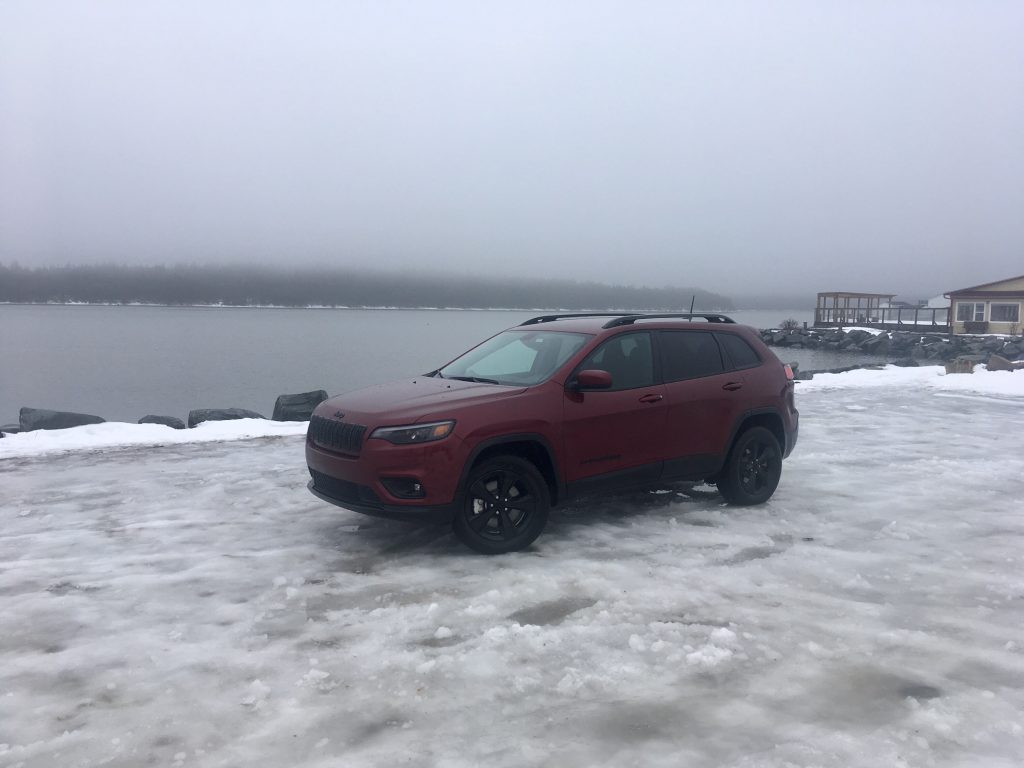 “Take the Cherokee,” I texted back to my friend.

She was in the process of playing the rental car lottery. She had originally chosen a compact car when she reserved it online, but after getting to the rental agency, she was told there were no compacts available so she was being upgraded to an “intermediate SUV”.

That meant she had her choice of a previous generation GMC Terrain, a Ford Escape and the Cherokee. She wanted my advice on which one she should go with.

“Really?” she texted back. “I was going to take the Escape because I thought you liked them”.

Truth be told, I’m not really a fan of any SUV. The Escape with the 2.0 litre EcoBoost engine is interesting to be sure, but I doubted the rental agency would have opted to purchase an Escape with that engine. I had also just completed a two week stint with the new Cherokee.

Jeep has recently refreshed the Cherokee and it now has less controversial styling elements. For instance, the front end design of the previous generation was a sticking point for most people and induced heart-attacks for Jeep purists. But the front end has been softened down. The grille is a lot less angular, the headlights are back in the same unit as the turn signals, and the lower bumper also gets a re-work. Around back the tail lights get a redesign as well. And I am delighted to report that, as with the new Ram 1500, LED amber turn signals are now the name of the game for the Cherokee and standard on every trim. Keep that trend going, FCA. But overall, the look is meant to appeal more broadly. My tester was also fitted with the Altitude package which helps enhance the exterior design with gloss black 18-inch wheels, gloss black badging and grille surrounds, black contrast stitching and premium Continental tires.

Normally when press cars are sent my way, they are fully loaded to the nines in an effort to woo journalists with all the bells and whistles. However very few people actually buy the top trim models. So it was refreshing to be in a vehicle that doesn’t spread its feathers like a peacock. Being a middle of the pack trim model, you won’t be greeted with swanky leather, unique contrasting colours or a huge infotainment screen when you step inside. Instead you’ll get a smaller screen that still responds quickly to commands. There are nice big buttons underneath that are easy to use even with a gloved hand and quality of materials are certainly acceptable, though hard plastics can still be found throughout. My tester, thankfully, had the cold weather package which meant heated seats and steering wheel, though their activation is still done through the touch screen. Please just give us hard buttons for those, FCA.

Many people like the Cherokee because it is the Goldilocks for most. Not too big, not too small, just right. That means the interior isn’t huge, but it also isn’t cramped. Same goes for the cargo area, which is good enough for 730 L of space. It also means that the Cherokee is a pretty easy vehicle to drive overall. It’s easy to park and easy to maneuver about in tight spaces.

My tester came with Jeep’s Active Drive, which is a selectable mode based on the environment you are currently driving in. There’s normal, snow, sand/mud and sport. Since I had the Cherokee back when snow was still a thing (please don’t let it be a thing any more, Mother Nature. I implore you), I had the opportunity to give it a try. To be honest, the Cherokee handled snow fairly decently in regular mode. Switching to snow mode allows for a lot more fun. For instance, four-wheel drifts aren’t completely out of the equation for the Cherokee. Uh, that’s what I hear anyway. But out of all the vehicles I had this past winter, the Cherokee was easily in the top three for how it handled the miserable stuff. Being a Jeep, that should surprise no one, but it’s nice to know that you don’t necessarily need to pony up to the Trailhawk model in order to get a capable vehicle.

The Cherokee is one of the few in the segment where you can still opt for a V6 if you’d like (I think only the Mitsubishi Outlander is the only other choice). However, new for 2019 is an available 2.0 litre turbocharged engine that churns out 270 horsepower and 295 pound foot torque. This engine is a $2,600 option and was fitted to my tester. To compare, the 2.4 Tigershark four cylinder makes 180 horses and 171 pound foot torque while the 3.2 litre V6 makes 271 horsepower and 239 pound foot torque. Comparing side by side, the 2.0 litre seems like the best bang for the buck in terms of power and efficiency. In fact, I’d be surprised if the V6 hangs around for much longer given what the smaller displacement is capable of, so if you’re the type that prefers a V6, get it while you still can. All engine options are mated to a nine-speed automatic.

In terms of how the 2.0 litre performs, it works quite well. The Tigershark 2.4 litre with the nine-speed was dreadful to drive (I tried it in the Renegade a few years back). But in the new engine, they work together seamlessly. The transmission especially seems to have been reworked for much smoother shifts and largely does its best to stay out of the way. Sure, the sound the engine emits isn’t the most refined in the world, but power is certainly not lacking and it feels as if it’s delivered with much more oomph than the V6. But overall FCA should be commended on this combo and it would certainly be the one I would choose.

Being a Jeep, ground clearance is better than most of its rivals. That does mean a bit more of a step up to get inside, but it also means a higher drive position, which apparently is something everyone covets (not me, keep me as low to the ground as possible). But that ground clearance also means you won’t be taking any corners like Mario Andretti. There’s noticeable amounts of body roll when the Cherokee is pushed in the corners and if you ever need to make a hard brake, the Cherokee takes a bow as it obliges.

On the highway, while happy couple engine and transmission does their best to stay quiet and out of the way, there’s a fair amount of road noise that comes into the cabin. The Cherokee with take bumps and other imperfections adequately, but you certainly feel it. It’s a bit of a bouncier ride than its competition, but certainly nothing that impedes overall comfort.

Officially, the Cherokee, when fitted with 4×4 and the 2.0 litre engine, is rated at 11.2 L/100 kms city and 8.0 highway. After a couple of weeks of mixed city-highway driving I was able to return a rather impressive 9.6 L/100 kms. So really, while choice is always good, it’s clear which engine you should get, especially when the V6’s numbers come in at 12.2 city and 8.7 highway.

It’s also clear that the Cherokee is certainly more than worthy to play in this extremely competitive segment. It is right-sized, has off-roading credentials that most of the competition doesn’t, now looks more mainstream and has a great engine/transmission combo. There’s some small let downs in the way it drives, but overall this is a pretty decent package. Enough to advise my friend to take it over the other choices at the rental agency.

The only real glaring issue is one that hits your pocket book. Keep in mind, the North trim is only one up from the base model. With all the option packages added on to my tester, the total price landed just shy of $44 grand ($43,865 to be exact, including destination). 44 grand for a vehicle with no leather, a small screen, no active safety or tech etc. is a hard pill to swallow. All you need to do is head over to Jeep.ca to find that the top of the line Overland model starts at around $37,000. If you take the 2.0 litre engine (which is costs $995 at this trim for some reason), add the most expensive paint option ($245), take the two only packages available (trailer tow for $595 and the tech pack for $995) add in the dual-pane panoramic roof ($1,595), you’re grand total still comes in cheaper than my tester at $42,517. Can someone from FCA explain that one to me? Why on earth would anyone take a North trim model and add in some creature comfort option packages when you can get the literally fully loaded Overland model with way more features and save $1,348 in the process?

While I appreciate Jeep sending a trim that most are likely to consider buying, in this particular case, it makes way more sense to buy the fully loaded model. You’ll get so many more goodies for less. I think this is the only time I’ve ever advised someone to take the top trim over the mid-trim.

Be sure to be mindful of pricing, otherwise the Cherokee is certainly a worthy contender in a crowded segment. This refresh improves upon the faults of the older model and the overall result is a well rounded SUV.