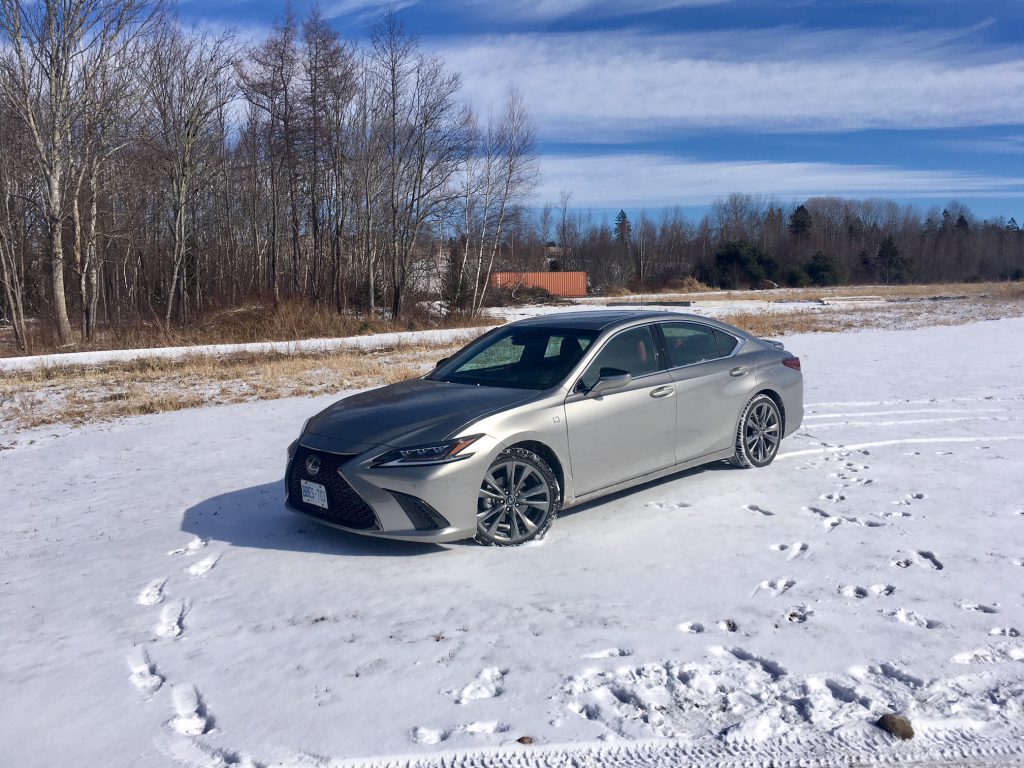 My fiancee and I are well acquainted with the ES from Lexus. We selected it as our chariot during our stint in Toronto a couple of years ago for the Canadian International Auto Show.

Not long after that, Lexus Canada was kind enough to send one to try in our own, more familiar environment. This time it was the hybrid version and we thought it would make the perfect vehicle for a day-trip down the South Shore of Nova Scotia.

We both agreed that the ES is a competent vehicle that largely succeeds at its main function: to provide a coddled ride with substantial amounts of luxury included. It’s a great companion for longer drives, is exceptionally quiet and mostly prefers to stay out of your way. There’s nothing wrong with that.

But my fiancee and I are the types that order our Pad Thai extra spicy. Not even extra spicy, but Thai spicy or as spicy as it can possibly be made. Almost every meal with make together includes Scoville levels that would make even the most distinguished hot sauce connoisseur hit the mercy button.

The ES, to us, has always been Pad Thai without the spice; still delicious and perfectly acceptable, but not particularly thrilling.

This is something Lexus has hoped to address with the new ES. Not only has it been given a significant overhaul, but Lexus has been kind enough to plunk down a bottle of hot sauce next to our proverbial plates in the form of the F-Sport package – something previously unavailable on the ES.

Once again, Lexus Canada was kind enough to send the new ES our way, and they included that bottle of hot sauce – the F-Sport package – to boot.

Design-wise, the F-Sport adds rather nice looking 19-inch wheels, a black grille with a very interesting pattern (seriously, take the time to study the detail, it’s quite intricate), along with triple beam LED headlights (all exterior lighting is LED, including the rear turn signals which properly flash an amber colour, not red), a rear spoiler and F-Sport badging. Lexus has hit this design out of the ball park. It looks fantastic from any angle.

If you are the type that prefers a more restrained look, Lexus offers other packages such as the ‘Luxury’ and ‘Ultra Luxury’ packages, which tames the exterior, but still keeps the ES looking handsome and elegant.

Inside, Lexus probably expects the first thing to catch your attention to be the massive 12.3 inch screen fixed atop the dash. But, in my particular tester, the first thing everyone noticed were the intensely red seats with black accents. Personally, I love red leather, and they felt of high quality along with good support. A good feeling and nicely designed steering wheel helps to complete the look which, for an ES, is quite spicy indeed. Though it should be mentioned the red-hot seats were not everyone’s cup of tea.

A sore spot that needs to be discussed is the infotainment system. It is huge, clear, crisp and operates relatively quickly and usually on command, but the manner in which it does so isn’t particularly intuitive. You’d think it would be since it uses a track pad like on a laptop to operate it, but I found it to be overly sensitive and sometimes the ‘curser’ would end up in the exact opposite part of the screen I wanted it to be. It also caused me to take my eyes off the road more than it probably should have. Still, it’s something that you would get used to after learning its mannerisms and the haptic feedback helps as well.

And speaking of screens, the display for the gauges is also clear, and is configurable as well. A cool trick is showing people that the tachometer can magically float in one direction or the other. This is something Lexus first debuted on the LFA supercar. Unfortunately, the LFA is no longer a pursuit of a Lexus, but it’s good to know that bits of it are being incorporated into their every day offerings.

Once everyone first noticed the red seats and the huge screen, their attention was focused on two knobs that protrude just above the fancy gauges. The one of the left turns the traction control off (not something I expect many owners will often do) and the right knob allows you to select the different driving modes available which include Eco, Normal, Sport and Sport+. I’ll get to those modes momentarily.

The new ES is now lower, longer and wider which is half the reason why it looks so good from the outside, but it does make getting in and out a little bit trickier. Still, adjusting the wheelbase makes for more interior room – something which is good whether you’re in front or in the rear.

Powering the ES 350 is a normally aspirated 3.5 litre V6. I’ve been reviewing new vehicles for the past seven years and I have to say, it is a rare treat to be driving a no-nonsense V6 again. Most manufactures are downsizing and adding turbochargers. Thank you for sticking with the tried and true in the ES, Lexus. The unit is good enough for 302 horsepower and 267 pound foot torque mated to an eight-speed automatic. On paper those numbers look enticing but power delivery isn’t done with any sort of urgency. It certainly can’t be called slow, but I would prefer it if, especially in sport mode, the ES reacted with the same gusto I would expect from such a sharp looking car with red seats.

It should be noted that the ES’s power goes to the front-wheels only. This feels like a missed opportunity as consumers are flocking to SUVs and CUVs with the main reason why being attributed to the available all-wheel drive. Adding all-wheel drive to the ES would certainly make it more appealing in the Canadian market.

As has become tradition for my fiancee and I when we have the keys to an ES, we decided to take the it on a road trip. The hour long trek to the valley made us feel like we were like we were somehow more important than we actually are; the ES made sure of that with its ultra-quiet cabin (this may be among the quietest cabins I’ve ever experienced), and a smooth-as-butter ride with the ability to soak up bumps and other imperfections on the road, even with those 19-inch rims with tires that look like they were painted on. Seriously, if comfort is your main priority, look no further than the ES.

Our trip involved the opportunity to take some empty countryside backroads which gave me the opportunity to try out the different drive modes. Sport mode sharpens up the responsiveness of the throttle and steering while adding in the + makes changes to the suspension. While the sport modes don’t suddenly transform the ES into an LFA, this is easily the most responsive and sporty ES I have ever experienced. Hardcore performance enthusiasts should check out the GS-F or the RC-F instead, but for those who get the odd jolt of testosterone behind the wheel ever now and then, the ES is now happy to enable such moments.

Taking a corner in Sport + can now be done with a fair measure of confidence to the driver. Understeer rears its head if you become a bit too spirited, but it largely stays out of the way. Body roll is minimized as well.

In other words, I’m happy to report that the F-Sport package doesn’t merely add in cosmetic enhancements. The adaptive suspension really does help the ES gain credibility to go with the aggressive exterior design.

Eco mode does what you’d expect it to do, which is to say, it neuters the ES in almost every situation. While this would be advantageous to use in shorter trips or stop and go traffic, if fuel efficiency is your main concern, there’s an ES for that and it’s called the ES 300h, with h presumably sanding for hybrid.

Truthfully though, in those moments where you aren’t trying to do your best Andretti impression, the ES is best left in normal mode and it handles normal driving exceptionally well.

But there’s no doubt that this is the best ES Lexus has ever made. The vehicle once dismissed as a senior-mobile has had some much needed spiciness injected to it, especially if you opt for the F-Sport package. It looks fantastic, has a great interior, improved driving dynamics and you can still get a trusty V6.

The bland meat and potatoes has been transformed into a deliciously tantalizing Madras curry. And that’s very much a good thing.

– Infotainment system not as intuitive to use as other systems
– Good power, but doesn’t deliver it with gusto
– No all-wheel drive option available