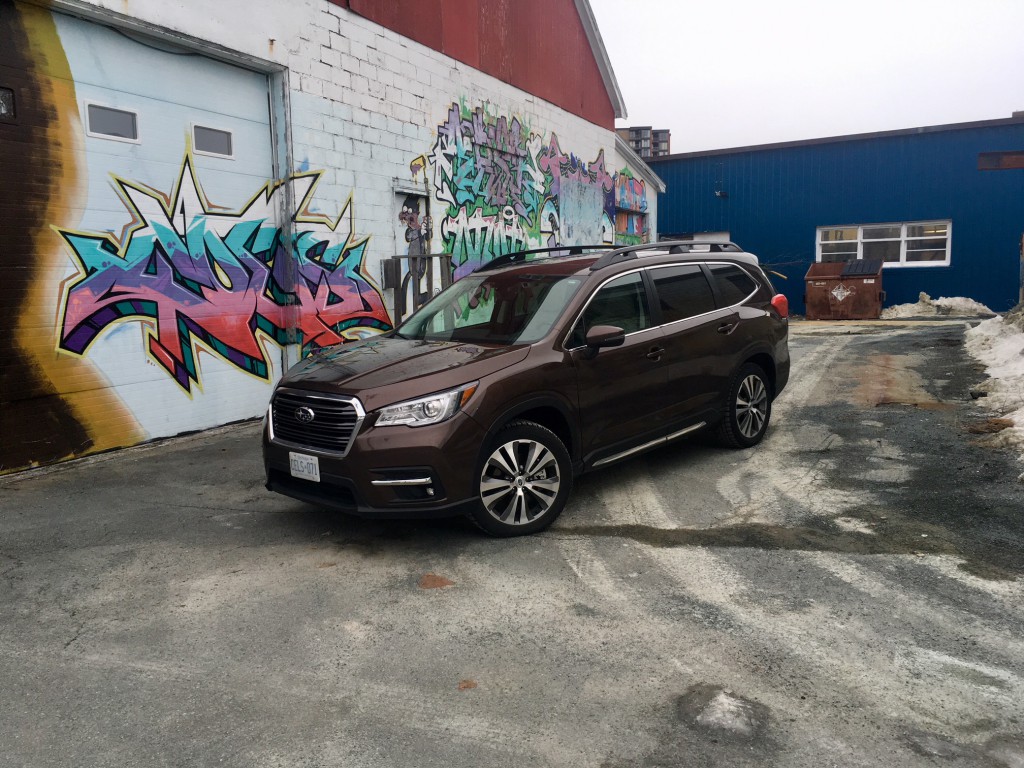 A couple years ago, Subaru lost a sale.

I was put in touch with a friend of a friend who was looking to upsize from his Dodge Charger sedan to an SUV with three rows of seating. He felt this was necessary for a couple of reasons:

2) He had a baby on the way to join the two little ones he already has.

My efforts to persuade him into minivan territory were predictably unsuccessful.

(Seriously guys, if space is your main priority – whether it be for people or stuff – then a minivan is the smartest way to go. Toyota even offers theirs with all-wheel drive).

He said he heard great things about Subarus, specifically how they tackle Canadian winters. He heard correctly.

Most Subarus come standard with all-wheel drive. And I mean proper all-wheel drive here the power is constantly sent to all four wheels, as opposed to other all-wheel drive systems where all four wheels are only powered if slippage is detected. When fitted with good winter tires, Subarus become quite tank-like in the snow. This was very appealing to him, so he asked if there was anything from the Japanese brand that would fit his requirements.

Unfortunately for him, I had to burst his bubble. The Outback was the largest offering from Subaru at the time. And while he was initially open to it, he was adamant that he needed three rows.

That eliminated Subaru as a brand completely.

He ended up in remaining in the Dodge family in the end and, as far as I know, is still driving around in his Durango today.

Subaru’s lack of a three-row SUV wasn’t an issue I often encountered when dishing out car buying advice, but it did point to a glaring omission in Subaru’s line-up. People believe they need more room than the Outback or the Forester can offer them. 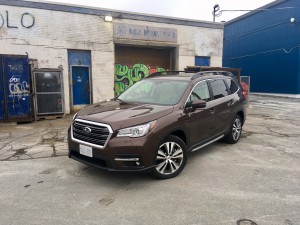 Enter the Subaru Ascent – the brand’s biggest ever SUV, though it’s not its first stab at a three-row SUV. The Tribeca (formerly known as the B9 Tribeca…for some reason) had a go of it back in 2005 and let’s just say, it never really became mainstream (which is a polite way of putting it).

So, that meant if Subaru was going to invest its money into the segment again, it had to be better than good. It had to be damned near perfect.

Subaru Canada was kind enough to send one my way for a week to evaluate its efforts. 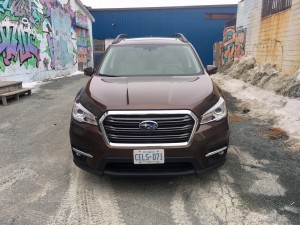 On styling, Subaru didn’t take too many chances. It’s somewhat conservative all-around, but still comes off as a handsome design, all while retaining familiar Subaru cues such as the grille and headlights. Walk around to the side of the vehicle and this is where you get an idea of just how big it is. It’s quite long – longer than some of its competitors. Consider that foreshadowing of the next paragraph.  Nice looking tail lights and 20-inch wheels help complete the look. There’s bits of chrome here and there to make the design pop a bit more and, if you’re into the sort of thing, the top of the line Premier model adds even more chrome bits. 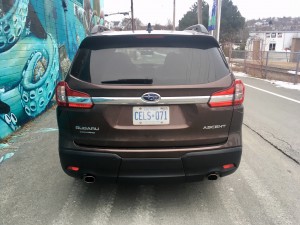 Getting into the Ascent is easy thanks to a low step in height and doors (both front and rear) that swing wide, leaving you and your frame all the space it needs and more to get yourself inside. And once you’re inside, as alluded to, you’ll be treated with heaps of space. The captain’s chairs in the second row are quite comfy, but it should be noted that the Ascent can be equipped with a second row bench seat instead, transforming the Ascent from a seven seater to an eight seater. 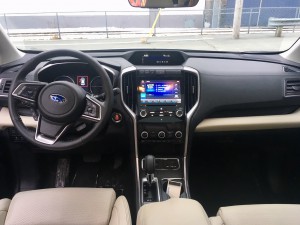 The third row seats, as is the case with most third row seats in SUVs, are a bit of a tight squeeze for adults. Most adults would be fine for shorter trips though, and gaining access to the third row is generally accomplished with ease. 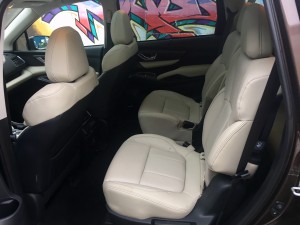 Cargo room is in abundance. There’s a nice wide opening for all your stuff, though the load floor itself is on the higher side. With that said, if you fold all rows down, the argument for the need of a pick-up truck suddenly becomes more hazy. Seriously, the space is absolutely cavernous with both rows folded. 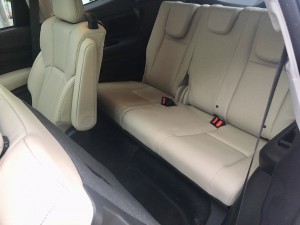 The interior design itself is pleasant both to the eye and to the touch. It feels upscale for a Subaru, which is good considering the Ascent’s price tag. I’m glad Subaru paid special attention to this area. My fiancee spoke highly of the cabin design calling it simple, yet eye-catching. The infotainment does the job, though using the touch screen leaves enough finger prints to make a forensics technician drool. The system is fairly responsive, though I wish the layout was a little clearer. 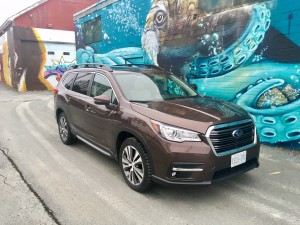 I’d be remiss if I didn’t mention the cupholders, only because there are literally 19 of them. Yes, 19. And yes, I counted. Even in a situation where an eight-passenger Ascent was fully occupied and all passengers had two drinks each for some reason, there would still be one cupholder free. That’s impressive. But since such a situation seems unlikely, the excess cupholders are best used as storage cubbies. 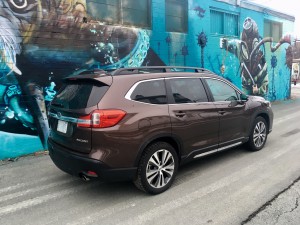 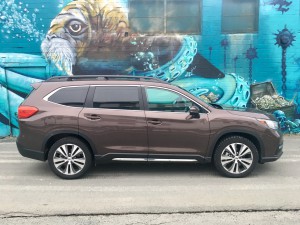 If you are an avid reader of CarDriven.ca (if you are, thanks for the support!), you’ll know that this author and CVTs pair together just about as nicely as smoked mackerel and vanilla ice cream. However, I reluctantly admit that CVTs of today are much improved from when they were first introduced, and the CVT in the new Ascent is a good example of that. It largely stays out of the way for normal driving, offering a quite and smooth experience. When pushed, it does become noticeably noisier in the cabin. More sound deadening or further refinement of the transmission is all that’s needed to combat that. Still, the CVT, whose entire reason for being is to ensure you don’t use more fuel than you have to, let’s power loose when directed to. It even has preset gears dialled in, with the ability to cycle through them manually through paddle shifters. I found myself using this feature more than I expected as it felt as if I gained greater control over this huge beast. 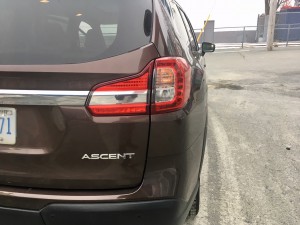 I should note that this transmission didn’t seem to like the cold very much. This is an area where the transmission and I found some common ground, but it was quite noticeable from start up. After a couple minutes of driving, the CVT quieted down.

But whatever your thoughts on the transmission, power is generally on tap when you want it, and the Ascent rarely – if ever – felt underpowered. For the record, the Ascent is capable of towing up to 5,000 pounds. 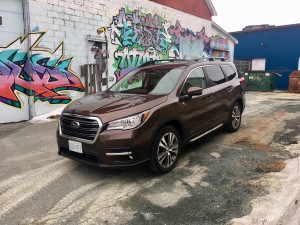 Ride comfort is another forte of this vehicle. The suspension is set up to coddle, so don’t expect any Porsche Cayenne-like handling abilities. That’s not to say the Ascent is a wobbly mess in the bends, just that it prefers you to go buy a WRX instead if that’s your jam. The end result is a smooth-as-silk ride that offers comforts levels that are honestly a bit unexpected in a Subaru. This is a good thing. 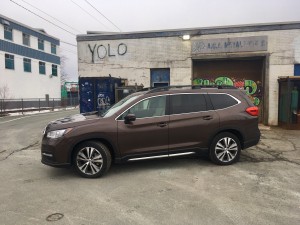 Another good thing is that all-wheel drive system which, as predicted, handled a Nova Scotia snow storm with relative ease. If you are unfamiliar with a typical Nova Scotia storm, it typically involves mass amounts of snow, followed by mass amounts of ice pellets, followed by mass amounts of freezing rain, followed by mass amounts of rain, with consistently high winds (why do I live here again?). The only time it got out of sorts was when I first ventured out into the storm and was a bit too cocky – forgetting that while the Ascent has a great all-wheel drive system with good winter tires, its mass and weight still needed to be taken into consideration. It understeered significantly into the first corner I took. I was able to come out of the slide quite easily, but remember, no matter how good an all-wheel drive system is and how good the tires are, it’s all relative to how big and heavy the vehicle is. As such, your driving style must be adjusted accordingly. Having compensated for that after my close encounter with the curb, the Ascent went on to be a bonafide storm champ. 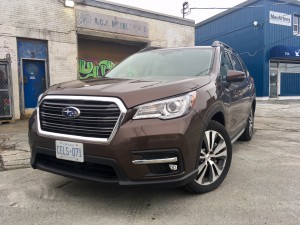 Official fuel consumption ratings come in at 11.6 L/100 kms and 9.0 city. After a week of mixed city-highway driving, my real world consumption figures came in at a rather disappointing 15.2. In fairness, all vehicles tend to perform poorly in winter due to the frigid temperatures and increased likelihood of losing traction in the ice and snow. But even with those things factored in, I still would have expected better. I expect it would do much better in the other three seasons however.

Regardless, Subaru’s first legitimate contender in this recently revived segment is a clear winner. It offers a great all-wheel drive system, above average comfort and quality, good power, and heaps of space and versatility. It also has a bunch of active safety features available depending on the model you choose. It’s quite good, and I have half a mind to let my friend of a friend know that not only has Subaru has finally addressed his concerns, they’ve gone and done it properly.