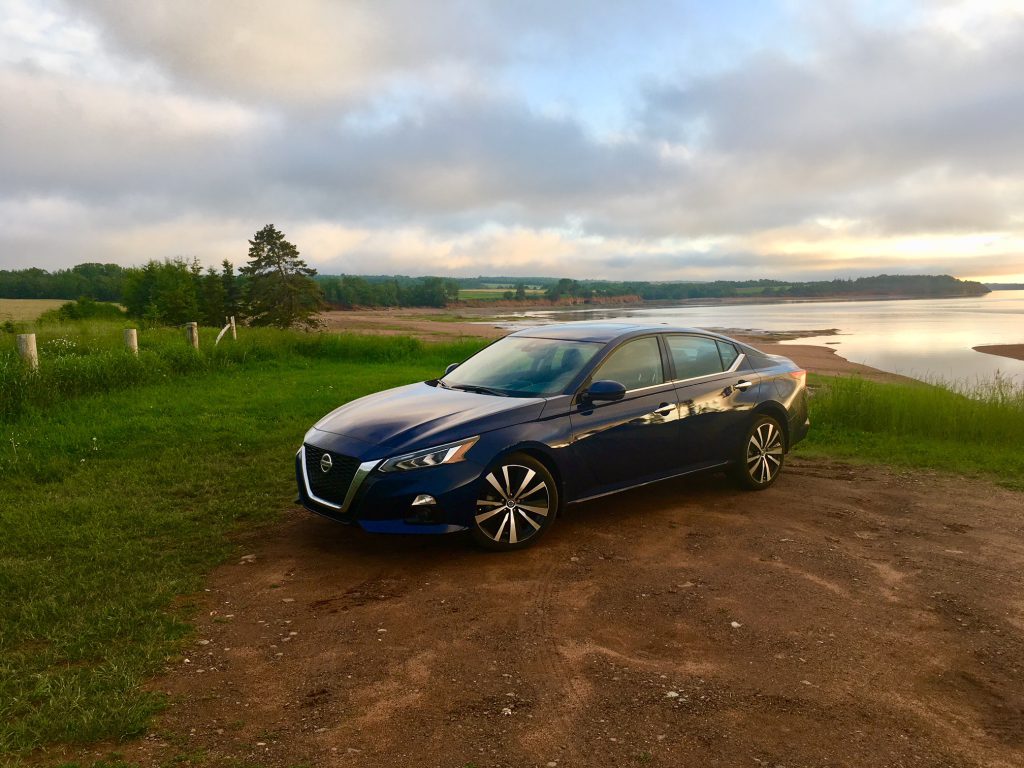 While I am certainly not a market analyst, I still find
myself questioning the recent move by Ford and GM to ax selected passenger cars
in their lineups. In Ford’s case, every single traditional car will be removed
from the North American line-up, save for the Mustang. Apparently we are all so
gaga over SUVs and crossovers that the traditional passenger car isn’t needed
anymore.

They may be right about that. However, to me, getting rid of
the Fiesta and bringing in the Ecosport as a replacement is a little too easy
and indeed short sighted. Markets can change quicker than a beautiful summer’s
day in Nova Scotia. Remember when gas prices made SUVs so unaffordable that
dealerships couldn’t even give them away?

So rather than just giving up on the traditional car
altogether, why don’t automakers challenge themselves to make the traditional
car more appealing?

Enter the new Nissan Altima. It is completely redesigned and adds in lots of interesting features to make it appealing to the buyer who lusts over an SUV.

People tend to flock to SUVs for numerous reasons and one of the main ones is status. People think that SUVs indicate some level of success. After all, a Fiesta is the cheapest model in the lineup and can be had for $15,000, but an SUV – regardless of make or trim level – will cost you somewhere in the low to mid $20,000 range to start.

People also like the idea of having an outdoorsy lifestyle, even though reality indicates the craziest elements most SUVs will have to deal with on a regular basis is a grocery store parking lot or fast food drive-thru. People like living in this sort of fantasy world.

So, what did Nissan do with the Altima’s design? To my mind they took the same idea of making people think they live a different sort of life than they actually do. Except instead of making it seem like you go on safari on the regular, they sort of made it seem like buyers are the types who wear custom made suits even when they don’t have to. It is lower, wider and meaner looking. It has a type of aggression that is enough to be eye-catching, but not intimidating.

This is the best incarnation of Nissan’s V-motion grille design.  It is imposing, classy and aggressive all at the same time. The side profile is helped out nicely thanks to those very attractive 19-inch wheels available on the Platinum trim, along with splashes of chrome and a floating roof design. It all helps to make others think your night job is a fine food critic. The only part of the design where the Altima loses it for me is in the rear. Nothing interesting going on there besides a lip spoiler. And I’m sorry, when you can get all LED lighting as standard on a Toyota Corolla these days, why is none available on the much more expensive Altima? Yes, LED headlights are standard, but halogen only bulbs in the rear exudes cheapness and does not fit with the rest of the design.

And speaking of cheap, let’s venture on to the interior because that faux-wood trim is among some of the worst I’ve seen in a long time, especially when its implementation shows unequal gaps between the panels. But that’s probably the worst offense. Everything else feels decent to the touch. The one thing everyone noticed as soon as they sat down were the zero gravity seats – a technology co-developed between Nissan and NASA. You can’t find more comfortable seats in this segment, or indeed in this price point. But overall, the interior look is a bit underwhelming considering the exterior style suggests this vehicle is more expensive than it actually is.

That might be a good thing if you’re the type that prefers simplicity. This is one of those cars where you can give literally anyone with a license the key and they could set off within seconds. There’s a traditional gear lever, for instance – quite refreshing. There’s volume and tuning knobs. There’s hard buttons for the climate control. There’s a traditional speedometer and tachometer. It’s quite easy to get settled in and acquainted.

That doesn’t mean that the Altima isn’t forward thinking. It has a lot of tech packed in such as all the active safety features including adaptive cruise control, lane departure and collision warning and autonomous steering. The best part is all of this can be activated by a blue button on the steering wheel. I like that. The only part I don’t like is when you activate it, whatever content you originally had displayed between the gauges is now gone and you have to go cycling through to find it again every single time you activate the active safety system. Regardless, if you’ve never driven a vehicle with this sort of tech, don’t get too anxious about it. It’s very easy to get used to.

The infotainment is also straight forward with nice clear fonts and usability. The display is customizable to your liking or, if you prefer, Apple Carplay or Android Auto can take over and be used by voice command.

One thing I love about most Nissan product is the 360 around view system, which makes reversing into a spot, or parallel parking much easier. My only gripe is that the camera display itself isn’t very nice to look at. It’s almost as if Nissan went with only the minimal number of pixels required to be considered adequate.

But let’s get back to those pesky SUVs because one of the main reasons someone might opt for one over a traditional passenger car is the interior space and cargo room. There’s no denying the advantage to the SUV for this one thanks to its two-box design, but the interior of the Altima could hardly be described as cramped either. Leg, knee and headroom are all plentiful and I was able to comfortable sit behind the driver’s seat set for my preferred position. There’s 15.4 cubic space of cargo room available (with fold down seats) which is more than adequate for most. One sticking point is the exposed hinges that have the potential to crush any delicate items once the trunk is closed. But the point is, no one should really feel as if the Altima isn’t roomy enough either for people or cargo.

Powering the Altima is a 2.5 litre naturally aspirated 4-cylinder which produces 182 horsepower and 178 pound feet torque. Being a Nissan, you better believe the transmission is a CVT. Though as far as CVTs go, this one largely stays out of the way at lower speeds. As far as power goes, it’s fine. You won’t be winning any drag races but it is certainly adequate for every day driving. Our American friends (can we even call them friends at the moment?) are lucky in that there is another power option available; a 2.0 turbocharged (a variable compression turbo too) 4-cylinder which makes 248 horsepower and 236 pound feet torque. Why we do not get this engine option when most of the Altima’s rivals offer optional engines with similar power figures is beyond me. However, the engine and transmission in the 2.5 work well together and are both relatively quiet in their operation. It isn’t until you plant your right foot down when you’ll really notice any engine noise into the cabin.

Now, let’s talk about the Altima’s main feature that will ultimately take the biggest advantage away from SUVs: all-wheel drive (AWD). This is such a clever move on Nissan’s part and it’s not even optional. That’s right, in Canada, all of our Altimas have AWD standard regardless of trim. This not only puts the Altima on more equal footing when compared to SUVs, but it also gives it an advantage over its immediate competition. The only other player in the segment with standard AWD is the Subaru Legacy, which I coincidentally received as a rental during the same week I had the Altima and I’ll touch a bit on that in a moment.

It should be noted though that Subaru’s AWD system operates differently than Nissan’s. In the Subie, power is sent 50-50 to all for wheels continuously. In the Altima, the front wheels are powered until slippage is detected. That’s when the rear wheels become powered for added traction.

When I first picked up the Altima, I took it on a trip to Bridgewater, Nova Scotia which is approximately a 115 kilometre drive. It averaged 6.2 L/100 kms for that trip. When I rented the Subaru Legacy, I took it for a drive to Truro, Nova Scotia, which is approximately 100 kilometre trip and it managed to be a full litre per 100 kms thirstier than the Altima. That makes sense since the wheels are constantly being powered, but regardless, that is a seriously impressive figure for the Altima. During the end of the week, my average was a mere 6.8 L/100 kms. The Altima doesn’t have any eco modes or engine start/stop etc. There’s no way of putting it, the Altima is a fuel miser, seemingly without trying too hard.

And the Altima itself doesn’t really need to try too hard when it comes to competing with SUVs. It’s very styling, has lots of interior space, is seriously good on gas, has lots of standard tech and, crucially, has all-wheel drive now too. Why would you get an SUV – something everyone has – when the Altima does it all in a sleeker and more confident package?