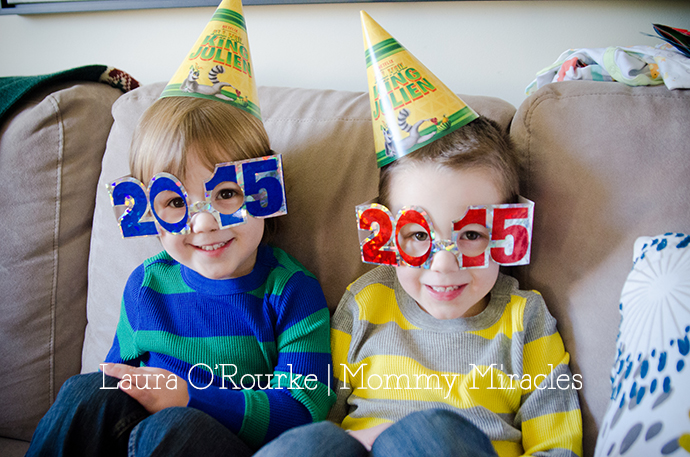 It took me a while to adjust to New Year’s Eve with kids. Not only did we have kids, but all of our friends had kids too.

And if you don’t know it before you have kids, you certainly do know it afterwards – with kids, routine is the most important thing. If your kid isn’t used to staying up until midnight/sleeping at a strange place/staying asleep with noise then there is no way you want to take them out of their environment for the sake of a party. And all your friends feel the same way.

Sure, babysitters are an option… an option that makes a likely expensive night much more expensive. And let’s be real. At a certain point in parenting, you realize that you just don’t have the energy to party to midnight and beyond. Or maybe that’s just me. I am pregnant.

According to research conducted by Netflix, 87 percent of parents are planning to stay home with their kids on New Year’s Eve. And while we were invited out to a kid-friendly fun night with friends, we have decided to be part of that 87 percent. Because – as I said before – I don’t really want to venture too far away from my bed as midnight approaches at 38 weeks pregnant. Maybe next year.

During years gone by, we haven’t done big New Year’s celebrations with my kids. My husband and I have watched a movie in the Lord of the Rings franchise, and last year we ordered Thai food, which is a tradition I am happy to stick with. (That is a fun story of itself. Dinner time rolled around and my husband felt like Chinese food. Somehow he has spent 33 years of his life not knowing that everyone gets Chinese food on New Year’s Eve, and you can’t really just decide to get some at dinner time.) We put the kids in bed when they were tired. We kissed at midnight and took an Instagram selfie. And then we went to bed. So fun.

This year, we’re going to try to make it a little more festive. We’re starting the day off going to the movies as a family. We’ll watch some World Juniors hockey as Canada hopefully beats USA. We’ll eat supper (Thai food again?) and put on silly glasses and hats. Then, we’ll count down to the new year. And we’ll do all of this with our fabulously fun kids.

Admittedly, I’m not keeping my under-5 kids up until midnight to do this (along with 42% of other Canadians). We’ll be ringing in the new year a little before bedtime. Luckily, it has been made easier with Netflix who has created a three minute New Year’s Eve countdown with King Julien (from the animated Netflix series “All Hail King Julien”, a spinoff from the Madagascar movies). We’ll be able to ring in the new year whenever we want to without worrying about what tomorrow will bring if two kids stay up until the real new year starts.

I’m actually kind of looking forward to this New Year celebration. I miss actually celebrating the new year instead of just watching it come in. And my kids are pretty fun people, so I am excited to celebrate today with them.

Happy New Year’s Eve! May it be fun and non-exhausting with your kids!

The post Ringing in the New Year with Kids appeared first on Mommy Miracles.

Ringing in the New Year with Kids
https://haligonia.ca/ringing-in-the-new-year-with-kids-101240/