Just in case you are wondering, I am completely rocking this exercise and calorie counting gig and it’s paying big rewards in my life. I have a few food and snack postings coming up soon that I wanted to share that I am really enjoying, so stay tuned for that. I have tried to blog at least 3094834 times in the last little while,

but was having some frustrating issues with Windows Parallels, but now I’m having some more success with Fusion so I hope this means I can pump out a blog post a little easier than waiting an hour for pages to load! No time for that in this busy Mom’s life 😉

I feel better than I have in, well, probably a year or more. I would even go so far to say a year and a half. I wasn’t a person who “loved being pregnant” so going back that far isn’t a stretch!

There are so many things in my life that are making it brighter. My son is now EIGHT months old. Can hardly believe it. He’s the single most amazing thing that has ever happened to my husband and me and he’s at an age where he’s so much fun! Just when you think that’s true, it just gets better!  We had a fun day at our friend Amy’s house celebrating some birthdays and I think it shows: 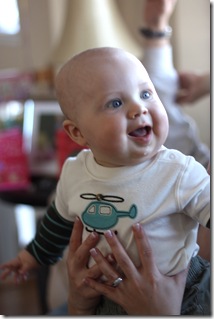 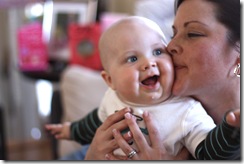 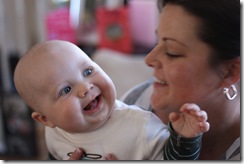 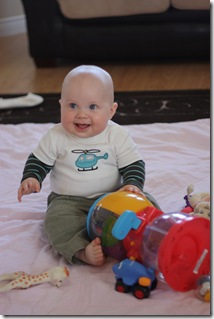 He’s on the move and exploring. He’s not quite crawling quite yet, but he’s moving backwards on his belly by pushing himself backwards with his arms. I don’t think crawling is very far away!  He’s working on tooth #4 (and maybe 5) right now and he’s taking it like a champ. I only know because I’m always inspecting the inside of his mouth when I get him laughing up a storm.  He’s become incredibly affectionate and loves hugging and kissing and laughing and babbling. His little personality is starting to really shine and watching him develop into a “little boy” before my eyes is incredible.  It’s funny how I had convinced myself I was having a girl when I was pregnant because now I cannot imagine it.  I remember in his early days I would look at him and say, “It was YOU in there all along” thinking back to when I would day dream about what s/he would look like and what it would be like to hold him/her but really having no idea what it would be like and now here he is his own little person making his mark on the world in a big big way. It was always him.

Another big light in my life currently is that my little boy is finally sleeping through the night!!!!Prolonged sleep deprivation is absolute torture and it tests you to every degree possible. But I also think that it makes it ever MORE amazing when you start to see the light at the end of the tunnel and your baby FINALLY starts to sleep through the night!!!  Of all the things you could wish for in the world, I have to say that THIS was on the top of my list.  I am hesitant to even say it for fear of it to come crashing down, but bloggies, it’s happening! At first it was a sporatic night amongst a few weeks and then it happened. He’d go to sleep at 7p.m. and not wake up until 6a.m. So this, together with being on track with my weight loss and exercise, I feel GREAT!

I can’t stress enough how much I’m loving My Fitness Pal. It’s starting to feel like the “old” WW online with the addition of “Happychix” and “Bi0nicw0man” and Krissie too!  You should join! Add me as a friend, the support and interaction is contagious and KEY!