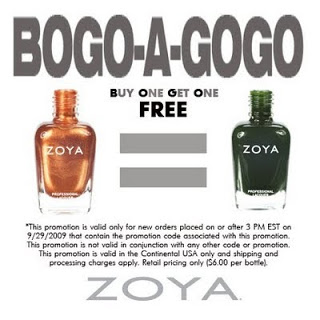 The picture pretty much says it all. Zoya’s twitter promotion: You can get a BOGO deal at Zoya (works out $3/bottle) plus S&H until midnight today.

Unfortunately, this promotion is valid within US only, despite the fact that their twitter fans come from all over the world. What a shame!

I am still waiting for the day that nail polishes could be shipped freely everywhere, no border, no limit. I have missed out Zoya’s Polish Exchange, and 2 twitter promotions already. Why is it so hard to be a polish addict?

This code was given on twitter by elf, and I don’t see any fine prints, so I gues it’s valid worldwide.

I don’t know whether it works with the Studio Line shadows though.