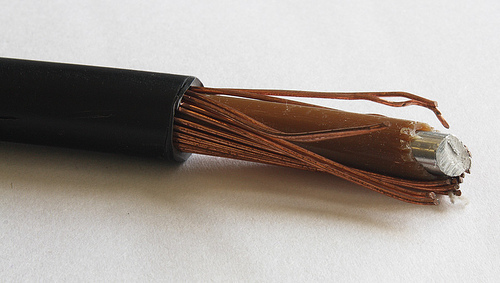 Patrol officers and investigators in the Integrated Halifax Regional Police/RCMP General Investigation Section arrested a man and woman during a traffic stop today in Halifax.
At approximately 12:15 p.m. officers stopped a vehicle near the intersection of Agricola and Young Streets in relation to an on-going investigation. A man and woman in the vehicle were arrested and brought to police headquarters for questioning in relation to the significant theft of copper from a Dartmouth business on Sunday, October 23. The vehicle was seized as police believed there may have been a firearm inside, however, a search of the vehicle failed to produce any weapons. The woman has since been released, while the man remains in police custody in relation to the theft.
Based on the investigation, the value of the copper stolen from the Dartmouth business is now estimated at a minimum of $80,000. Officers are continuing their investigation into this matter and charges are anticipated against the 43-year-old Halifax man who was arrested today during the traffic stop.
Another man, 22-year-old Joseph Wayne Bowser of Dartmouth, appeared in Dartmouth Provincial Court yesterday to face charges of break and enter and possession of goods obtained by crime exceeding $5000 in relation to this matter.
Source: Release