At approximately 9:40 pm Halifax Regional Police responded to the area of Dorothea Dr and Topsail Blvd in Dartmouth in relation to a suspicious circumstances complaint.  A citizen reported that he was driving along Dorothea Drive when a group of four or five people were standing in the roadway, causing him to slow down.  As the vehicle slowed, the group ran toward his car and one man grabbed toward his waistband, the driver reversed his car and fled the area.  One of the suspects is described as being a bi-racial man wearing a black hooded sweatshirt with white lettering on the front.  This man had his hood up and also had a green bandana or scarf covering his face. The other males were described as wearing hooded sweatshirts with their hoods up.

At approximately 9:53 pm Halifax Regional Police responded to the 0-100 block of Cross Rd in Dartmouth where a citizen reported that  two men forced open a door and assaulted an 83 year old man, knocking him to the floor.  The suspects were not known to the victim.  The suspects fled the scene quickly and the man does not believe that anything was taken from him during this assault. 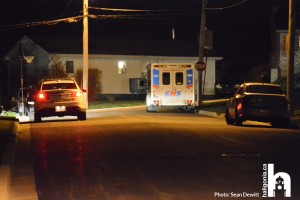 At approximately 9:54 pm Halifax Regional Police responded to the 0-100 block of Dorothea Dr in Dartmouth to a report of an assault that had just occurred.  A  23 year old man reported that he had arrived home and was entering his residence when two men, that were not known to him, approached and punched him knocking him to the ground.  They continued to assault him until a family member scared them off.  The suspects were described as: one white man and one black man, both approximately 26 years of age, both had hoods up, and one had a backpack on.  The victim does not believe that anything was taken from him during the assault. 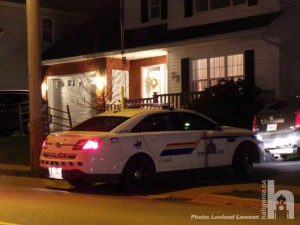 At approximately 10:04 pm Halifax Regional Police responded to the 0-100 block of Carlson Ct in Dartmouth to a report of an attempted break and enter.  A citizen reported to HRP that two men had attempted to kick in the front door of a residence before fleeing on foot.  One of the suspects was described as being a light skinned bi-racial man in his early 20’s, wearing a black sweatshirt with white writing on it.

Several HRP and Cole Harbour RCMP patrol members responded to the area in an attempt to locate the suspects.  A police K9 team conducted a search of the area and arrested 2 people in the 300 block of Poplar Drive, Cole Harbour.  A 16 year old boy and a 15 year old girl were arrested and are currently being interviewed by members of the Integrated Criminal Investigation Division.  The investigation is ongoing and is in the early stages at this time.  These incidents occurred within close proximity to one another and the Halifax Regional Police believe that they are related.

Investigators are looking to speak with anyone who may have any knowledge of these incidents and ask that they contact Halifax Regional Police at 902-490-5020. Anonymous tips can be sent to Crime Stoppers by calling toll-free 1-800-222-TIPS (8477), submitting a secure web tip at www.crimestoppers.ns.ca or texting a tip – Tip 202 + your message to 274637.