Amanda: Las Vegas may be the city of lights, the city of sin, and one of the best food destinations in North America (New York beats it, but in Vegas, you don’t have to go trekking over five boroughs), but in my heart, it will always be the city of shoes.  This was my third trip to the strip, and as usual it and the shoe scene did not disappoint.

Upon arriving and unpacking, my husband CL exclaimed “you brought eight pairs of shoes on vacation!”  But more on that later.

In Las Vegas, fashion is as hot as the pavement in July.  Sure, the likelihood of you ever again running into the sophisticated, well dressed, yet staggering tall dark and handsome man that you literally run into as you peal yourself away from the window of Chanel’s boutique, is slim.  But be sure that he and his 6’4” bombshell girlfriend are judging you.  There aren’t enough yard-long margaritas on the strip to not feel it.  And yes, there are some of those drinks that come with a neck brace.

This summer, wedges, chunky heels and platform espadrilles rule the strip.  Providing a hint of comfort with a wallop of style, and the often-needed height boost so that you don’t have to get your pants hemmed, look for these styles to bring-it Vegas style in Hali.  The more colourful the better.  Alternatively, choose a neutral or metallic tone to complement your coloured jeans – that way when the fluorescent-pink skinny jeans that you bought go out of style, you’ll still have the shoes to remember the summer of 2012.

Every designer you can imagine is doing it, so you should too.  Here are just a few samples: 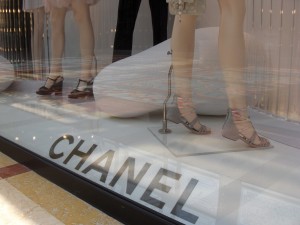 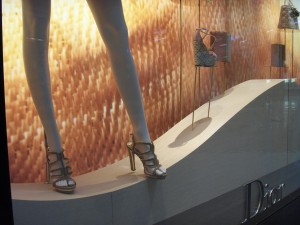 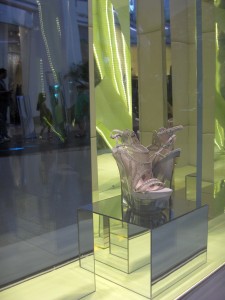 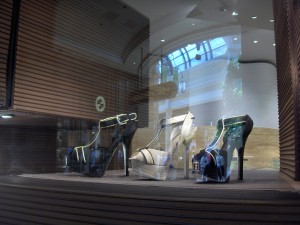 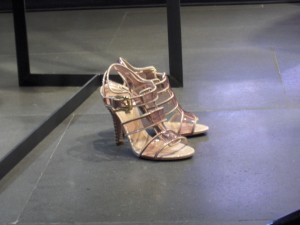 Now, the exception of course is Christian Louboutin.  I don’t know about you, but I certainly didn’t want this store to show me anything I had seen before, and the red-soled pieces of art did not stray from the visions in my dreams.  Yes, Louboutin has a whole store directly across from Jimmy Choo at the Forum Shops at Caesars Palace.  Upon approaching this magical realm, CL knew it would take a while to traverse the store-front length of the mall.  Every shoe on display had to be viewed.  Here are the pics of the store-fronts. In case you didn’t already guess it, that’s me in front of Louboutin, popping my leg for an attempted modelesque pose… while wearing my Adidas.  I think the smile says it all. 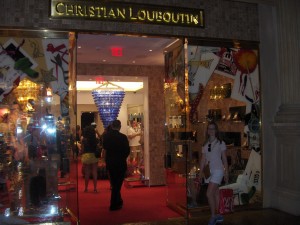 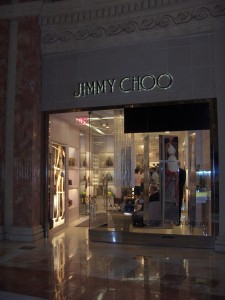 And here is a sample of the wears. 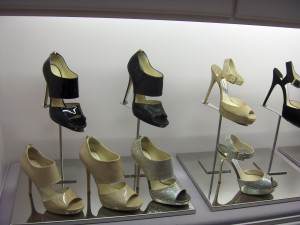 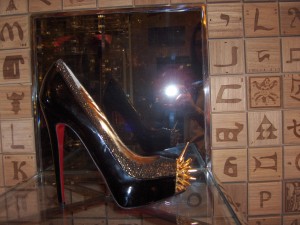 The kind security guard at Louboutin gently informed me (after seeing the flash on my camera) that photos were not permitted in the store.  With the fear that he would make me delete the photo, I threw my camera in my Coca-Cola store bag quicker than I could flip my wrist and utter, “Oh.  My apologies.  They are just so stunning.”

Now that I saw how the other side adorned their tootsies, I was determined to find a pair to call my own.  Nothing mundane, or practical would suffice.  Just then, we walked into the Ted Baker store.  And I saw them.  It was truly love at first sight.  They glowed.  They sparkled.  They spoke to me in a way no shoe has done before.  They were 30% off, and were the last pair in my size.  Just like the day I met CL (except for the 30% off part), I knew these shoes were coming home with me.

In order to get a good shot for this post, I had to turn the flash off on my camera – so when I say they sparkle, they really sparkle.  The look on my face must have been determined as when I slipped them on, CL did not ask whether I needed them, or how often I would wear them.  He simply indicated where he would be while I paid for them… and that he would like to have lunch at the Carnegie Deli at the Mirage.  On a red sequined shoe-shaped cloud, I had no problem eating my weight in pastrami for lunch that day. 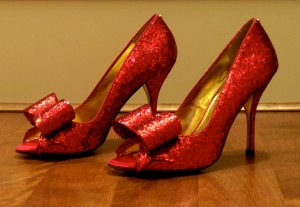 Now back to the eight pairs of shoes I brought on vacation.  In my defence, only one pair were ridiculous – the pair I wore as we renewed our vows at the Graceland Chapel.  Other than the shoe shopping, our first-year-anniversary vow-renewal was the highlight of the trip for me.  CL is still mortified I’m sure – but it was my dream wedding.

Having been to Las Vegas before, I knew there would be a lot of walking.  Quite frankly, there is just too much to see.  Casino after casino is a euphoric theme that rightly makes you think that you’re in an adult theme park.  You need to see every bit of it.  Breathe in the softly scented air that is different in every Casino.  Note the themed costumes of the drink and cigarette waitresses.  Loose track of time while you lay your money down in an attempt to win more in order to buy shoes…

From the Hyde Bar in the Bellagio where you can watch the fountain show from a behind-the-scenes vantage point (while enjoying a liquid nitrogen formed alcoholic slushy that the waitress in four-inch heels makes tableside) to the Tropicana where Jenny will deal you a good hand, and you notice the dancers from Dancing with the Stars meandering about (a highlight of the trip was playing Black Jack one table over from Joey Fatone of ‘N Sync – heart melted), to the new City Centre development where there is a bar in the new ultra-chic Cosmopolitan hotel where you sit in a three-storied bar amidst a giant crystal chandelier.

And this time, I was ready for what Vegas had to throw at me.  From sneakers to metallic flats, to snakeskin sandals and Clark’s sandal/sneaker hybrids, I was ready for Vegas and had a comfortable shoe to match every scandalous cocktail dress I packed.  CL was actually impressed once he realized that I had such practical sense after the trip in 2009.  That trip saw more bandages on my feet than “working girls” fleeing their nights’ work through Vegas casinos at 9 am on a Monday.  But I digress.

As much as you want to wear four-inch heels and strappy stilettos, it’s just not practical in the town of walking.  With this season’s leading shoe trends in Vegas, style definitely meets ability to hoof it from the MGM Grand to the Venetian and back.  You will be comfortable.  The big guy dressed in drag across from the Denny’s waiting for tourists to pose with him for a $5 picture, not so much.