This is a brief message from your friendly neighbourhood movie geek: GO SEE PONTYPOOL! 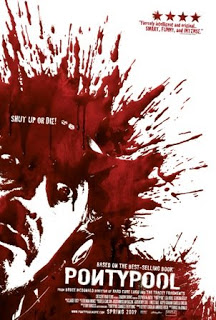 It is so rare to come across movie that I believe will satisfy so many different age groups and different types of film fans. I am hesitant to call this a horror movie… I would rather lay it somewhere between suspense and drama, with elements of the horror genre thrown in. Unlike most scary movies, the acting chops of the lead actor are extremely formidable. I found myself being almost hypnotized by his voice, and became frightened when he was frightened, laughed when he laughed.

Pontypool is rolled out like a radio play, with emphasis on the audience using their minds to imagine the situations that are being described. This is a movie about “zombies” (sort of), but blood and gore do not really come into play that often. For the majority of the film, the “zombies” only appear in your mind as you must picture what the radio host is describing without any visual cue. Another word I would use to describe this movie is “smart”… it comes off as an intelligent film, and relies on the minds of its audience members to actively participate in the movie.

This is a Canadian movie directed by Bruce McDonald. If more movies like this come out of Canada, the impact would be phenomenal. The fact that it is such a solid film that was filmed on a comparatively TINY budget over only three days speaks volumes to the talent of those involved.

There are some plot holes, and the sometimes too thorough explanation of the zombie phenomena left me scratching my head, but I still appreciate the idea behind the movie and the execution of it, especially through the lead actor’s talents.

If you like well-written, wonderfully acted, and thoughtfully directed movies, definitely check this out. It is a scary movie for people who don’t typically like scary movies—but don’t worry, horror nuts will like it, too.

The fact that it is Canadian is another reason to go see it. So many great movies are made by Canadians, and most simply don’t make it into theatres. Support Canadian film and show the movie industry that we do want to see movies made by us, filmed in our towns, and telling our stories.

Pontypool is currently playing at the Oxford Theatre in Halifax. Showtimes can be seen on the Empire Theatres website.