After baking the apple pies from my gigantic bag of apples, there were still many many leftover apples all peeled and sliced, but a girl can only have so many apple pies lying around, right?  I decided to freeze then and figure out what to do with them later.  Then Lynn posted about how she made applesauce in her slow cooker.  Perfect!  So last night, I decided I would take advantage of the two compartments that go along with my slow cooker and make one half of the batch sweetened (with agave nectar) and the other half unsweetened.  All I added to the apples was a very generous amount of cinnamon, splash of vanilla and splash of water (and the agave to one half), stirred it all around and set it on low overnight and voila: 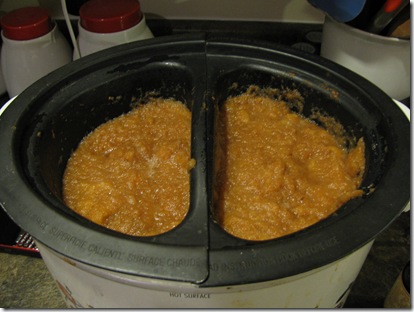 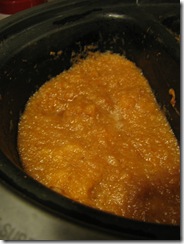 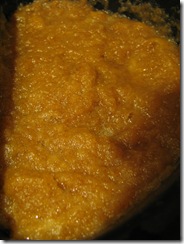 I cannot believe I haven’t made my own apple sauce before now!  I have a ton of mason jars, so I’m going to sterilize a few and save a few jars of this stuff for later!

It was a wonderful Monday over all.  I’ve been doing really well getting back into exercise with my Nubody’s membership AND the fact that I went out and RAN outside yesterday and loved every minute.  I did two laps around the loop around my house.  The loop is around 2.4kms, so I did one loop with Lucy, dropped her off and ran the second one by myself.  The second lap went MUCH more smoothly when you’re not trying to control a very curious and vocal pup!  All in all it felt great to be out running again and I was actually still feeling the positive effect for most of the day today too.  I got home from work, geared up Lucy and off we went.  But OMG the wind was so COLD!  I felt like after just one lap I couldn’t do another one because I felt like I caught a “chill.”  I’m tellin’ ya the wind was COLD!

So I decided to call upon my Steeped tea friends and enjoyed a hot steamy mug of Creme Carmello with a piece of dark chocolate: 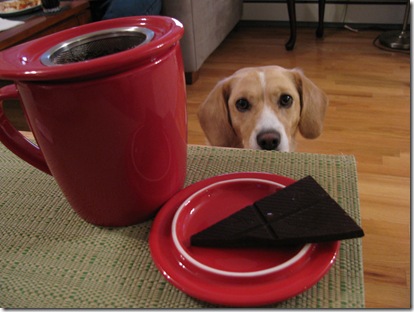 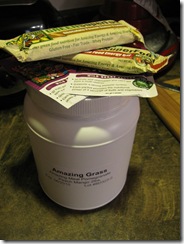 Grass Pom Mango Infusion Amazing Meal was delivered (with a few extra little Amazing Grass goodies) compliments of Amazing Grass?!  They were good enough to make up for the mix up that I had in paying the importing fees when I received the free samples for the blog to review.  I was really happy because I absolutely love their products.

(Although I have to admit I am not a fan of the Regular or the Berry energy bars, but the Chocolate and the Chocolate Peanut Butter ones aren’t too bad)

I told Lucy that I could beat her in a race and here’s what she said: 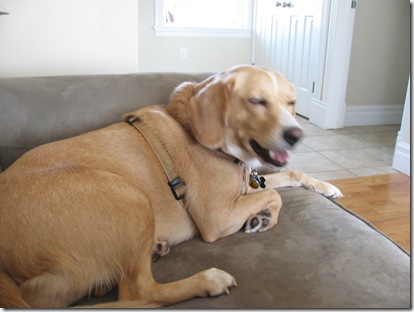