It’s Muffin Monday, friends!
Last week I was among bloggers baking from Canada, the Dominican Republic, India, Japan, Macedonia, and the United States. What a pleasure it was and is to interact with people around the world and

across cultures who share similar passions, but who I might not have encountered any other way! Muffin Monday is now in its tenth week, though only the second I’ve participated in, and I look forward to seeing what Anuradha has in store for us in the coming weeks and months.

After reading some of the other Muffin Monday posts from last week, as well as a few other unrelated posts (I’m looking at you, Nelly, with your healthy Carrot Cake Muffins!), I was really envious of some people’s ability to look at a recipe – that is by all accounts calorie-laden and unhealthy – and give it a healthier twist. I seem incapable of this. This week, for example, I wanted nothing more than to slather vanilla or chocolate icing on these, but I refrained in the interest of keeping with the muffin (and not cupcake) theme. In retrospect, I should have just gone for it! I also thought about adding cream cheese to them, to make them even more rich. What’s wrong with me? I see an already unhealthy recipe and think of ways to make it worse. In the end, I simply stuck to the recipe, with only one small deviation that I’ve detailed below.
(But seriously, what do you think about the addition of cream cheese? And in what amount?) 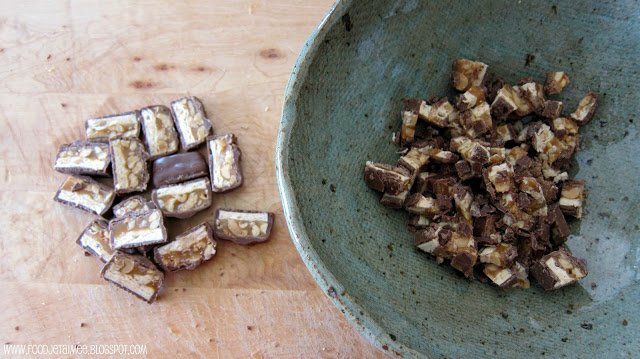 This week’s muffin, the Snickers & Peanut Butter Muffin, was a piece of cake to make. All of the ingredients fit onto my cutting board with room to spare! I only had my jumbo pans this week, however, so I stuck to making one batch (i.e., 6 muffins), meaning 50% of these muffins went straight to my hips. Must invest in more medium sized pans! Also, I didn’t use muffin cups because I’m really starting to like my muffins with a crust on the outside.

Preheat the oven to 400ºF. Stir together flour, sugar, baking powder and salt. Add the peanut butter and mix. Add the melted butter and egg to the milk, and then stir this into the bowl. Mix in the Snickers pieces and spoon into the muffin cups. Bake for 20 to 25 minutes, or until the muffins are fluffy and golden. Let them cool on a wire rack.

While making these muffins, I was worried about the peanut butter making them too dry, so I added 1/4 of yogurt to the batter, which I think was a good move; as a finished product, these were just moist enough for my liking. I then decided to put some of the bigger Snickers chunks on the top of the muffins, not realizing they’d turn so dark while baking. I knew they’d melt, of course, but I also didn’t think they’d spread that far. While not so pretty to look at that, they actually tasted great! The dark brown bits on the top were chewy and caramelized, while the nuts became toasted and crunchy. They also aren’t nearly as sweet as they sound by the recipe, which is either a good thing or bad thing, depending on what you’re looking for from these muffins.

Make sure you drop by Baker Street to check out this week’s Muffin Monday line up, which showcases a whole slew of wonderful food bloggers from around the world and their take on the Snickers &Peanut Butter Muffin!

Muffin Monday is an initiative by Baker Street. A culinary journey of sharing a wickedly delicious muffin recipe every week. Drop in a quick line to join her on her journey to make the world smile and beat glum Monday mornings week after week.