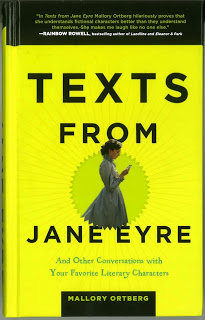 What I thought was going a be a gimmicky fun read to enjoy on a weekend afternoon, actually turned into something, while still amusing and engaging, which actually packed more of punch than I expected. Texts From Jane Eyre by Mallory Ortberg is an irreverent skewering of classic scenes from revered works of literature in the form of text messages.

In an interview in NPR, “The project came about when a friend who’d relocated to the South told Ortberg it was like living in Gone with the Wind, but with cellphones. “I just immediately thought, ‘Oh, God, Scarlett O’Hara with a cellphone would be horrifying,’ ” Ortberg says, clearly as amused as she was horrified. “And it was something that actually ended up in the book.””

Telling the stories in the form of text messages strips away the layers and reveals the absurdity in an imagined conversation between between Emily Dickinson and a friend.

Dickinson: I saw – Today – a Cricket man
Friend:  okay
Dickinson: he did not stop to chat
Friend: is that it –  did anything else happen
Dickinson: No –
Friend: let’s go out tonight okay – we don’t have to do anything big but I think we should go out just for dinner or something – I think it would be a good idea
Dickinson: Go out, Again? – I went Out to Mount Holyoke
Friend: for college – you went there for college thirteen years ago
Dickinson: And now I must rest

Ortberg’s blog The Toast is most entertaining and informative with funny and thoughful posts about books, feminism, and, of course, more Texts From.