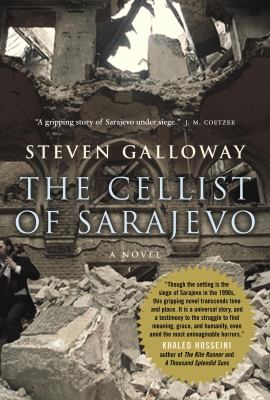 The Cellist of Sarajevo by Steven Galloway.
Galloway addresses the question,”How does war affect ordinary people? “. The Siege of Sarajevo lasted four long years killing nearly 10 000 people. Galloway was inspired by Vedran Smailovic, a cellist in the Sarajevo Philharmonic Orchestra, who played his cello in acknowledgment of twenty two people who were killed while waiting for bread.
The cellist was actually a minor character is this novel. His actions, his twenty two days of performing, linked the stories of the three main characters involved. Kenan is a family man who makes the perilous journey to fetch water for his family. Dragan works at a bakery and his family has fled the city. Finally, there is Arrow, a girl who excelled at target shooting and who unwilling became a soldier and a sniper.

There are no labels to define nationalities. There is the we/us in the city and “the men on the hills” who shoot us. No one seems to understand why this is happening. Everyone’s lives have been ripped away. When society falls apart how do we act? Kenan stays focused on the future. As he trudges home under his burden, narrowly missing the snipers bullets, he thinks about his children and how their family life will be different – going out for ice cream and counselling his daughter about the dangers of boys. Dragan looks to the past. He remembers what life was like and does not want the world to see his city like this. And Arrow, Arrow is the grim reality of the present.

Yann Martel has been sending Stephen Harper books. Reflecting on stillness, Martel concluded that in order to read we must be still and in order to reflect upon life we must be still. Watching Prime Minister Harper’s busyness he vowed to send him books that have been “known to expand stillness” The Cellist of Sarajevo was number 21. 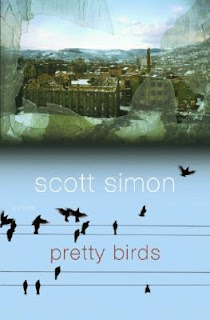 I came across another book that seems to have some similarity to The Cellist of Sarajevo. Pretty Birds by Scott Simon tells the story of Irena Zaric, a spirited teenager who has all the usual celebrity crushes and enthusiasm for basketball. Her girlhood is abruptly brought to an end by this war. Her new life as a sniper strikes a chord with readers as we feel for her (as we did for Arrow’s) loss of innocence.

A review for The Cellist on the CBC website referred to the book as “Book Club Catnip”. I certainly understand what they meant. There are plenty of issues to address. Appropriately, the Spring Garden Road Library book club will be reading this book in September. Details are found in the Library Guide or on the website.

Staff Picks - The Cellist of Sarajevo by Steven Galloway
https://haligonia.ca/staff-picks-the-cellist-of-sarajevo-by-steven-galloway-5050/