For most of us, it takes time and distance to appreciate our parents as individuals and to understand their marriage or relationship as something separate from their children. Judy Fong Bates in The Year of Finding Memory must travel a world and a lifetime away to begin to piece together her parents’ troubled marriage. Bates immigrated to Canada in the 1950s with her mother. They joined her father who had a hand laundry in a series of small Ontario towns. They worked unbelievably hard to provide themselves with a bare existence living and support their family left behind in China. 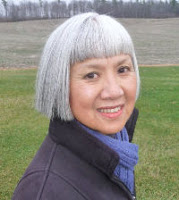 Bates, a small girl upon arriving in Canada, quickly absorbed the language and became the point of contact and the translator for the family. She was removed from her culture. Her parents were her only reference point. She lacked the context she might have found had they settled in a large city with an immigrant community. She only knew that they were different and that her parents were unhappy.

Follow the deaths of both her parents – her father by suicide and her mother dementia – Bates, her husband and assorted family members traveled to China to visit her parents’ villages. This journey became a pilgrimage of sorts affording Bates with the opportunity to understand the dramatic events and choices that coloured her parents’ lives. As poor as her family was in Canada, it didn’t compare to the poverty her Chinese family faced. Her parents, who seemed so small to her, were heroes in their homeland for their generosity.

Growing up, Bates learned of her family’s history in snippets, only half listening as children tend to do. Over the course of her visit to China, her Chinese family completed the picture and revealed the secrets that her parents hadn’t shared. Her father grew from a small defeated man to one whose generosity became legendary, while her mother, once bitter and angry, proved to be a resourceful and resilient woman able to protect herself and her children.

Bates was also inspired by her parents in her novel Midnight at the Dragon Cafe.

“Set in the 1960s, Judy Fong Bates’s much-talked-about debut novel is the story of a young girl, the daughter of a small Ontario town’s solitary Chinese family, whose life is changed over the course of one summer when she learns the burden of secrets. Through Su-Jen’s eyes, the hard life behind the scenes at the Dragon Café unfolds. As Su-Jen’s father works continually for a better future, her mother, a beautiful but embittered woman, settles uneasily into their new life. Su-Jen feels the weight of her mother’s unhappiness as Su-Jen’s life takes her outside the restaurant and far from the customs of the traditional past. When Su-Jen’s half-brother arrives, smouldering under the responsibilities he must bear as the dutiful Chinese son, he forms an alliance with Su-Jen’s mother, one that will have devastating consequences. Written in spare, intimate prose, Midnight at the Dragon Café is a vivid portrait of a childhood divided by two cultures and touched by unfulfilled longings and unspoken secrets. ” publisher

If you enjoyed The Concubine’s Children by Denise Chong you will appreciate Bates’ moving memoir.

“The Concubine’s Children is the story of a family cleaved in two for the sake of a father’s dream. There’s Chan Sam, who left an “at home” wife in China to earn a living in “Gold Mountain”—North America. There’s May-ying, the wilful, seventeen-year-old concubine he bought, sight unseen, who labored in tea houses of west coast Chinatowns to support the family he would have in Canada, and the one he had in China. It was the concubine’s third daughter, the author’s mother, who unlocked the past for her daughter, whose curiosity about some old photographs ultimately reunited a family divided for most of the last century.” publisher