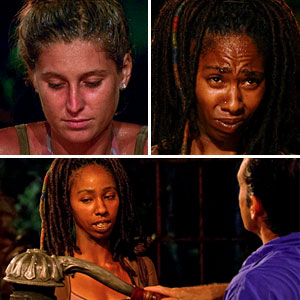 If you read my review from this morning, you know I was pretty peeved at the fact that NaOnka and Kelly Purple up and quit Survivor on day 28 of the game. OK, I was more than peeved. I was furious. And speaking with the women this afternoon did nothing to redeem them in my book.
I was, quite frankly, bored during this conference call interview. I had expected that NaOnka’s exit interview would be one of the most interesting ones, or at least one of the most quotable. But I found the interview almost sickeningly tedious because I couldn’t stand to listen to them praise themselves and justify their decisions any longer.
I’ve long said that it bugs me when a voted out player gives me the classic “I have no regrets” line. You lost the million bucks. You got voted out. Is there really nothing you would have done differently? I gave props to Brenda for acknowledging where her game could have been improved, and I think if anyone were to return to play a second time it should be Brenda since she learned from her first time around. NaOnka and Kelly? You could write what they know about the game on a thimble.
Here’s an assortment of quotes from NaOnka:
Oh, where to start, where to start? I’m not surprised that NaOnka was without regret. She’d already shown herself to be selfish and immature. But that doesn’t make me any less annoyed. She didn’t HAVE to leave the game, as she said. She chose to leave the game. She quit. Quitting for reasons other than health or personal emergency are weak. And it shouldn’t be a newsflash that NaOnka nor Kelly had much of a shot at winning. Maybe, maybe, if they’d gone to the finals with each other and Dan. Maybe. And why is she glad that the period of her life where she fought with a one-legged girl, cried a whole bunch, stole socks and food, and then quit in the final stretch is documented? Why is she so proud?
Here’s what Kelly Purple had to say. Not surprisingly, she didn’t say much.
Are you shocked that Kelly hadn’t seen any Survivor before heading out to play? No, of course not. It was obvious in her lack of game play. Just hearing her criticize Alina, Marty and Brenda’s strategy makes me want to throw something at her.
NaOnka confirmed that she still holds her job as a PE teacher and that no one had a problem with her behavior on the show. She also spoke a little about Kelly B., saying that she was “a boring, bland person”, that she didn’t like her, but that she “is an awesome and amazing woman and she’s strong as hell.”
Once journalist on the call asked the question I was dying to know the answer to – through what process did they make it on the show? Kelly said “I’m not sure I can really discuss that. Being able to talk to the right person is what it really came down to.” NaOnka added “I went through the same process as everyone else.”
Screams “recruit”, right? Lots of contestants this year have said they’d applied for the show. If they had applied, they wouldn’t have declined to answer. Which just adds to my argument that recruited contestants do not play with as much strategy and drive as applicants.
Thoughts? Are you as annoyed by these girls as I am? Am I overreacting to their lack of regret? Also, check out the Ponderosa videos from this week. I won’t write a full post as there isn’t much to say, but I’ll leave you with this: I completely empathized with Alina’s anger, and I admired Brenda’s ability to take the high road. If I were them I would have been furious.