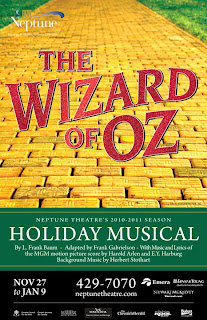 One of the great things about being a blogger (and something I never expected) is that occasionally people offer you stuff. And recently, I had the pleasure of being offered two tickets to a local production of The Wizard of Oz.
The funny thing is, I had already purchased tickets to the show. I'm a huge fan of Neptune Theatre, so of course I responded to the offer with an immediate "Yes!!" I didn't have to write a review to attend the show, but because I know I have a lot of readers in Halifax I decided that I would.
This blog is about TV, which I love, but I love other things too. Books, movies, podcasts, etc. And I've always, always loved live theatre – especially musicals. I've had the great pleasure in life to have seen several shows on Broadway in New York, but I've always loved going to Neptune as well. Ever since I was a kid and went to shows on school field trips, I've known that I'm really lucky to have grown up in a city with such a vibrant local theatre. 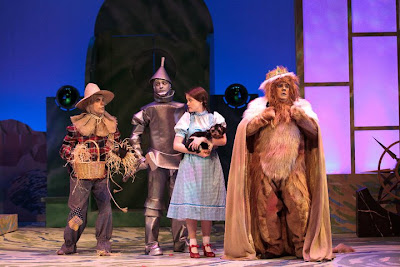 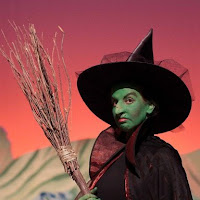 The Wizard of Oz was, in a word, magical. I had high expectations since I'd been blown away by Neptune's production of Peter Pan back in the spring. The Wizard of Oz had fantastic singing and dancing and stunning sets and costumes. All the actors did such a great job, too. Blair Irwin, who played Dorothy, has a gorgeous voice. And Laura Caswell had fantastic energy and a great cackle as the Wicked Witch of the West. My favorite, though, was Stephen Roberts as the Scarecrow. He was a great dancer, he was funny, and I sensed a little vibe between him and Dorothy. (Right?)

Really though, the whole cast was fantastic. Children played the munchkins, and they were much better than the time I played a munchkin in a school play. My "Ding Dong the Witch is Dead" was not nearly as enthusiastic or, you know, good. Plus there were hilarious crows, sexy apple trees and an adorable (and incredibly obedient) dog playing Toto.
So this is the part of the review where I get a little sappy. As much as I love to sit on the couch and watch TV, I also love to go out and see real people perform live right in front of me. So support your local theatre. If you live in Halifax, check out "Pay What You Can Night" or treat yourself to tickets and a fancy night out. It's a wonderful and memorable experience. I brought my friend Aimee, who'd never been to Neptune before, to the show and she loved it. And if you don't live in Halifax, find your own local theatre and check out a show. You won't regret it.

The Wizard of Oz at Neptune Theatre - A Magical Experience
https://haligonia.ca/the-wizard-of-oz-at-neptune-theatre-a-magical-experience-29893/