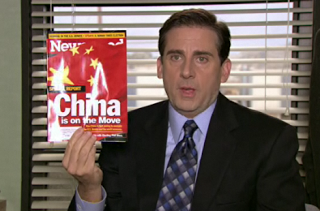 This episode of The Office was all about turf wars. Pam battled Dwight about the new unpleasant working conditions in the office building (which he owns), and Michael debated with Oscar about whether China was a big threat to the United States.
This was a low-key episode, but I liked it. The Dwight-Pam relationship has always interested me since they had a weird little secret friendship despite the fact that she married his worst enemy. And I’ve always liked Oscar because I think even though I want to think I’m a Jim, I’m actually more of an Oscar.
When everyone was fed up with Dwight’s “green” (as in money-saving) changes like no heat, half-ply toilet paper, motion-sensing lights and a huge billboard for cockroaches, Pam tried to take action. As the new office administrator, it’s her job. She couldn’t reason with Dwight though, so she had to threaten to move. She wooed everyone in the office with a description of a new, better office building that was near a bike path, an Outback Steakhouse, a Korean-run nail salon and a Caucasian-run dry cleaners. The only problem was that the ideal building was actually a bluff to get Dwight to concede. Which, of course, he knew. The sweet part came when Dwight overheard Pam confide to Jim that she was afraid of failing again (like she did with art school and sales). Dwight sneakily gave Pam the information she needed to get the building back to normal. He said he didn’t do it for compassionate reasons, but we all knew better.
Meanwhile, Michael had a wealth bit of knowledge about China after reading an outdated Newsweek article about their infinite powers. He outsmarted Oscar “Actually” Nunez, the office know-it-all, and impressed everyone. I loved seeing everyone rally around Michael since he’s usually the doofus everyone mocks. Jim, Andy and Ryan prepped him for a follow-up conversation, which Michael rocked…until he dropped his cheat notes. Such an amateur mistake. Then Michael made a weird patriotic speech about how America is great because they can have conversations, and it was funny because it was just so typical of Michael Scott.
The sub-sub-plot was the best, though. Darryl told Andy he was sending too many unnecessary texts. I love Darryl anytime, but he and Andy are both at their best when they’re interacting.
Here’s some other hilarious moments and lines from the episode: