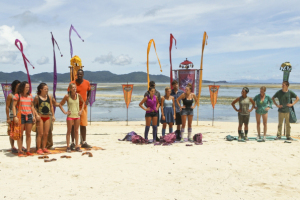 Brawn, Beauty and Brains no more.

“Drop your buffs!” I always have mixed feelings about those words on Survivor. On the one hand, I think scrambling the tribes interferes with the hard work everyone has been putting in all season.

Relationships and strategy can become moot just because you ended up on the wrong end of the buff draw. On the other hand, did we really want to see the Brains tribe get decimated for another week in a row? Nope. 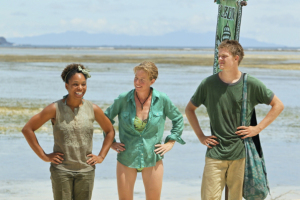 This was a funny split. The Brains tribe remained totally in tact, thus everyone from that group went from being total underdogs to being in a pretty damn good position. (Especially given how everything went down later.) The Brawn tribe, except for Sarah, stayed together. Alas, it was the Beauty tribe who really suffered here. They were totally broken in two, and did some more fracturing of their own later on.

I think it might be for the best that Sarah ended up on her own. It got her away from that liar Tony, and as the strongest woman on her tribe (and possible swing vote) she’ll probably be safe for a while. The downside to these new tribes is that, at least this week, the Purple tribe had a big strength advantage. And we saw that work to their advantage during the Reward Challenge. 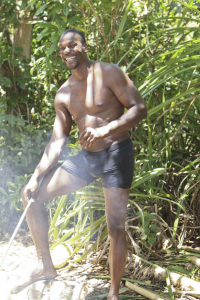 This is a tall man.

For the Reward Challenge, one player had to try and stay on a pole while two members of the opposite tribe attempted to remove him/her and drag the person past a line. The Orange tribe only had two men, and it hurt them. They always had their dudes doing the dragging – and sure, who else are you going to have attempt to move a giant man like Cliff? But that meant they had a woman on the pole, and twice that woman was put up against a male/female tag-team. Even a tough chick like Sarah didn’t stand a chance. (And Cliff was basically unmovable.)

The Purple tribe won, and were rewarded with delicious-looking coffee and pastries.

Getting To Know You 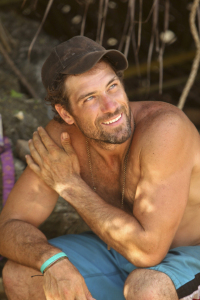 It was fun to see the social dynamics of the new tribes unfold. Over at the purple tribe, Trish immediately bonded with LJ when she discovered he’s also from Boston. Oh, and also because he’s dreamy and she has a major crush on him. She was so moon-eyed, it was a little embarrassing – especially since everyone, from LJ to her tribemates, could see right through her. Later, Trish also buddied up to Jefra, and bad-mouthed Cliff.

At the Purple tribe, Morgan was immediately caught in her former lie when her new tribemates revealed that they have extra rice because Trish chose it over the Hidden Immunity Idol clue. Alexis was floored – what, because she and Morgan are such BFFs? It could hurt Morgan in the game, since players will distrust her and might try to flush out an Idol that she never found.

Looking at the Purple tribe, you’d think it would break down pretty easily. The three Brains and the three Beauties would compete for Sarah’s swing vote. But no! The Beauties live up to their reputation once again. They all immediately turned on one another, secretly badmouthing each other and pledging their allegiance to the brains. It was amazing! I’ve never seen people flip so fast, and so unnecessarily before. Sarah never even came into play.

(I don’t know guys, I struggled with that sub-header.) Immunity Challenge time! Thank god, it was better than the Reward Challenge. In this one, players had to smash through some walls with a giant log – pretty easy for a tribe whose motto could be “Hulk Smash”. But then, they had to solve a maze that was carved into the log. This is where the brainy/beautiful tribe made their comeback. They left Team Purple in the dust and won Immunity! A relief, obviously, for those loser Brains. Probst didn’t waste any time rubbing that in.

It seemed obvious that the Purple tribe would vote out Jefra – after all, LJ is useful in challenges and they’d want to keep their brawny numbers high. But in fact, Jefra’s name never really came up. Most of the tribe wanted to vote out LJ, seeing him as a physical and social threat. He has friends on the other tribe, and Trish was all over him. Woo and Cliff wanted him gone and, of course, Trish thought otherwise.

Trish told LJ that her and Tony wanted Cliff out – but leading up to Tribal Council, LJ wasn’t sure that Tony was on board with the plan. I assumed that LJ would play his Hidden Immunity Idol, just to be safe. How could you trust people you just started playing with so much?

But LJ didn’t play his Idol, and Tony did vote out Cliff. Wow! It’s definitely not how I would have predicted this would all go down. I’m bummed that Cliff is gone, because he seemed like a nice guy and a good player. I also feel bad for Woo, who’s a strong player that’s now on the outs. Who would have thought that TRISH of all people would find herself in a position of power? I can’t wait to see things blow up between her and Lindsay next week.

What’d you guys think of the episode? Comment below!

Survivor – Shake It Out
https://haligonia.ca/survivor-shake-it-out-90967/