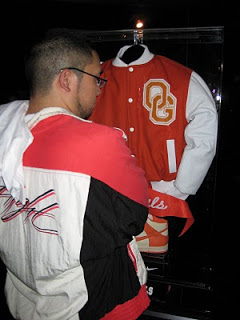 If you need your weekly fix on all things about Canadian basketball, Ray Bala (aka @canballreport on Twitter) will provide just that.  The dude does his thing, keeping the internet hoop heads informed on where the Canadians are playing in the NCAA, what’s happening in the CIS and even what’s happening with the Canadian PBL teams (i.e. my hometown Halifax Rainmen).  I had the chance to speak with Ray on his love for Canadian basketball, his thoughts on the Raptors and a little bit about his sneaker love.

Romy (Haligonia.ca): You have been one of the biggest supporters of the Canadian basketball scene that I’ve seen on the net. Whether you’re spreading the word via Twitter or on RaptorsHQ, you’re definitely keeping people informed. Where does that love for Canadian basketball come from?

Ray Bala:  To tell you the truth, I think it’s really because I love the game of basketball and seeing local guys get out there and represent being a Canadian baller on a higher stage. I’m not the kind of person that has really liked the NBA game like most people do growing up. Now I’m dating myself a little here, but when I was growing up I really didn’t have the amount of basketball available to me. I mean, back in the “early” days of cable TV you really only had whatever the American channels were showing on the weekends and the odd Monday or Thursday night and that meant either NBA or if you were lucky NCAA too. I didn’t have League Pass, live web feeds or stuff like that. All the basketball I watched was either on NBC/ABC/CBS or on the playground.

Now I grew up in Toronto, Scarborough to be exact, and I would hear about local guys all the time who were really good. Sometimes I’d even play against them in the playground or the rec centers and I’d hear that they had scholarships to this or that school so I would just try to follow them since they were local cats, like most people would of their own hometown heroes if you will. So when I would read about guys like Rowan Barrett at St John’s in the early 90s making noise at St John’s or Damien Reid at St Joseph’s and Dale Sawyers at Canisius in the mid 90s I would just feel a sort of affinity to them because they were local guys getting to the next level. Pretty soon it didn’t matter where they were from as long as they were Canadian. The same affinity is still there for the baller from Vancouver to St John. Like Adidas says, this is a brotherhood (or sisterhood) and my love for the game and for Canadians doing big things in and for the game really stems from that. Now it’s just a matter of spreading the good word of our boys and girls doing their thing to people who may not be aware and trying to get that same pride I have of our local ballers into more people.

Romy (Haligonia.ca): We’re just a little past the halfway point of the NBA season, break down your thoughts on the Toronto Raptors so far.

Ray Bala:  I think the Raps have been a Jekyll and Hyde team though they have picked it up of late with a couple of timely wins against some big time teams. The team should definitely be playing better against certain opponents but I guess the Raps are still in the feeling out stage for some reason. They seem to be either weak or strong and haven’t really found the middle ground that good teams get to when they are legit threats in the post season. If they can get a consistent effort from role players and extra effort in some key areas from the money players not named Bosh I think the team would be playing better. If certain players can play their games, as they are being paid (read Hedo), and other guys accept their roles and play within them unless needed, we should be good for a deep playoff run.

Romy (Haligonia.ca): Steve Nash has done wonders for the Canadian basketball scene, do you see any up and coming ball players that will be able to fill his shoes?

Ray Bala:  I know I’ll hear about it from people but at this point, I don’t think so. There are a lot of good, promising young players playing right now in high school and in the NCAA that can help elevate the profile of the game in Canada but none I would consider right now as the guy to fill Nash’s shoes. There are a lot names of people at many levels that I’ve been hearing about for a few years and I really think that the idea of someone filling Nash’s shoes in terms of a basketball icon in Canada is a little far fetched right now. People are always looking for the next Nash, but Nash is a once in a lifetime player in my mind. He may be the most regular looking, anti-LeBron type guy but managed to become this larger than life basketball god, particularly in Canada. Now don’t let this mean that I don’t think it will happen, because I really hope it does, but no one can fill his shoes any time soon. We had to wait a long time for another Gretzky and the guys who followed him that had promise never came close to touching his legacy. There are many promising players, but none right now with that combo of game, charisma and presence to pull it off.

Romy (Haligonia.ca):  Who is your favorite current Canadian ball player that isn’t playing the NBA?

Ray Bala:  Now that’s a tough question. There are a bunch of guys that I could choose from and I was never a guy to play favorites but right now it may just be have to be Tyler Kepkay from Vancouver. Here is a guy who was playing on Canadian National Team for two straight summers and he’s a lights out shooter. This dude can straight stuff a stat sheet! Coming out of high school, he had some low D-1 and D-2 offers but he decided to skip on them a take a chance and play at a Junior College to get to a better school. Crazy right, especially for a 5’10” guard! But he ends up as a JuCo All American, First Team might I add, and lead the country in scoring his second year and gets an offer to play at Utah who at the time had Luke Nevill from Australia there. He starts there in a more subdued offense so his numbers don’t reflect his contribution. This guy is all heart and can flat out play the game. He’s playing in Europe right now and he’s also a great person. I’ve seen him the past few summers at the Canada Basketball training camps and he’s always said hello and stopped to chat. He’s really genuine.

I have other guys in mind like Russell Hicks from Niagara Falls, Tristan Blackwood from Toronto, Jesse Young from Peterborough, ON and Levon Kendall also from Vancouver but Kepkay is the guy right now.

Romy (Haligonia.ca): Gone are the days of Bryant “Big Country” Reeves and Shareef Abdur-Rahim playing in Van-city, do you think we’ll ever see a second Canadian franchise in the NBA? What will it take to make it happen?

Ray Bala:  Bring back Big Country, Reef and Lawrence “Poetry in” Moten please!!! But seriously, I’d love to see another NBA team in Canada but I just don’t think that there is that kind of support just yet from a fan base perspective. I mean, if you take a look at the Vancouver situation, everything there was great in terms of what a pro would want in a pro city: climate, facilities, and management. But the fan base still didn’t come out to support the team on a nightly basis. Really, I think the novelty of an NBA franchise wore off after a while and with the team not winning much and seemingly not making any progress towards winning in a big way, the support fizzled.

For another market to be able to support an NBA franchise there would have to be a great, continuous and supportive fan base period. The environment would need to be small town for this big city team if you know what I mean. If another Canadian city could bottle up the energy of a Halifax Rainmen game and fill a stadium of about 18,000 people with that energy and enthusiasm and the franchise to be able to sustain that energy year in, year out for the early part of the franchise than a team would be able to stick around. Well that and a bunch of owners that have deep pockets and aren’t afraid to take a risk.

Romy (Haligonia.ca): I know you’re a sneaker buff, what was your favorite pair that you rocked when you were younger?

Ray Bala: Another tough question. Again, I’m dating myself but it would be a toss up between the OG Jordan V Grapes I got the summer of seventh grade on a trip to Florida or the OG Air Flight Huarache basketball in black and purple. Those were my two favorite pairs back in the day when I thought that paying $145 for a pair of ball shoes was just simply nuts! Both were tough kicks and in the case of the Grape V’s, they weren’t being sold in Toronto until two weeks after I got back from my trip so I had older guys just staring at my feet for hours. Both were crazy comfortable and they lasted me almost 12 months each including wearing through snow and rain and in the case of the Huaraches, through one extra year of working the front line of a Wendy’s. I still have the OG boxes for those bad boys and the OG lace locks from the Grapes!

A close second would have to be my only pair of Patrick Ewings. I got those in time for basketball season and they were all black with the only color accent coming in the white of the Ewing stitched autograph on the outside above my ankle. Now I’ll be the first to say it here, I was the first and only dude I knew that rocked Ewings before they started coming in suede and in those crazy colorways. Sorry ‘Trick but those joints were really wack!
__________

A huge thanks goes out to Ray for taking the time to chat.  Be sure to check him out everywhere, he’s on RaptorsHQ.com spreading the Canadian hoop word, he’s on Twitter as @canballreport and he can also be found at SlamOnline.com writing about Canadian ballers.