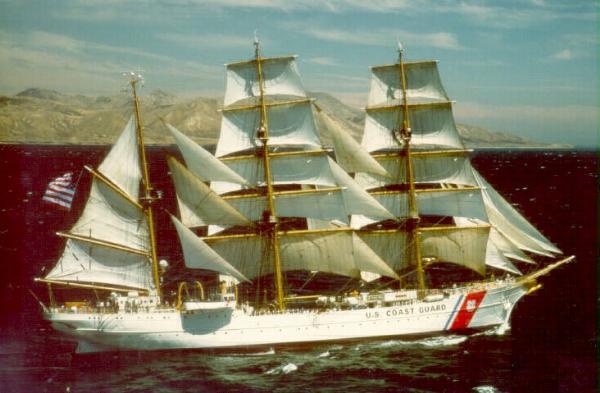 Over the next 30 days leading up to Tall Ships Nova Scotia 2009, we will be featuring Q&A’s with some of the members of the ship’s crews.  In the first of our series, we talk with Lieutenant Chris Nolan, Navigator of The Eagle.

THE EAGLE is has a permanent crew of about 65 and takes on up to 150 trainees at a time each summer.  As is to be expected with a group of young sailors, as long as there is no specific work to be done and decent weather to be had, a typical Saturday night usually involves one group of cadets cooking pizza for the rest of the ship, followed by either a talent show or karaoke night.  Other Saturday nights sometimes feature live music by some of EAGLE’s musicians (we have a full drum set, electric guitars, ukulele’s, mandolins, bass guitars, etc. etc).  All in all, Saturday nights aboard EAGLE are usually pretty fun (gale force winds excluded)!

Where was the nicest port you’ve last visited?
The nicest port we’ve visited recently in my opinion was Monaco, Monaco.  They were getting ready for the Grand Prix race, and the whole city was ablaze with excitement.  Our trainee crew was able to experience European culture for the first time, and by all reports it was a fantastic portcall.

What would you say is the best meal prepared aboard your ship?
The best meal we have had during the trip from France to Bermuda has by far been the clam chowder lunch prepared by our Food Services Specialist Chief Stacey Russell.  She is an award winning cook and took the time to make a huge batch of chowder (over 230 crew) during an especially lonesome stretch of the mid-Atlantic…it made our day!

What is your crew most excited about of your visit to Halifax?
Our crew is most excited about Halifax’s nightlife.  After a long cruise, there is nothing more relaxing than stepping off the ship with your good friends and enjoying a beverage along the waterfront while watching ships and boats move in and out of the harbor.  Additionally, being a military ship, many of our crew enjoy the opportunity to run and exercise while ashore, and being able to jog through the streets of a foreign city is quite an experience.

What does the majority of your crew enjoy most, life at sea or life on land?
That is a tough one.  There is a core group of crew that truly enjoy life at sea, but I think a majority of us would say that life at home is made all the more special once you are away from it for a while.  There is a famous poem that begins "Home is the sailor, home from the sea…"  I think it is very true…when you are out to sea and away from home for a long time (4-6 months for EAGLE), despite foreign port calls and awesome experiences, going home at the end of the cruise is a special feeling.

Tall Ships 2009: A Conversation With The Eagle
https://haligonia.ca/tall-ships-2009-a-conversation-with-the-eagle-2970/