Will the New York Islanders Take Tavares?
All logic would suggest that the Islanders will take Tavares with the number one pick in this year’s NHL entry draft. However, there is a growing suspicion that the Isles will take top defensive prospect, Victor Hedman, a 6’6” 220 pound blueliner from Sweden.
The knock on Hedman is that he’s not very physical. However, he has received comparisons to another Swedish defenceman whose won a few Norris trophies and Stanley Cups; Nick Lidstrom.
If selected, Hedman is up for the challenge, “I can score goals and bring other stuff to the team. Good leadership, and I can play a lot of minutes and kill penalties and shut down the other team’s best guys. If I’m going to the Islanders, I’m not satisfied unless we make the playoffs next year.”
Plus Hedman has expressed an appreciation for Long Island and marvelled at its physical beauty in an interview last week, “Long Island was a great area. The beach was great, the houses. I really love the water. I would love to live by the ocean. I got to see Rick DiPietro’s crib, and it was real nice. I saw the Coliseum as well. It’s pretty old, but it’s got a great history.”
Smart talk from a pretty grounded young man who some are calling the best defensive prospect since Chris Pronger.
Ironically, it was 1993 when the Ottawa Senators had the first overall pick and selected Alexander Daigle instead of Pronger, who Hartford scooped up with the second pick. We all know how that worked out.
So the NHL draft could be a pretty intriguing storyline as the Commissioner takes to the podium to announce the New York Islanders selection. The Long Island faithful are begging the Islanders to take Tavares. Understandable considering the team’s leading scoring forward last year was Kyle Okposo with 39 points!
39 points!!
If you’re a fan you want to see offence and Tavares is the most talented offensive player in the draft. And at 6’0” 200 pounds he’s no Alexander Daigle. Offence or defence? Stability or flash? The last time the Islanders were faced with this decision they took Rick Dipietro, bypassing Dany Heatley.
The Islanders hope they don’t make the same mistake again. 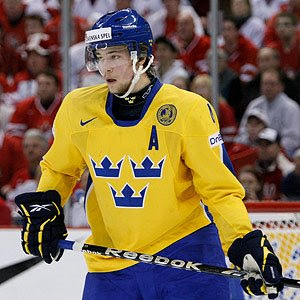