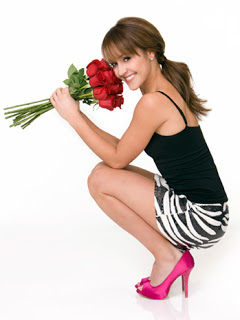 It’s that time again, folks! The time when The Bachelorette visits the hometowns of her four remaining guys, and we at home try and decide who has the best family, the weirdest family, the richest family, and more. But first! First, we get to see Ashley in her New York apartment. Was that really her apartment? Since when does she live in New York? Is that really all the mail she got while she was away? So many questions that will never be answered.

Before jetting off to visit her men, Ashley has to review what she likes about all of them. Ben is gorgeous, physically her ideal man. Really? Same goes for Constantine, obviously, as he’s basically Ben’s mirror image. Only slightly less attractive, so again I say really? Ames is “different” and JP…OK, I forget what she said about JP. Hopefully something about his suppressed anger issues. OK, let’s get to it!

Next, Constantine took Ashley home to meet his family, including his dad Dimitri and his mom Elania. I thought Constantine’s old-school Greek parents might have some reservations about their son engaging in a whirlwind televised romance, and they briefly voiced some concerns about rushing into things, but they got over it pretty quickly. Elania’s main concern is that Ashley would be willing to relocate to Georgia – because, you know, when it’s The Bachelor the girls all have to be willing to relocate should they be chosen, and when it’s The Bachelorette the girl has to be willing to relocate for whichever guy she chooses. Or at least that’s the assumption.

Before Ashley and Constantine left, the rest of Constantine’s family came over – like, easily 30 people. It was definitely like a scene from My Big Fat Greek Wedding, I was waiting to spot Andrea Martin the whole time. Ashley loved it though, since that girl will jump at any opportunity to dance.

Next Ashley met up with Ames in Chadds Ford, Pennsylvania. Ames ran towards Ashley in a regrettably girly way while wearing a regrettably small plaid shirt, and they went for a picnic.

When Ashley met Ames’s family, they were very protective. Big Sis grilled Ashley about her other relationships, her feelings for Ames, her hopes for the conclusion to everything. And then she ran and recited their whole conversation to Ames, along with helpful hints about how he should make sure to show more of his personality since Ashley said their relationship was progressing slower than the others. Despite singing his praises to Ashley, though, Ames’s sister couldn’t seem to convince Ashley what a catch her brother is. After the date, Ashley said she didn’t feel the same passion with Ames that she did with the others, despite wanting to.

Before leaving Pennsylvania, Ames took Ashley on a horse and wagon ride. Um, was that like, on his property? Like at his house? There just happen to be four horses, a wagon, and a costumed driver waiting around to take you on a ride? Whenever you want? Can I move in?

Third, Ashley visited Ben in Sonoma, California. They toured his winery where they drank a bit of wine, had another pseudo-picnic (because you never see these people eat!) and talked about how it would be a total deal breaker if Ben’s mom and sister didn’t like Ashley. But no pressure! Ben had only brought one girl home before, but it was unclear if the family had approved of her or not.

Ben’s family seemed friendly and sweet, and his sister mentioned that she was the one who’d signed Ben up for The Bachelorette. “I love my brother,” she said. “He’s dated girls but they haven’t really stuck around for too long, and I haven’t necessarily liked some of them.” Wow! I hope those bitches are watching! She should have named names!

Every season on The Bachelor(ette) there are at least one or two people who seem too good to be on this show. Ames is one, and I think Ben is the other. As he talked to his mom he seemed to be having some kind of real emotional breakthrough regarding his dad’s death that just doesn’t belong on such a skeezy, fake, moronic show. “The first couple years after Dad died, I should have been a better son, and I should have done things differently,” Ben said. “I have regrets about those things… I should have been there more in the beginning.” It was a little startling, how regretful Ben seemed. I mean, what, did he have a heroin problem after his dad died? Why so guilty, Ben?

Ashley’s hometown date with Ben seemed to go well, but I didn’t see her spend a lot of solo time with his mom and sister. Did we just not get to see it in favor of Ben’s tearful apology to his mom for being an ass? What gives?

Finally, Ashley met up with JP in Roslyn, NY (Long Island) – although if she was departing from NY, then I’m guessing JP would have had the first hometown date, followed by Ames in Pennsylvania, Constantine in Georgia, and Ben in California, followed by the rose ceremony in L.A. I doubt ABC is flying Ashley back and forth across the country just so she can sip wine with a bunch of people who will likely never become her in-laws.

JP told Ashley that since it was going to rain, they were going to partake in an indoor activity that would remind them of their childhoods. Bowling? Laser tag? An arcade? No, no, no. Rollerskating? I was overcome with jealousy. Do you know what I would give for a rollerskating rink in my city? A lot! It’s basically my dream to have a disco-themed roller rink birthday party at some point in my life. I missed it for my 25th birthday, so here’s hoping someone in Halifax ponies up and opens a rink before I turn 30.

JP fell right on his butt during the rollerskating, which was pretty embarrassing considering I’d already seen him fall when he tried to pick Ashley up during a group date. What a klutz! JP confessed to Ashley that he’d only ever brought four girls home to meet his mom – considering he’s basically elderly at 34 years old, that’s not a lot of women – but following Ben’s confession that only one girl had ever made the cut, he seemed downright promiscuous. In particular, the last girl he’d brought home had really done a number on him. I was hoping they’d start referring to her as “She Who Shall Not Be Named”, because the way they talked about how badly she treated JP I can only assume that she was:
a) A death eater
b) Michelle Money from last season of The Bachelor
c) One of Charlie Sheen’s “goddesses”

Ashley met JP’s parents, his brother, and his brother’s girlfriend. I don’t think his father uttered a single word during the visit, but his mom was very bubbly. The highlight of the visit, obviously, was when JP’s mom brought out his poster-sized bar mitzvah portrait. He was the smarmiest thirteen year-old ever!

JP’s family expressed some concern that things were moving to quickly, but JP quickly shut them down, saying “If I feel it, yeah. Why not? If I’m in love with her, what’s to stop me from proposing now versus three months from now, six months from now?” Well, Cupcake, the difference is three to six months.

Back in L.A., Ashley had the difficult task of cutting one guy loose without sending an “I hated your family” message. I knew it wouldn’t be Ben or JP, and since Constantine had clearly won the Most Fun Family award, I knew Ames would be sent packing.

Poor Ames looked blindsided when he didn’t get a rose. It was painful. He left with class, but it was still sad. Sorry, Ames. Nice guys finish last, I guess. Better luck next time – in fact, call me! I can totally deal with a melted Ken Doll face if it comes with exotic vacations and at-home pony rides.

Next week, Ashley jets off for a romantic trip with three men! And one contender crashes the party for a second chance. I’m sure the name of that persistent suitor is floating around the internet, but no spoilers please! Now, sound off in the comments and tell me what you thought of the hometown dates!